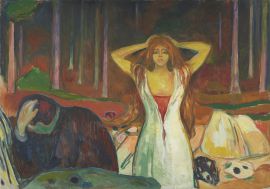 Now that summer is upon us and temperatures have been creeping up into the triple digits in some parts, there’s no better way to escape the heat than by spending a day wandering through a museum. This summer’s art shows take visitors through history, under tree canopies and into audio soundscapes. Here are 11 new exhibitions opening this summer that are worth a visit.

Many people are familiar with Edvard Munch thanks to his famous piece “The Scream.” Edvard Munch: Between the Clock and the Bed gives museumgoers an extensive look into the late Expressionist artist’s body of work, including 45 paintings of which seven will be on view in the United States for the first time. The collection focuses on a number of repeated themes Munch visited in his paintings, including love, attraction, sickness and mortality, and these topics are often displayed in his self-portraits. The exhibition is co-organized by The Metropolitan Museum of Art and the Munch Museum.

Amon Carter Museum of American Art—The Polaroid Project: At the Intersection of Art and Technology
(Fort Worth, Texas; now—September 3, 2017)

Long before Snapchat, there was the Polaroid camera, a portable way to document memories without having to search for a solid Wi-Fi connection. In a celebratory nod to the second half of the 20th century, The Polaroid Project: At the Intersection of Art and Technology takes an in-depth look at the camera giant’s history through a collection of approximately 150 photographs by more than 100 artists, such as Barbara Kasten and Robert Mapplethorpe. Also on display: cameras, prototypes and items from Polaroid’s own archives.

Bold, dynamic, engaging and energetic are just a few words used to describe the works of Alexander Calder, a 20th-century American sculptor who is credited for creating the first mobile. Calder: Monumental delves into the late artist’s abstract steel-plated designs, which critics and fans alike praise for their geometric shapes and curved lines that shift depending on the angle in which they’re viewed. For this exhibition, the Denver Botanic Garden has selected some of Calder’s most monumental pieces, which will stand in juxtaposition to the garden’s natural setting.

It’s been 50 years since the Detroit riots, and the Art of Rebellion: Black Art of the Civil Rights Movement commemorates this challenging time in the city’s history. This exhibition includes powerful artwork created by members of black artist collectives from places like Chicago and Harlem who were involved in the Civil Rights Movement of the 1960s and ’70s, and it touches on topics such as the importance of inclusivity, the fight to eradicate misrepresentation, and racial justice.

The New Mexico Museum of Art has partnered with London’s famed British Museum for an exclusive collection of drawings that spans from the 15th century to today. Notable artists include the late Leonardo da Vinci, Michelangelo, Pablo Picasso and Barbara Hepworth, along with living artists Bridget Riley and Rachel Whiteread. The combination of artists past and present emphasizes the continued importance of drawing during the creative process. Worth noting: The exhibition will be making only two stops in the United States, with a show this fall at the Rhode Island School of Design Museum in Providence.

Sonic Arcade: Shaping Space with Sound explores sound and how it plays a pivotal role in our daily lives. Using interactive installations, immersive environments and performing objects, this exhibition examines the transportation of sound through vehicles like electronic circuits and signals, radio waves and resonant bodies, and it gives viewers a chance to experience the unlimited potential of sound.

While many artists are classically trained in their medium of choice, some forego schooling and learn the craft on their own. A Shared Legacy: Folk Art in America showcases the work of these self-taught or minimally trained artists by featuring 60 artworks created between 1800 and 1925. The collection includes portrait and still life paintings, sculptures and signs, many of which were created during times of political and social turmoil as the United States continued to develop as a nation.

Technology is artist Shih Chieh Huang’s medium of choice, taking high-tech items such as circuit boards, wires and computer hardware and morphing them into colorful and engaging pieces of art in a way that causes users to consider modernity in a new way. For Reusable Universes, the Taiwanese artist plans to create his most ambitious design to date. Called Organic Concept, the performance piece will incorporate more than 100 elements into his sculpture, from painter’s plastic to box fans, which he will build in front of an audience in the museum’s lobby on July 20.

For years, Jacques Lowe served as President John F. Kennedy’s personal photographer, giving him behind-the-scenes access to the First Family. For this photographic exhibition, which is in conjunction with the Newseum in Washington, D.C., and the Jacques Lowe Estate, expect to see a selection of the more than 43,000 photos Lowe shot over the years. Most of Lowe’s negatives and photos were destroyed during the September 11 attacks as they were stored in Building Five of the World Trade Center, except for ten negatives that were out on loan at the time. Luckily, Lowe kept a portion of his contact sheets and prints in another building, some of which are on display.

Fonts are all around us. From books to billboards to what we see on our computer screens, fonts are a form of communication and are often the first thing we associate with a brand. House Industries: A Type of Learning celebrates the spirit of innovation and focuses on House Industries, a group of designers known for creating fonts for brands like Hermès, Muji and Uniqlo, as well as numerous album covers, magazine covers and even cereal boxes.

The Hirshhorn Museum and Sculpture Garden has two major exhibitions planned for this summer. The first, “Ai Weiwei: Trace at Hirshhorn,” features “Trace,” a grand-scale installation originally displayed at Alcatraz Island in San Francisco that features 176 portraits created using Lego bricks that depict individuals who Weiwei feels deserve recognition for their work on human rights. The piece also plays homage to Weiwei’s own experience as a detainee. The artist was held by the Chinese government for 81 days in 2011. The show will also feature new 360-degree installation entitled The Plain Version of the Animal That Looks Like a Llama but Is Really an Alpaca. The work, which appears at first to be ordinary decorative wallpaper, hides symbols of suppression and subterfuge: surveillance cameras, handcuffs and Twitter bird logos​.

Also opening is “Summer of Yoko Ono,” which celebrates the ten-year anniversary of the artist’s “Wish Tree for Washington, D.C.,” a interactive display where visitors can add wishes in writing. Joining this popular work will be “My Mommy Is Beautiful,” a 40-foot installation where viewers can post photos of their own mothers or express a memory in writing by pinning it to a canvassed wall, and “Sky TV for Washington, D.C.,” a video installation that records the sky outside by airing a 24/7 live feed.

Moscow State University plans to beef up admissions to record-high 10,000 students in 2017MMA Champion Amriev is taken to Chechnya