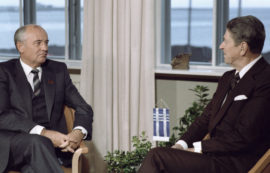 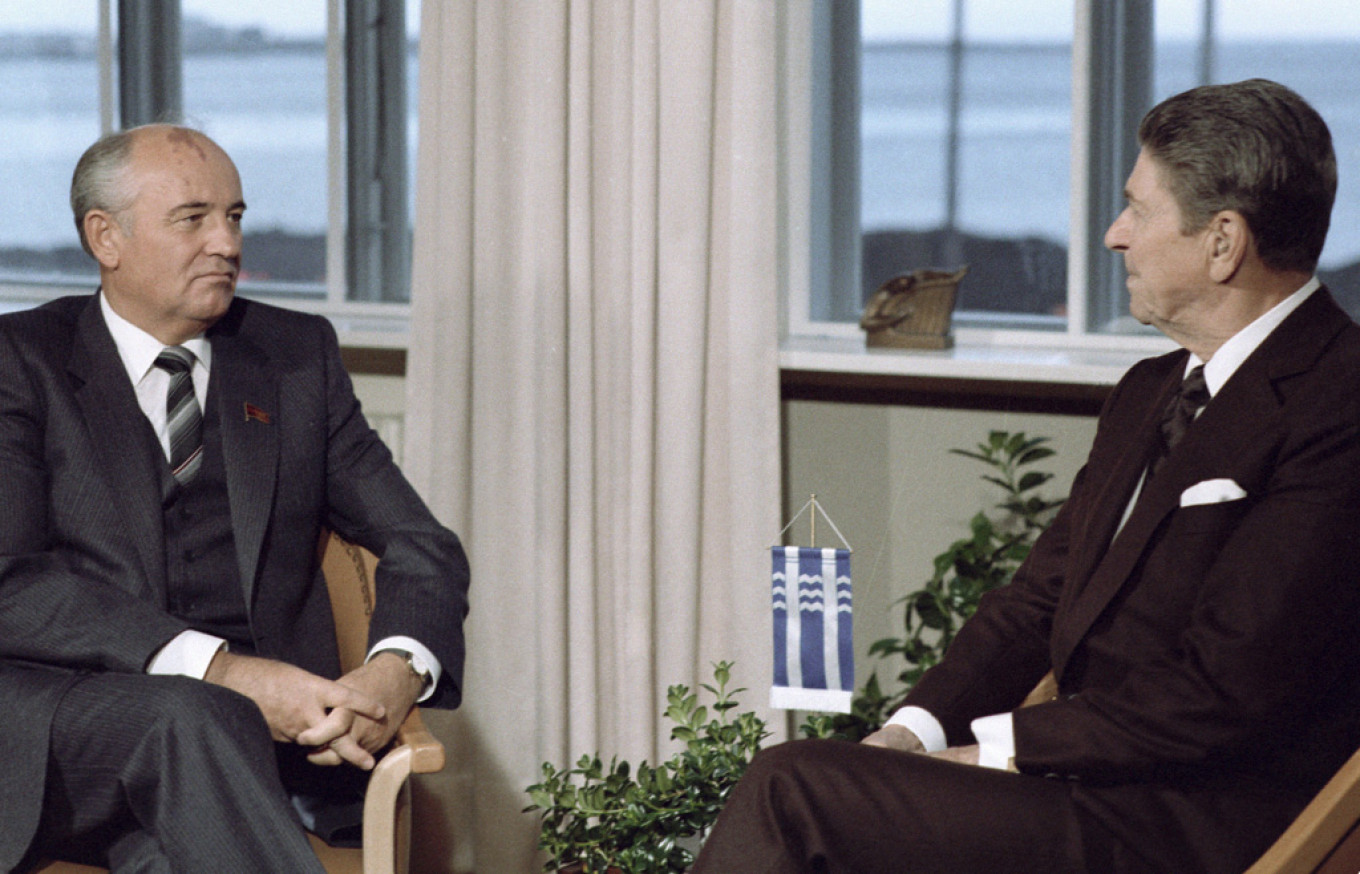 In “1983: The World At The Brink,” Taylor Downing delves into one of the most pivotal years of the Cold War, when escalating brinkmanship between the Soviet Union and the United States nearly caused nuclear apocalypse.

Downing is a historian, award-winning television producer and writer who has penned best-selling books on both world wars and the Cold War. He worked at the Imperial War Museum and Thames Television and then for more than 25 years he ran the highly successful independent television production company, Flashback Television, where he produced more than 200 historical documentaries. His books on 20th century history have been bestsellers.

During the titular year, Downing writes, the Soviet Union and the United States pushed themselves closer to mutually assured destruction than they had ever come before. Not even the standoff of the Cuban Missile Crisis of 1963 had brought the countries as close to all-out nuclear annihilation.

“This is the story of the time when fingers really did hover over the nuclear button, when the world really was ‘a button push away from oblivion,’” the book’s introduction reads.

Soviet leader Yury Andropov, the ailing former KGB head, saw Reagan’s aggressive rhetoric as evidence that a U.S. attack on the Soviet Union was imminent. He put the KGB on alert to look for signs of nuclear attack. When a Soviet fighter jet shot down Korean Air Lines flight KAL 007 after straying off course over a sensitive Soviet military area, President Reagan responded by calling it a “terrorist act” and “a crime against humanity.”

The tension comes to a head when the Soviet nuclear arsenal was put on maximum alert in November. The Soviets’ early warning system had malfunctioned, Downing writes, by interpreting the sun’s reflections on clouds in the American Midwest as a sign that missiles had been launched.

Missiles were deployed to action stations in submarines and mobile launchers; aircraft were put on standby; and silo commanders were preparing to launch dozens of missiles — each one of which had hundreds of times the explosive yield of the Hiroshima bomb.

And then on the night of Nov. 9, NATO requested permission to use the codes to launch nuclear weapons during a military exercise called Able Archer 83. As this information poured into the Kremlin, Soviet leadership convinced themselves this was not a simulation, but the real thing. And because there was virtually no contact between the two countries, there was no way for either side to understand what the other was thinking.

At this point, all the Soviets needed to launch a full-scale nuclear assault was Andropov’s sign-off.

Downing’s book recounts these events at a breathless, breakneck pace, a reflection of the speed at which tensions escalated and got out of hand between the two superpowers. At the same time, Downing spares no detail in his recounting. He tells this story in its full scope for the first time after he gained access to hundreds of new documents released in the U.S.

The book is at once an intimate portrait of two leaders at odds and the detailed story of a largely unknown Cold War episode made up of intelligence failures, misunderstandings and human error. The real-life events of what happened during 1983 serve as a terrifying example of how brinkmanship can so easily lead to nuclear obliteration. It is essential reading for not just those interested in Cold War history, but for anyone who has a hand in foreign policy between Russia and the U.S. today.

Throughout the summer of 1983, Yuri Andropov’s health had been giving rise to growing concern. In desperate need of a break, the Soviet leader had left Moscow just as the Korean airliner crisis was about to erupt, looking gaunt and haggard. He went not to his normal holiday dacha at Kislovodsk in the North Caucasus, near to the region where he had grown up, but instead to a luxury villa kept aside for the leadership on the Crimean coast not far from Simferopol. With him went not only the key staff he needed to keep up with his vast workload but also an entire medical facility. Andropov was seriously unwell, suffering from a kidney problem that was made worse by his weak heart, and was finding it more and more difficult to walk, especially to go upstairs. Even to climb the few steps for the lift to his office at the Kremlin caused him difficulty, and he felt embarrassed if seen by others when his bodyguards helped him. He did not want people to know about his condition.

An American specialist, Professor Rubin, was called in   and confirmed the diagnosis of the Soviet doctors that his kidneys were failing, and that he needed treatment with a dialysis machine. Such machines were rare in the Soviet Union at the time but the party leaders lacked for nothing: the latest technology was always available to them. So Andropov began the process of dialysis every few mornings: blood was removed from his arm, pumped through a machine that filtered out the waste products, and then returned, purified, back into his arm. But this was a process he found exhausting and draining. He could not hide the marks on his arms either, and soon both of them were covered in bandages from the wrist up. Painful sores began to appear on his body, and signs of general debility multiplied. However, the doctors were still encouraging about his prospects, and Andropov managed to keep up with his relentless workload. His son remembered that he still hoped he had several years left, to complete some of the reforms he had started.

The health of the senior leadership of the Soviet Union had been of concern for some time and was not just the subject of much speculation by Kremlinologists looking in from the outside and trying to follow the ups and downs. In March 1983, the elderly members of the Politburo discussed in secret their own concerns about the effects on themselves of pressure of work. It was proposed that the working day be limited to nine-to-five and that members attend fewer evening engagements and receptions. It was also proposed that all Politburo members over the age of sixty-five should be allowed the opportunity to work from home for one day a week and that ‘relaxation should take place on one’s day off’.  During the debate, the elderly and loyal Arvids Pelše declared that Andropov should strictly observe this regime, and went on record saying, ‘you must take care and look after yourself, Yuri Vladimirovich’.

Four weeks after he had left Moscow for the villa on the Black Sea, Andropov spoke out against the United States in an interview for Pravda, denouncing the ‘militaristic course’ of US policy. Two days after this interview appeared, on 30 September, Andropov went for a walk in a nearby park. He was only lightly dressed for the warm Crimean late summer. During the walk he became tired and sat down to take a rest  on a granite bench in the shade. While there he became thoroughly chilled and soon started to shiver uncontrollably. The surgeon who had accompanied Andropov to the Crimea, Dr Yevgeny Chazov, was the Health Minister, a member of the Soviet Central Committee and chief of the Kremlin Clinic. He examined Andropov and found ‘widespread inflammation, requiring surgical intervention’. A minor operation was carried out immediately and was a success, but Andropov’s body was so drained of strength that the post-operative wound would not heal. The Soviet leader had taken a sudden turn for the worse. Chazov later wrote, ‘His condition gradually worsened, his weakness increased, he again stopped trying to walk, but still the wound would not heal . . . Andropov began to realise that he was not going to get any better.’

Andropov spoke to his deputy Chernenko every day from his Crimean villa. He regularly conversed with Ustinov and Gromyko too. His protégé, Mikhail Gorbachev, telephoned Andropov on several occasions and after one call thought he seemed brighter. He hoped he was getting better. After his exhausting medical procedures in the morning, Andropov liked nothing more than to sit on the veranda of his villa overlooking the Black Sea, reading the mountain of literature that was sent to him daily. All the most important papers from the Politburo and the Central Committee were despatched to him. Often he would in return dictate papers or memoranda for the Politburo. His staff would find statistics for him or search out papers or background briefings. He was determined to continue working, still hoping that he could throw off the ill health that was plaguing him.

No one knows what went through Andropov’s mind during  the months of September and October 1983 as he contemplated the many problems facing the Soviet Union, but almost certainly his already paranoid  outlook was affected to some degree by the frustration and weakness he felt in himself and the failings of his own body. He was of course keenly aware of Operation RYaN and the indicators that the KGB were looking out for. Everything going on in Washington seemed to be pointing in the same direction. Firstly there were those vicious tirades unleashed by Secretary Shultz and the President himself after the shooting down of the Korean airliner. Although  Andropov feared that the Soviet air defenders had made a  huge blunder, he soon took up the military line that the airliner had been on some sort of CIA-sponsored intelligence mission, had made a rendezvous with the RC-135 military surveillance plane, and had for some reason continued on its course through Soviet airspace and across its sensitive Far Eastern defences. He began to wonder if the aggression expressed by Reagan to the American people was a warming-up exercise in some way preparing them for the justification of a pre-emptive nuclear strike against the USSR . For sure, Andropov would have repeatedly pondered this question. At the root of all the tensions in 1983 were Reagan’s claims   that the Soviet Union was an ‘evil empire’. Again, Andropov saw this as the President’s way of preparing Americans for a military strike. Then there was SDI and the American attempt to overthrow the policy of nuclear deterrence that had kept the peace for nearly forty years. Was the US trying to undermine decades of Soviet defence expenditure on building up a vast nuclear arsenal? And at the heart of all Soviet fears was the deployment of the Pershing II and Cruise Missiles, both of which were to be rolled out in Britain, West Germany and Italy in the final months of the year. Then, American missiles would be only six minutes’ flying time from the Kremlin. Would these missiles be picked up by the faltering Soviet early warning system that had only recently shown up its failings? And even if they were picked up as they approached their targets, would there be time to launch a retaliation? Perhaps the Americans were now calculating that they could entirely destroy the Soviet leadership before there was an opportunity to hit back. It was this fear of an attempt to decapitate the leadership with a limited nuclear attack on Moscow that most frightened the men of the Kremlin. Had Reagan convinced himself that he could fight and win a nuclear war by striking out of the blue? It would have been strange if these questions were not raised by the Kremlin leadership, and in Andropov’s fevered brain they could well have grown rapidly into alarming daytime fears and terrifying nightmares.

Note: For ease of reading, the footnotes have been removed from this section.