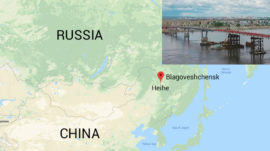 Footage from the bridge’s opening ceremony showed trucks crossing the bridge between the cities of Blagoveshchensk and Heihe as ice drifted underneath. Russia and China connected their sides of the bridge across the Amur River in May 2019, three years after signing the construction deal.

“This bridge opens up export opportunities for us,” Amur region governor Vasily Orlov was quoted as saying.

The Moscow Times has picked out five key facts about the two-lane highway bridge:

Preparatory work: 24 years. China and the Soviet Union first raised the prospect of connecting Blagoveshchensk and Heihe in 1988. In 1995, after the Soviet collapse, China and Russia signed a joint construction agreement and finally began construction in December 2016.

Load: 4 million metric tons of goods and 2 million Chinese tourists per year, as estimated by Russia’s minister for Far East and Arctic development.

Construction of the 2,200-meter bridge between the cities of Nizhneleninskoye and Tongjiang began in 2014 as Russia pivoted East amid deteriorating ties with the West.

The rail bridge is expected to serve as an international goods transportation channel with an annual shipment volume of 21 million tons.