Culture | 6 Things You Need to Know About OPEC+
RssMail 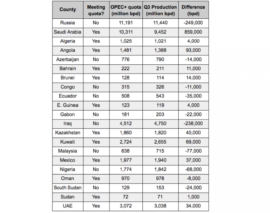 Energy ministers from two dozen of the world’s most important oil producing countries will descend on Vienna next week for a crucial OPEC+ meeting. Top of the agenda will be negotiations over whether to extend or deepen the oil cartel’s current level of production cuts, which are due to expire in March 2020.

OPEC+ is a group of 24 oil-producing nations, made up of the 14 members of the Organization of Petroleum Exporting Countries (OPEC), and 10 other non-OPEC members, including Russia.

The OPEC bloc is nominally led by Saudi Arabia, the group’s largest oil producer, while Russia is the biggest player among the non-OPEC countries.

The format was born in 2017 with a deal to coordinate oil production among the countries in a bid to stabilize prices. Since then, the group has reached deals for members to voluntarily cut and ramp-up production in response to changes in global oil prices.

OPEC accounts for around one-third of the world’s oil supply, with the non-OPEC members bringing the total share of global oil covered by the deal to just under half. The world’s largest energy producer, the U.S., is not part of the deal, nor is China or other leading Western producers such as the U.K., Canada and Norway.

What oil production cuts have OPEC and Russia agreed?

In the latest deal, the OPEC+ group committed to cutting oil production by 1.2 million barrels a day (bpd) — around 3% of members’ output — from a benchmark level set in October 2018. After an extension, that deal is scheduled to expire at the end of March 2020.

The two top producers — Saudi Arabia and Russia — agreed to bear the brunt of the cuts.

However, the two countries have diverged when it comes to meeting their quotas. Saudi Arabia, the deal’s main cheerleader, has cut production by more than 850,000 bpd alone — covering more than two-thirds of the 24-country target single-handedly. Even before the hit to supply following the attack on its largest oil facility in September, Riyadh had been an enthusiastic participant in the deal.

Russia, meanwhile, has been overproducing by 250,000 bpd in the third quarter. In fact, Russia has only met its OPEC+ monthly quota on three occasions this year, when its oil exports were hit due to contamination of the “Druzhba” pipeline.

Will OPEC+ extend its production cuts?

“Early indications suggest that OPEC+ producers may simply extend their current production deal,” said David Fyfe, chief economist at Argus Media, summarizing market sentiment that an extension beyond March 2020 will be announced at the meeting in Vienna on Dec. 5-6.

“It looks like it’s set up for them to roll this agreement over, maybe kick it up until June,” Helima Croft, global head of commodities strategy at RBC told U.S. outlet CNBC. Given the number of countries that have not been meeting their voluntary agreements, particularly Iraq and Russia, the Saudi oil minister may use the meeting to “put his foot on the neck of the errant producers and say: ‘get your act together,’” Croft said. “He doesn’t want Saudi Arabia to do more than anyone else.”

However, analysts are unconvinced whether extending the production cut deal will be enough to support oil prices throughout 2020. “Market fundamentals indicate that in fact, the group should be preparing further supply cuts if it wishes to support the oil price,” Fyfe said.

What does Russia want from OPEC+?

Russia’s position on a potential deal to extend the production cuts is officially “a secret,” energy minister Alexander Novak, who will be at the meeting, said Wednesday.

Reports suggest he will have two things on his agenda. First, pushing back against Saudi suggestions to cut production even further. Second, fiddling around with OPEC’s accounting rules for gas to enable Russia to actually increase its oil production under the terms of the current agreement.

At a meeting of energy industry representatives and Novak in Moscow this week, oil producers took a firmer stance, pushing back on the idea of even considering an extension to the current deal until next year.

“We remain in the deal with the same quotas. We will meet at the end of the first quarter to discuss. Those are our proposals,” Ravil Maganov of Russian oil giant Lukoil told reporters after a meeting of industry representatives and the Energy Ministry in Moscow.

Those comments give Novak cover to play hard-ball in the negotiations in Vienna against plans both to deepen cuts or agree to a lengthy extension, analysts said.

President Vladimir Putin has also drawn attention to the difference between Russia and Saudi Arabia’s positions recently, saying Riyadh was adopting a “tough” opening position in pushing for further cuts. He added: “We understand that the tough stance, including from our friends from Saudi Arabia, is linked to the Saudi Aramco IPO. Everybody understands this. It’s an open secret.”

In opposing Saudi wishes, sources said Russia will argue that it is dangerous to ramp-down production during winter, as production sites could be damaged due to extreme temperatures in the Siberian oil fields which account for two-thirds of Russia’s production.

What is the Future of OPEC+?

Beyond debates over a potential extension to the production cuts, OPEC politics are always fragile, and the markets will be paying a close eye to how robust the OPEC+ deal is and, in particular, the Russia-Saudi rapport.

“The Russian intentions will be a critical aspect of [OPEC+] for the future, especially with them wanting some wiggle room on [gas] condensate and to potentially produce more,” John Kilduff of Again Capital told CNBC news. “They’ll be in the deal in name only.”

Despite Russia’s reluctance to cut production so far, analysts highlight that Russia will stay committed to the OPEC+ format for wider geopolitical and commercial reasons.

“The financial benefits and the soft power strategic gains far outweigh the cost of shutting down several hundred thousand barrels,” said RBC’s Croft. “Russia has gained enormously in terms of new deals that have been signed with Saudi Arabia and the United Arab Emirates.

Those new deals include lucrative defense contracts, as Russia has stepped-up its role as chief diplomat and problem-solver in the Middle East following the U.S. withdrawal from Syria, while being able to maintain cordial relations with all the major powers in the region.