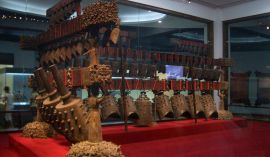 In the year 433 BCE, Marquis Yi of the state of Zeng was laid to rest in his four-room tomb along with his most prized possessions. These included 21 young women; bronze weapons, elaborate bronze vessels and fittings for chariots; and most famously, an enormous set of bronze bells arranged into a single musical instrument that likely required five people to play.

In his afterlife, the Marquis would have everything necessary to remain happy and comfortable and to prove that he was a man of substance—the bronze bells were perhaps the most important symbol.

Marquis Yi was buried when the Chinese Bronze Age was nearing its end. China as a centralized state did not yet exist. Most of China resembled Medieval Europe—a fragmented mixture of small states trading and warring with each other using metal weapons, whose people sometimes lived in small, fortified cities. The technological development that heralded the shift from Stone-Age technology in around 1,700 BCE was the creation of bronze—an alloy of copper and tin which is harder and more durable than either of those metals.

The contents of the tomb of Marquis Yi were mostly undisturbed in 1978 when it was discovered and scientists began to study it.

Tools and weapons were among the earliest bronze objects made in China. Bells also appeared near the beginning of the Bronze Age.

“The earliest bells seem to have been made for the collars of horses and dogs and other pets,” says Keith Wilson, curator of ancient Chinese art at the Smithsonian’s Freer and Sackler Galleries. “To try and find the critters, I think. There is also evidence of them as horse trappings. Like jingle bells.”

Wilson is the curator of the new Sackler exhibition “Resound: Ancient Bells of China,” which features more than 60 Bronze Age Chinese bells, some of which are being displayed to the public for the first time. It is the first exhibition at the museum ever to be dedicated solely to the subject. The collection reaches across the entire timeline of the era, and shows how bells evolved from trinkets into sophisticated musical instruments and important political symbols.

The exact provenance of the Sackler’s bells is unknown prior to the 1970s, but some of them are of the same type as those in the famous collection of Marquis Yi, which is held in the collections of the China’s Hubei Provincial Museum.

By the time Marquis Yi’s tomb was built, those simple “jingle bells” had spawned complex metallurgical and musical tradition. Chinese bellmakers gradually figured out how to make musical instruments that produced two different tones in the same bell, casting them with just the right oval—rather than circular—shape.

The two-tone bell “seems to have emerged through experimentation in the Western Zhou period, from 1050 to 771 BCE, an experimental phase of bellmaking,” says Wilson. “The bells of this period are very eccentric. Lots of shapes and proportions. Like they know something is there. . . how to meld music and metallurgy to make the sound that they want.”

Controlling the exact tone of a bell before it has even been cast is extremely difficult. Precise ratios of copper, tin and any other additives to the bronze have to be regulated. The dimensions of the mold have to be exact.

“The strongest piece of evidence that they understood this is that set of 65 bells that was found in the Marquis Yi of Zeng’s tomb,” Wilson says. “Not only does that collection show categorically that they are being used musically, but they have notations that name the tones the bell should make. Those inscriptions were cast into the bell itself, not added afterwards.”

During the middle Zhou period, displays of bronze bells and other bronze vessels were an indicator of wealth and political status. They were part of a ritualized form of court music that also included strings, percussion and wind instruments. Maintaining an orchestra on that scale required a lot of resources. Marquis Yi was only a minor ruler. Zeng was nominally an independent state but it was really under the control of a neighboring power. The bells and orchestras maintained by more powerful rulers may have been even more impressive.

The manufacture of cast bronze objects further advanced the innovation of an industrial-style division of labor begun in very early periods of Chinese history. In early Bronze Age foundries, one group of people in a workshop would make the molds, another group would do the casting, and yet another would handle the finishing.

“They didn’t have the need” before the Bronze Age, says Donna Strahan, head of the Freer|Sackler Department of Conservation and Scientific Research. “Enough wealth, enough people living together and a rich enough overlord to support this. They had to have resources to keep these kinds of large workshops running. Before that, they were probably smaller, and didn’t have the luxury to invent those kinds of techniques.”

The bells which will be exhibited at the Sackler should sound exactly the same today as they did thousands of years ago. In theory.

“We’re hearing an almost exact sound from 2,500 years ago. Bells are fixed pitch instruments,” Wilson says. “They aren’t like flutes where you can change the output. A bell is a bell is a bell unless you start chipping away at the metal.”

But the question of whether or not to try ringing the bells is a controversial one even within the Smithsonian. Some think that the risk is low and the benefits of recording the tones of the bells outweigh any small risk of damage. Others disagree. None of the Sackler’s bells have been struck since 1991. Some have never been rung in modern times and have never been recorded.

“They are surrounded by soil and water and you’ve got corrosion,” says Strahan. “So it is possible that if you struck that bell it would fall apart. . . knowing that it has been buried for two or three thousand years, and it’s green with corrosion, you know you’ve got an issue.”

Wilson disagrees. He thinks that it would be safe to ring the bells a few times and record them for posterity.

“It’s kind of ceased to be a bell. It’s just an artifact if you don’t strike it anymore,” Wilson says. “You would need to strike it more than once, however, because these are complicated objects. You don’t get the same acoustical reading in every strike. . .  even though you are playing the same bell and striking it ten times, each of those tones is slightly different.”

No antique bronze Chinese bells are known to have fallen apart as a result of being rung, but Strahan does not want one of the Sackler’s bells to become the first.

“Now [a Chinese research team was] very clever with Marquis Yi’s bells. . . and figured out the alloys exactly and made replicas. And that is what I think should be done to find out what they sounded like,” Strahan says.

In 1991, a team of specialists investigated the physical and acoustical properies of the Sackler’s bells and Wilson says their findings “contributed to a revised international understanding of ancient Chinese bells.” Though visitors will not get to hear the bells being rung live, recordings made in 1991 of the 12 tones of the museum’s six-bell set have been digitally analyzed and remastered to create an interactive exhibit. Using a touch screen, visitors can virtually ring the bells and create music with them.

Modern soundscapes using the bell tones will be heard in the exhibition created by composers Hugh Livingston, Norman Lowrey and Doug van Nort, who were commissioned to create five-minute compositions using the 1991 recordings.

It isn’t the same type of music that would have been played on Marquis Yi’s bells, but that would be impossible to reproduce. Nobody has any idea what the music of that era sounded like. Only lyrics of some of the ancient songs have survived. The court music of pre-imperial China disappeared shortly after the end of the Bronze Age as the Qin and subsequent Han dynasties unified a vast swath of East Asia to form the single, connnected empire that modern China is today.

“Why don’t bell orchestras exist today? It was court culture that restricted their appeal,” Wilson says. “As China became unified and there was a single court, that allowed a different musical culture to emerge. That was more easily influenced by foreign culture. The Buddhist culture [which probably arrived in China during the first century CE] strongly influenced Chinese popular practice. Folk music, both in China and among immigrants arriving over the Silk Road, altered and influenced the popular music that made this [court] music retreat into highly specialized and ritualized function.”

Modern Chinese ensembles perform traditional music on reproductions of Bronze Age bells and other instruments, but this isn’t what Marquis Yi would really have heard. It is akin to using Renaissance-era Italian instruments to play bluegrass.

But it is possible that some of the bells in the Sackler were actually never intended to be rung at all. Normally, only a small amount of lead would not be included in a bronze alloy intended for bellmaking because it deadens the sound. Some exceptions to that raise a question.

“There is a group of bells in the Sackler that do have a relatively large amount of lead,” says Strahan. “It’s cheaper. We’re thinking that maybe these bells were not made to be played but were just for the funeral ritual. Only meant for burial and not meant for playing. I’m not sure we are correct. . .  even today metallurgists that make bells, they will keep those separate from other types of casting in the foundry because they don’t want any lead to get into the composition.”

China is vast, and technological innovation happened at different rates in different areas. A few areas were already producing iron as early as 600 BCE. The Marquis Yi’s tomb contained tons of bronze but no iron. But even as the Iron Age gradually spread across China, it is hard to pinpoint the end of the Bronze Age. Unlike in most other parts of the world, bronze goods continued to be produced in large quantities even after people had learned to work with iron. It wasn’t until the second century CE that cast iron bells (made for temples) overtook bronze bells in popularity.

“It’s not just another bell tradition,” says Wilson. “We’re looking at a very early period of human civilization, and there aren’t that many cultures that achieved this at a similar historical point.”