A Sleek Portable Toilet and Other Design Solutions for Disaster Victims 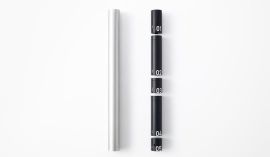 In January 2010, an earthquake devastated the Haitian capital of Port-au-Prince, killing more than 100,000. In October of that year, a cholera epidemic broke out. It would eventually kill some 10,000. The disease would ultimately be traced back to a UN peacekeeping camp, where poor sanitation allowed cholera bacteria to contaminate a nearby waterway. The epidemic continues to haunt the country, emerging after new disasters, like 2016’s Hurricane Matthew, and spreading thanks to lack of hygiene infrastructure.

Haiti’s cholera problems illustrate the importance of sanitation in the wake of natural disasters. But when you have hundreds or thousands of people living in tents or trailers or temporary huts in a field, how do you provide proper facilities?

A Japanese design studio called Nendo is attempting to help answer this question with their new portable toilet kit. Called the minimLET, it comes in a slim bag that can easily be slung over a shoulder or thrown in a trunk. Each bag contains the toilet itself – a lightweight seat and detachable aluminum pipes for legs – a nylon privacy tent, toilet paper, garbage bags for collecting waste, and a coagulant to solidify the waste.

The elements are designed to be multipurpose. The aluminum toilet legs can also be used to support the tent. The tent can also be used as a poncho. The inside of the toilet seat has compartments for small items. The carrier bag doubles as a water carrier.

And the toilet is also designed to work with found items and waste materials. The aluminum toilet legs can be switched with two-liter plastic bottles or three stacked beverage cans to support the seat. A cheap plastic umbrella can serve as a structural support for the tent.

The studio was inspired by two major recent Japanese earthquakes, the catastrophic 2011 earthquake and tsunami north of Tokyo that killed more than 15,000 and displaced hundreds of thousands, and the 2016 series of earthquakes in the southern island of Kyushu, which left the city of Kumamoto entirely without power.

“A major problem for people living in the evacuation shelters was not only that the transport network was paralyzed, food was in short supply and electricity, gas and water supply infrastructures were disrupted, but also that there was a lack of toilets,” says Nendo, in a statement.

Nendo plans to have the toilets on the market next year.

Professionally designed items like the minimLET have the potential to add a critical touch of comfort to people who suddenly find themselves in dire circumstances. Vienna-based designer Talia Radford remembers working on a project about sanitary issues in refugee camps and being struck by a picture of newly dug trench toilets. People were meant to simply stand out in the open to urinate and defecate in the hole.

“They didn’t think about privacy or anything like that, or any kind of cultural nuances that are needed to make these people feel accommodated,” she says.

Radford says the design community is increasingly interested in what they can do to support various relief efforts.

“A lot of disaster relief is based around military logistics,” she says. “That’s super-important, but it doesn’t necessarily create a humane product, or one that makes you feel like there’s real relief rather than that you’re just another number in a logistics exercise.”

A number of designers and architects have recently turned their hands to building better shelters. There are renderings, prototypes and built examples of almost every kind of shelter imaginable – inflatable, floating, made from scrap cardboard. There are origami-esque folding shelters that can be dispatched quickly to disaster zones or refugee camps. There are cheap, chic hexagonal shelters with solar panels, designed to do the same. There are accordion-like paper partitions to provide privacy in group shelters. Then there’s IKEA’s Better Shelter, a shed-like living space delivered in the furniture giant’s famous flat pack format.

Then there are design solutions to the problems of everyday life after a catastrophe. As the refugee crisis hit Europe, Dutch designers found a way to make backpacks for refugees out of the rafts they arrived on, to allow them to safely carry their belongings. Two years ago, Nendo came out with the MINIM + AID, a 5-centimeter-wide tube containing emergency preparedness items, including a raincoat, a whistle, a lantern and a radio that can be manually charged and also charge a smartphone via USB.

“The design makes it easy to keep it near the entrance and ready to go at all times,” Nendo said. “Just leave it in the umbrella stand or hang it from a coat hanger.”

It’s also stylish in the minimalist manner of an Apple product, with three color choices—black, white or silver. Just hope you never need it.