Ahead of Eastern Ukraine Peace Talks, Putin Is Sitting Pretty 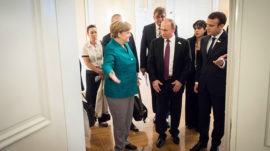 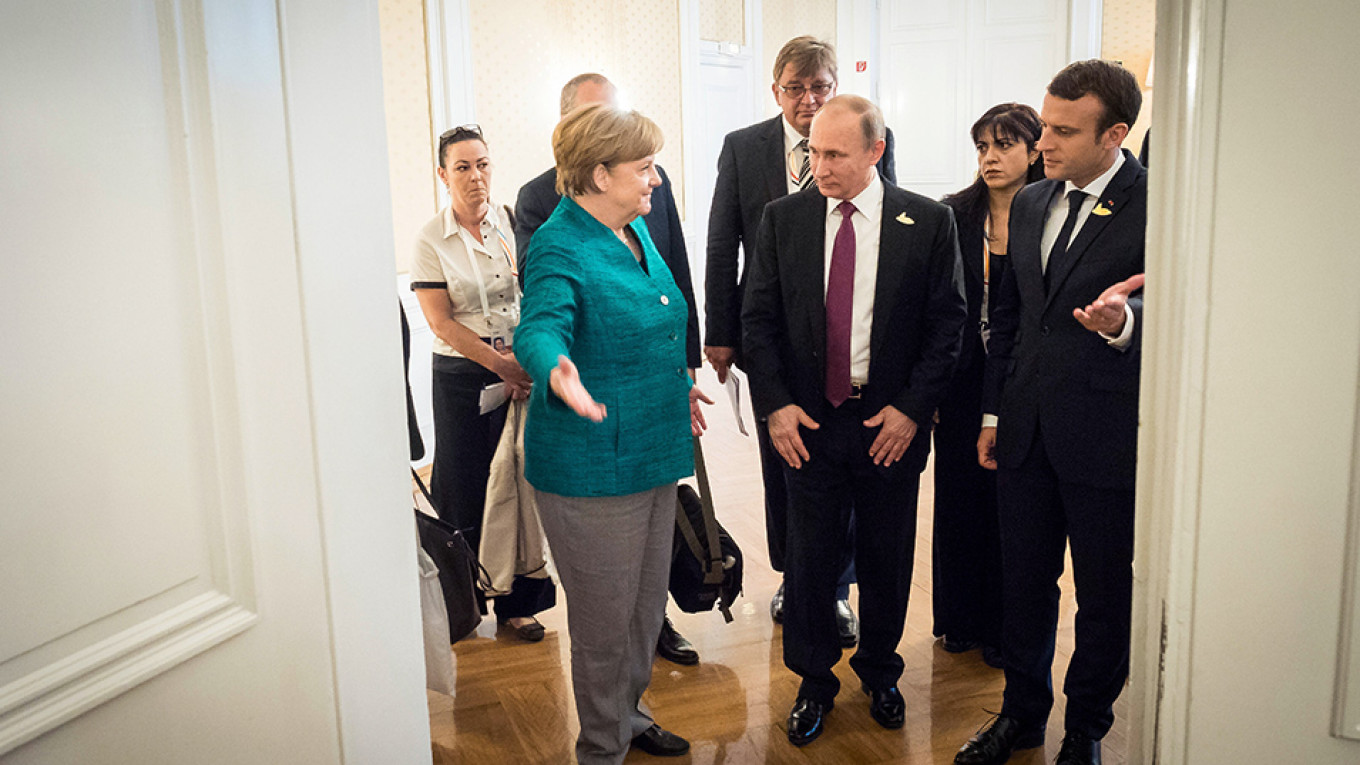 It has been more than three years since the leaders of Russia and Ukraine sat down with their counterparts in France and Germany to thrash out a deal aimed at finally bringing an end to the conflict between pro-Russian separatists and Kiev’s forces in eastern Ukraine.

On Monday, after repeated fits and starts, Russian President Vladimir Putin and his new counterpart Volodymyr Zelenskiy will head to Paris to hold talks at the Élysée Palace with German Chancellor Angela Merkela and French President Emmanuel Macron — mediators in the so-called Normandy-format summit.

Ahead of the talks, Zelenskiy, who has made ending the war that has taken more than 13,000 lives since it began in April 2014 a central promise of his fledgling presidency, has tempered hopes. In a lengthy interview with a clutch of international media outlets this week, he said that, in past talks, “people have come to these meetings intending for nothing to happen.”

If the Ukrainian leader is indeed seeking to adjust expectations ahead of the summit, it is for good reason, say Russian political analysts.

“All of the cards and trump cards are in Putin’s hands,” said Vladimir Frolov, a Russian foreign affairs analyst.

In the wake of the 2014 Maidan revolution that removed Ukraine’s pro-Russian President Viktor Yanukovych from office, and Russia’s subsequent annexation of Crimea from Ukraine soon after, pro-Russian separatists began seizing territory in the Donbass region. Over the five-and-a-half year war, Ukraine has repeatedly accused Putin of sending military support to aid the breakaway republics of Donetsk and Lugansk, a claim which he has denied.

Overseen by France, Germany and the Organization for Security and Cooperation in Europe (OSCE), Putin and Zelenskiy’s predecessor Petro Poroshenko did, in 2015, sign a peace agreement in the Belarusian capital Minsk, but none of its recommendations have been fully implemented. While the pact has helped dampen the worst of the fighting, the conflict continues to simmer.

Several months after his inauguration, Zelenskiy breathed new life into the peace deal when in October of this year he signed the so-called Steinmeier Formula — viewed as a necessary step by Moscow for peace talks to recommence.

Proposed in 2016 by German President Frank-Walter Steinmeier when he was the nation’s foreign minister, the formula aims to break the Minsk Agreement impasse by laying out the sequence in which the 13 steps of the deal would be carried out.

Crucially, according to the formula, the separatist territories would hold elections under Ukrainian legislation and monitored by the OSCE before Kiev’s jurisdiction over its easternmost border with Russia would be restored. It is currently held by pro-Russian rebel groups, and Russia is alleged to have sent troops and weapons across the border.

Can Ukraine and Russia Make Things Work This Time?

Critics in Ukraine view a full implementation of the Minsk Agreement — which would give the breakaway republics a degree of autonomy — according to the sequence of the Steinmeier Formula as a capitulation to Moscow.

After Zelenskiy signed the proposal, a flurry of protests broke out in the Ukrainian capital and he has seen his approval ratings slip in recent weeks. But he has also stated that, despite signing the formula, he will hold firm in the peace talks over Kiev retaking control of the border before the elections take place.

That, however, is not something his Russian counterpart will be open to, said Andrei Kortunov, director general of the Russian International Affairs Council, a research organization set up by the Kremlin.

“Putin won’t back down from elections taking place before border control can be discussed,” he said.

One of the problems for Kiev, Russian analysts said, is that Poroshenko and Zelenskiy’s signatures on the documents that lay out a roadmap for ending the war leave little wiggle room.

“No one wants to let go of the keys just because Zelenskiy needs support,” said Alexei Chesnakov, a former Kremlin official who now consults the authorities on Ukraine policy.

Macron is ‘Ours’ — but Does Russia Need Him?

Analysts also said Zelenskiy has backed himself into a corner with his own promises.

“Zelenskiy himself gave Putin leverage by making a rigid commitment in his campaign that he would ‘end the war,’” said Frolov, the foreign affairs analyst. “You can stop the war, but only on Moscow’s conditions.”

Zelenskiy’s negotiating position has also been hampered by Ukraine’s allies, the analysts said.

Ahead of the talks in recent weeks, his French counterpart Macron has repeatedly stated that Europe needs to restore its relations with Russia. He has even called NATO, Russia’s number one enemy, brain dead.

“Macron likewise handed Putin leverage by stating too openly that he wants to improve relations with Russia at any price, and even partner with Moscow to ensure European security without U.S. support,” Frolov said. “So why should Putin cede ground?”

Then there is Merkel, who is supporting a natural gas deal with Russia through the Nord Stream 2 pipeline that Ukraine opposes, as Russian gas would bypass it to reach Europe. Russia and Ukraine’s 10-year transit deal expires at the end of this month and is expected to be discussed on the sidelines of the peace talks on Monday.

And then there is Donald Trump, who Zelenskiy in the recent interview pointed to as a key figure in solving the Ukraine crisis, but who has not sent clear signals that he backs Ukraine. In a move that set off the ongoing impeachment inquiry in Washington, the U.S. president this summer withheld military aid meant to help Kiev fight the pro-Russian rebels.

At the two-day NATO summit in the U.K. this week that marked the alliance’s 70th anniversary, the leaders failed to present a united front.

While the Kremlin may have a strong hand, it is not a unified one, said Kortunov. One prominent view is that Zelenskiy could present the best chance for ending the war — and that the two sides are in a window that could soon close if the Ukrainian president continues losing backing at home.

“According to this point of view, we need to cut a deal now even if we have to take extra compromises,” Kortunov said. “But the question for the Kremlin is also: what can Russia get in return?”

At a minimum, he said, discussions over ending the economic blockade of the Donbass and ensuring a real ceasefire can be expected to come out of Monday’s talks.

He also noted that further exchanges of prisoners, akin to the one that laid the groundwork for the Dec. 9 summit in September, when the two sides traded 35 prisoners each, are likely to take place.

Zelenskiy in the recent interview pointed to another prisoner exchange as a must, then the implementation of a real ceasefire before the questions of elections and border control can be broached. But even if the final points aren’t discussed on Monday, it doesn’t mean the talks will have failed, analysts said.

“If the results of this sitdown are that people stop being killed, then it will have to be looked at as a success,” Kortunov said. “A frozen conflict is better than a hot one.”