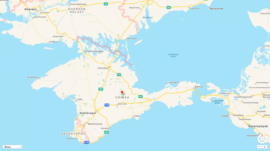 Ukraine said on Wednesday Apple did not “give a damn” about its pain, after the U.S. tech giant began referring to the Russian-annexed Crimean peninsula as part of Russia in its Maps and Weather apps for Russian users.

Russia and Ukraine have both been highly sensitive to the way global companies identify Crimea, since Russian troops seized the territory and Moscow annexed it after a referendum that Kiev and its Western allies say was illegal.

Apple appeared to have changed the way it displays locations in Crimea in its software, in a nod to Russian politicians who have demanded the peninsula be referred to as part of Russia.

Reuters reporters in Moscow who typed the name of the Crimean provincial capital Simferopol into Apple’s Maps and Weather apps on Wednesday saw it displayed as “Simferopol, Crimea, Russia.” Users elsewhere — including in Ukraine’s capital Kiev and in Crimea itself — see locations in Crimea displayed without specifying which country they belong to.

“Let me explain in your terms, Apple,” Ukraine’s foreign minister, Vadym Prystaiko, wrote on Twitter in English. “Imagine you’re crying out that your design and ideas, years of work and piece of your heart are stolen by your worst enemy, but then somebody ignorant doesn’t give a damn about your pain.

“That’s how it feels when you call Crimea a Russian land.”

Let me explain in your terms, @Apple. Imagine you’re crying out that your design & ideas, years of work & piece of your heart are stolen by your worst enemy but then smb ignorant doesn’t give a damn about your pain. That’s how it feels when you call #Crimea a 🇷🇺 land.

Apple’s Russia division did not immediately respond to a Reuters request for comment.

The EU and United States do not recognize Crimea as Russian and have imposed sanctions against the peninsula and individuals they accuse of violating Ukraine’s territorial integrity.

Russia‘s lower house of parliament, the State Duma, reported on Wednesday that the head of the committee on security and anti-corruption, Vasily Piskaryov, had held a meeting with an Apple representative.

According to a report on the State Duma website, Piskaryov said: “Apple has fulfilled its obligations and brought the programs on its devices in line with the requirements of Russian law.”