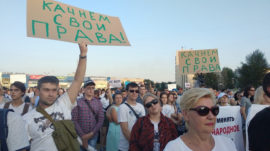 With wildfires raging across Siberia and Russia’s Far East, about 1,000 residents of the Siberian city of Krasnoyarsk on Thursday called for the resignation of the region’s governor, who said at the start of the crisis it wasn’t economically profitable to fight the blazes.

Wildfires have swept across a swath of Russia the size of Belgium. Greenpeace Russia has called them an “ecological catastrophe,” while Russia’s Emergencies Ministry said the forest fires had spread because of “insufficient measures to extinguish fires.”

Although officials have sprung to action in recent days, with Russian President Vladimir Putin ordering Russia’s army to help put out the fires, activists say that the way the authorities have handled the crisis is symptomatic of misplaced priorities.

“The forest fires were the boiling point that prompted the people to take to the streets,” Krasnoyarsk resident Ruslan Farmanov was cited by the Regnum news site as saying at the scene of the protests Thursday. 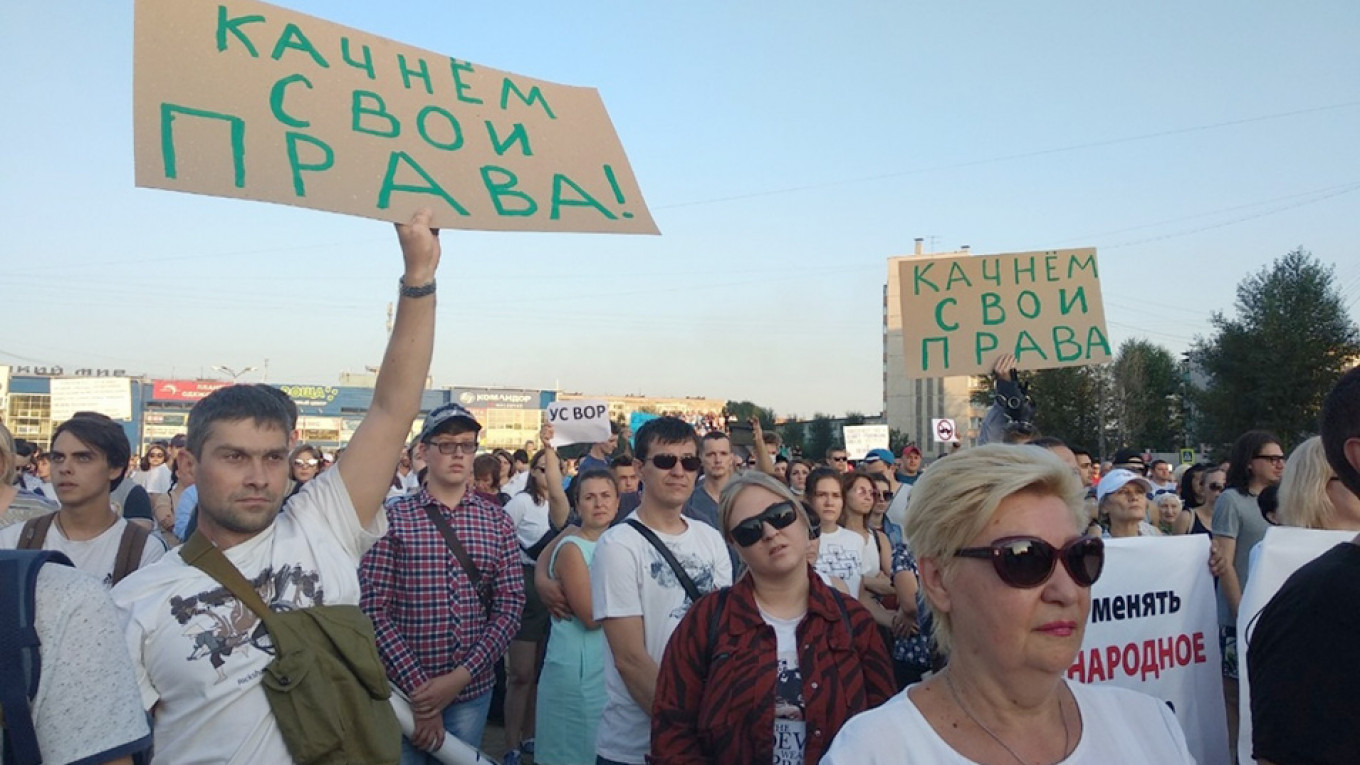 The demonstration was the latest in a rising tide of civil discontent across Russia over falling standards of living, which has seen a steep drop in ratings for Putin and the ruling United Russia Party.

Much of that dissatisfaction has been tied to ecological concerns. Last year, a poll by the Presidential Human Rights Council that found that the right which respondents felt was most violated by the authorities was their environmental safety.

Over the past year demonstrations have erupted across the country demanding officials solve a growing trash crisis, as landfills are overflowing and emitting toxic fumes.

Now activists are also protesting over how officials have handled the forest fires. They blame the authorities for reacting slowly and leaving several cities with populations over a million people blanketed in heavy smoke.

“Protests spread like a bacteria. You can put them out in one place, but they will pop up in another soon enough,” said Andrei Kolesnikov, the chair of the Russian Domestic Politics and Political Institutions Program at the Carnegie Moscow Center.

“And while not all of the protests going on, like those over garbage or fires seem to be political, they are all tied together because they are ultimately about human dignity,” he added.

In Krasnoyarsk, which has been particularly affected by this year’s forest fires, residents directed their anger over the situation toward the region’s United Russia governor Alexander Uss, who at a youth forum last month called fighting the fires “economically unprofitable.”

“This is a common natural phenomenon, which is meaningless to fight, and at times perhaps even harmful,” he said.

The protesters gathered Thursday evening with the approval of Krasnoyark’s City Hall carried signs reading “You have money for propaganda but not for forests” and “We’ll get our rights.”

More than 4,000 kilometers away in Moscow, where demonstrations have been ongoing for nearly three weeks over fair elections, several dozen protesters picketed outside the Natural Resources and Ecology Ministry. Activists held posters saying “Fight fires not the opposition” and “Those who love money more than forests are a foe to me.”

Asking not to be named because interviews have to be agreed with the ministry’s press service, one employee observing the picketers disputed the view that the authorities hadn’t acted correctly in comments to The Moscow Times.

“Teenagers smoke in the woods and drop matches there, so fires break out,” she said. “Our minister is there now, what else do they want?”

Russians Call for Stronger Action Against Siberian Wildfires on Instagram

Activists, however, said that Russian officials don’t begin problem-solving until they see a public outcry.

“They only begin moving once they see protesters on the streets,” said Leonid Kriger of the Socialist Alternative movement. “We saw the same with Ivan Golunov,” he added, referring to protests in Moscow last month that preceded the release of an investigative journalist jailed on what appeared to be fabricated drug charges.

Russian Prime Minister Dmitry Medvedev visited Krasnoyarsk on Wednesday and said local officials would have until November to determine if the fires were deliberately started to hide illegal logging activity.

But the picketers told The Moscow Times that looking for the direct cause of the fires ignores the larger concern of climate change.

“The authorities have been practically ignoring this issue,” said Yekaterina Zolotarevskaya, a 24-year-old environmental activist, who added that she and others planned to continue picketing Friday evening. “The hit to the environment from these fires is scary to even think about.”