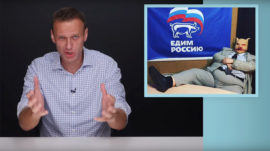 Ahead of Sunday’s nationwide regional elections, Russia’s most prominent opposition leader, Alexei Navalny, is urging voters dissatisfied with the status quo to ignore their ideological beliefs and focus solely on casting the ruling United Russia party out of power.

But in the Russian capital, voters heading to the polls to select deputies for the Moscow city council won’t be able to tell which candidates are backed by United Russia simply by looking at the ballot.

That’s because for the first time since the party’s formation in 2001, a year after Vladimir Putin was first elected president, United Russia hasn’t nominated a single candidate for the City Duma elections. Instead, United Russia’s candidates are presenting themselves as independent of any party.

“Today, all the actions and initiatives of United Russia have only one result: an increase in the protest mood in the country,” the pro-Kremlin Moskovsky Komsomolets tabloid wrote last month, calling the party “toxic.”

Over the past year, Russia has been gripped by a series of protests. They have sprouted from anger over issues ranging from a land swap between the North Caucasus republics of Ingushetia and Chechnya, to a new landfill in the northern region of Arkhangelsk, to plans to build a new church in the Urals city of Yekaterinburg.

But the protest mood first spiked just weeks after Putin’s re-election for a fourth term, after his government raised retirement ages last June. Already frustrated by endemic corruption and falling standards of living, Russians worried they wouldn’t even get to see already low pensions due to short life expectancy in the country.

While the pension overhaul sent Putin’s ratings tumbling, it was the ruling party that took the biggest hit.

“All official institutions have seen a drop in ratings, but United Russia was hit the hardest because the Kremlin placed all of the blame for pension reform on the party,” said political scientist Tatiana Stanovaya.

Because of those losses, Navalny sees these elections as an opportunity to call upon voters to participate in what he has dubbed “Smart Voting,” a strategic voting tactic he launched in November. His team has chosen candidates in 20 of the elections taking place nationwide with the best chances of beating United Russia candidates. On the eve of the election, voters who signed up to the Smart Voting website will be messaged the name of the candidate they should vote for.

Like Navalny, the authorities have also mobilized in response to last year’s elections. Their strategy: camouflaging United Russia’s candidates.

In Moscow, where the state-run VTsIOM pollster found in April that the party was polling at just 22 percent, all of its candidates are running as nominally independent. So too are six of the 16 United Russia governors running for re-election across the country.

In the Khabarovsk region in Russia’s Far East, United Russia candidates are trying a different tactic. They are running for city council under the banner of a new movement called “Time for Change” — though officially the candidates have been nominated by the party. In the Siberian region of Irkutsk, the respective movement has been dubbed “Our Irkutsk.”

In an interview, Lev Gudkov, the head of the independent Levada Center pollster, called the moves “fraudulent,” but added that they might work because “most people don’t know their local candidates.”

Because of the lack of recognition, voters cast their ballots for anyone but the ruling party in places where discontent is high, Gudkov said.

Ahead of this round of elections, the trouble became most apparent in Moscow, where anti-United Russia attitudes were running high and a clutch of strong opposition candidates had gathered steam. In June, for instance, a Levada poll had shown opposition politician Ilya Yashin winning his district by a landslide.

The authorities blocked opposition hopefuls from running. The Proekt investigative outlet reported this week that they believed they could lose their controlling grip on the 45-seat-City Duma.

Publicly, election officials ruled that Yashin, along with fellow Navalny allies Lyubov Sobol and Ivan Zhdanov and more than a dozen other candidates, didn’t collect enough valid signatures. The candidates rejected the move as politically motivated and rallied their supporters on July 14 in protest.

The rally wasn’t a one-off. Over the following weeks, Moscow saw the largest anti-government demonstrations since the 2011-2012 Bolotnaya protests against Putin’s rule. Last month, nearly 50,000 people turned out for a single rally.

The authorities, in turn, have clamped down hard on the opposition. Many of the movement’s leaders have spent extended periods behind bars this summer, while this week Moscow courts convicted four protesters to between two and three-and-a-half years in penal colonies for their roles in the rallies.

“It was almost a false start,” said political scientist Yekaterina Schulmann, noting that she had not expected the opposition and the authorities to come to such a stand-off until the 2021 elections for the State Duma, Russia’s lower house of parliament, which take place in less than 18 months.

How the Russian State Is Losing Its Instruments of Governance

With those national-level elections appearing on the horizon, Sunday’s results will provide an indicator of what to expect going into that vote, political analysts said. Already, the authorities are mulling whether to make structural changes to State Duma voting procedures to allow more United Russia members to run as nominally independent, analysts said, echoing a Bloomberg News report last month.

In the meantime, Navalny is focused on loosening Putin’s grasp on power on Sept. 8 through Smart Voting.

The strategy, however, has split the opposition. Dmitry Gudkov, one of the barred candidates and the last Kremlin critic to hold a seat in the State Duma, has spoken out against it. So too has exiled oligarch and founder of the pro-democracy Open Russia political movement Mikhail Khodorkovsky, among other prominent voices.

At the heart of the argument is whether to vote for the so-called systemic opposition parties like the Communist Party and the far-right Liberal Democratic Party of Russia, which the authorities use to allow voters to vent frustration, but which in effect do the authorities’ bidding.

But if Navalny manages to convince anti-government voters to take his strategy, Stanovaya believes it could be “dangerous” for the authorities.

“Navalny has understood the vulnerability of the regime and is attacking it head on,” she said. “For liberals, it’ll be a question of what price they are willing to pay.”