As Russians Went to the Polls to Extend Putin’s Rule, Yekaterinburg’s Hospitals Were Overflowing 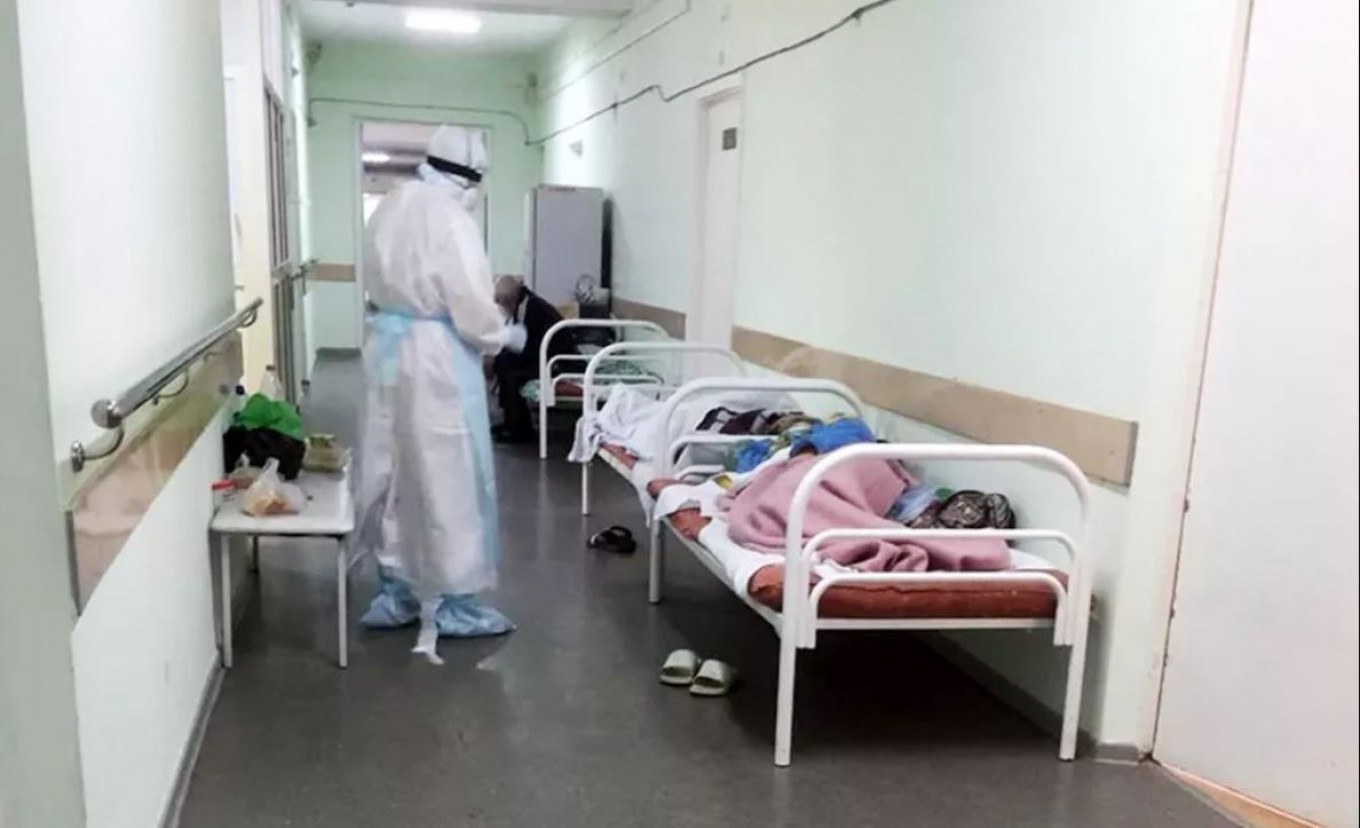 On June 26, the day after the start of a week-long vote on constitutional reforms that have since passed and will allow President Vladimir Putin to rule until 2036, Russia’s fourth largest city of Yekaterinburg lifted most of its coronavirus lockdown restrictions.

Over the previous week, the Sverdlovsk region, of which the city is the capital, had managed to stabilize daily new infections to the level Russia’s health watchdog Rospotrebnadzor deems acceptable for reopening. The watchdog advises using the effective transmission rate for the virus, also known as Rt, which is calculated by dividing the number of new infections over the past four days by those from the previous four days. If the result is 1 or lower, a lockdown is considered no longer necessary.

Although new cases in the Urals region had dropped to 180 by June 24, they were soon climbing again. By June 29, the Rt had shot up past 1. Nonetheless, that day the region’s governor Yevgeny Kuvyashev allowed summer bar and restaurant terraces to reopen in Yekaterinburg despite Rospotrebnadzor guidance saying that the Rt must be 0.8 or lower for that to happen.

“We will all be able to feel like we did in the time before the coronavirus,” he said.

At the same time, however, Kuvyashev extended self-isolation restrictions for residents 65 and over through July 6. That move proved wise. The next day, on June 30, Sverdlovsk recorded 276 cases — the fourth most that day nationwide — as the region’s Rt rose to 1.22.

But if that wasn’t enough to raise questions over whether Yekaterinburg should reinstitute lockdown restrictions, another of Rospotrebnadzor’s guidelines recommends that more than half of the region’s ICU beds should be free for coronavirus patients.

In Yekaterinburg, that appears to be far from the case.

“We don’t have any free beds,” a nurse at Central City Clinical Hospital no. 24, one of 18 hospitals in the Urals city treating coronavirus patients, told The Moscow Times this week. “Many patients are lying in the corridors.”

Putin Wants Russia to Get Back to Normal. New Outbreaks Show It May Be Too Early.

Interviews with three medical workers from two coronavirus hospitals in Yekaterinburg, as well as testimonies from medical professionals and patients published by regional media outlets, paint a picture of a healthcare system under increasingly severe strain. Not only has the city’s so-called first wave of the virus yet to subside, but in recent days it appears to be resurging.

On June 30, the penultimate day of voting on Russia’s constitutional reforms, the nurse at Central City Clinical Hospital no. 24 said that her wing of the hospital alone was treating 87 patients, while another 18 were lying on makeshift beds in hallways because there was no more room in wards. As soon as patients are released, she said, new ones take their place.

Central City Clinical Hospital no. 24 did not respond to a request for comment.

All three medical professionals who spoke with The Moscow Times asked for anonymity because their employers had prohibited them from speaking publicly on the subject.

The state of affairs the nurse at Central City Clinical Hospital no. 24 described tracked with the experience of one patient who told a local news outlet that she had spent eight days in one of the hospital’s corridors earlier in June.

In a sign of the gravity of Yekaterinburg’s battle against the coronavirus over the past week, on June 26 a local news agency reported that patients were having to find their own places in hospitals because the ambulance system was unable to keep up with demand. The next day, a coronavirus patient in Central City Clinical Hospital no. 24 counted a line of 20 ambulances outside the clinic as they waited to drop off patients.

Patients have also reported long lines for CT scans — Russia’s method of quickly determining whether a patient may be infected — while testing centers turn them away. On Thursday, local deputy Dmitry Ionin questioned whether health officials were undercounting infections following media reports that hospitals were ordered to scale back CT scans in private clinics to lower case numbers.

Coronavirus Is Just Getting Started in Some Russian Regions. Their WWII Parades Are Going Ahead.

The virus’s resurgence has not left the authorities themselves untouched. As votes were still being counted early Thursday, a local deputy suspected of having been infected with the virus died in a coronavirus ward.

“We are clearly facing more work now than in April and May,” the doctor added.

On Monday, city officials ordered another hospital to begin taking in patients.

For much of Russia’s pandemic, Moscow — the country’s largest city — has been the epicenter of the outbreak. But as its peak passed in mid-May, many other regions followed the capital’s lead in reopening. At the time, Putin urged the country to get back to work, while critics said the reason was to ensure a good mood ahead of the vote that would extend the president’s rule.

Yet the virus is only now beginning to surge in some regions. On Wednesday, the final day of voting on constitutional reforms, Russia saw a record daily death tally — excluding Moscow — with the city’s new infections representing just 9% of total cases nationwide. At its peak, Moscow accounted for as many as two-thirds of all cases on any given day.

But it’s not just that some places have been hit later. Others, including Yekaterinburg, don’t appear to have beaten back the virus at all before they began to reopen.

In the United States, where lockdown restrictions were similarly lifted in many states while caseloads were still high, the coronavirus has returned with a vengeance. The country’s experience could be a warning for Russia, which has mostly returned to regular life although new daily infections remain in the thousands.

On Friday, CNN published an analysis showing that the world’s four worst-hit countries — Brazil, India, the United States and Russia — all lifted their lockdowns relatively early.

‘A Political Decision’: Russia Declares Victory Over Coronavirus Even as Cases Rise

For Yekaterinburg, Los Angeles could prove to be a cautionary tale. After having stabilized infections for weeks, the city decided to restart its nightlife. A growing consensus shows that these types of venues are petri dishes for the virus, which spreads through the air in poorly ventilated places.

The weekend after bars and restaurants reopened, on June 20, city officials counted that some 500,000 people had visited bars and restaurants. Since, the city has seen a 40% increase in coronavirus cases among people between the ages of 18 and 40, who epidemiologists say are a group that spreads the virus — often without showing symptoms — to more vulnerable groups.

All three Yekaterinburg medical professionals told The Moscow Times they believed lockdown restrictions had been lifted too early.

“They ended quarantine early — very early,” said one of the doctors at City Clinical Hospital no. 14. “We’ll work as best we can. There’s no choice.”

Some medical workers, though, are hanging on by a thread.

“I feel like a zombie,” said the nurse at Central City Clinical Hospital no. 24. “The lifting of restrictions this early means this will never end.”