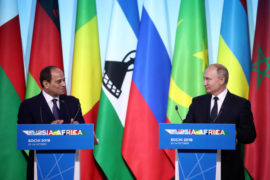 SOCHI — Last winter, the head of Ghana’s state news agency received a message: Russia’s ambassador to the West African country wanted the agency to discuss a partnership with TASS, its Russian counterpart.

For many years, Albert Kofi Owusu had thought negatively about Russia, a perception he attributes to the Western media and Hollywood films. But after the country hosted the FIFA World Cup last year, Owusu said his eyes were opened to how developed it was; how its people were like anyone in the West. So when the request came through from the ambassador, he didn’t think working with Russia would be all that bad.

The Russian offer also appealed for another reason: the collaboration with Russia’s state news agency would come with no strings attached.

“With Western aid, there are all these conditions,” Owusu explained. “They say: If you want this money, you have to do this about LGBTQ, for example — even if it goes against your country’s values. China and Russia say, ‘Here’s the money,’ and that’s it.”

It’s been months since those initial conversations with the Russian diplomat. This week, Owusu flew to the Black Sea resort town of Sochi to begin official negotiations with TASS during Russia’s first ever Africa summit. Representatives of all 54 African nations, including 43 heads of state also traveled north for the Russia-Africa Summit and Economic Forum, which was co-hosted by Russian President Vladimir Putin and Egyptian President Abdel Fattah el-Sisi.

Symbolically, the event was hosted in Sochi’s Olympic Village, where Putin first projected Russia’s renewed might on the world stage during the 2014 Winter Games. Within weeks, he would annex the neighboring peninsula of Crimea from Ukraine and back pro-Russian separatists in the country’s Donbass region.

Fast-forward to this week, where Putin ramped up Russia’s geopolitical realignment amid a U.S. retreat from the Middle East. On Tuesday, the day before the summit kicked off, African leaders began arriving by private plane and were greeted to a traditional ceremonious offering of bread and salt. Meanwhile Putin hosted Turkish President Recep Tayyip Erdogan to hash out a possible end to the conflict in northeast Syria. After six hours of talks, Russia cemented its role as arbiter not only in Syria, but in the greater Middle East.

Talks with Erdogan done, Putin turned his attention to Africa, an entire continent where trade and security is dominated by China, the Arabian Gulf states and Western countries. Currently, China, the U.S., Japan and the European Union dwarf Russian aid and investment in Africa: Russia’s current bilateral trade of $20 billion is just a tenth of China’s.

To set Russia apart from the pack, Putin is leaning on a unique pitch: that only Russian support can help protect the sovereignty of African countries.

“We see how an array of Western countries are resorting to pressure, intimidation and blackmail of sovereign African governments,” Putin told TASS on Monday in an interview ahead of the summit, adding that Russia was ready to provide help without “political or other conditions.”

“Our country played a significant role in the liberation of the continent, contributing to the struggle of the peoples of Africa against colonialism, racism and apartheid,” he said. Although ties deteriorated after the collapse of the Soviet Union in 1991, traces remain: the Mozambique flag, for instance, carries the Kalashnikov rifle.

Those themes were echoed throughout the two-day summit in Sochi. While Putin met with African leaders for negotiations, both Russian and African officials and businessmen spoke in an adjacent forum that ran the gamut of topics, from humanitarian cooperation to media relations to infrastructure development. In session after session, speakers emphasized partnership over aid, and sovereignty over fealty.

Throughout the summit, officials and business leaders could use the Russian tools which seek to hasten that new order. Outside of the event space, Russia’s defense export agency Rosoboronexport, the largest arms exporter to Africa, displayed armored humvees and a MiG-35P attack helicopter replete with rockets.

Inside, the agency manned a stand displaying Kalashnikov assault rifles and grenade launchers where officials and businessmen posed with the weapons between negotiations. Stands also displayed the latest in virtual reality tech: several of Putin’s bodyguards even dabbled in a VR hunting game on their break. One scored the best shooting accuracy of the day.

The sessions were packed with others close to Putin too. One speaker, the billionaire Konstantin Malofeev, had long been the major financier of the Kremlin’s drive to spread so-called “family values” abroad. Last year, Malofeev funded a gathering of the World Congress of Families, a U.S. and Russian-led coalition of right-wing Christians who oppose same-sex marriage and abortion. Now, he is being tasked with Putin’s turn to Africa.

“Regime change is promoted by the West to keep African countries scared and weak, so the West can influence them,” Malofeev said during one of several sessions with the word “sovereignty” in the title. “And we in Russia know what we’re talking about, because we’ve come a long way to win our economic sovereignty.”

Malofeev was speaking as chairman of the Moscow-based International Agency for Sovereign Development (IASD), which was set up this year. He said IASD would work to help African countries find “African solutions to African problems.” By the end of the conference on Thursday evening, IASD had signed on to advise the Democratic Republic of Congo, Guinea and Nigeria in efforts to attract $2.5 billion in funding through sovereign debt.

Russia hasn’t promoted sovereignty everywhere in the world — namely, along its own borders. Malofeev, for instance, is under U.S. and EU sanctions for his role in financing pro-Russian separatists in eastern Ukraine. As if to highlight his role in undermining sovereignty, Malofeev’s close friend and the first prime minister of Ukraine’s self-declared breakaway Donetsk People’s Republic, Alexander Borodai, sat among the audience during the session. The DPR broke away in a conflict fomented in the aftermath of Ukraine’s Maidan revolution, after its pro-Russian president vetoed a deal to join the European Union.

During a session titled “Technological Sovereignty and Security in a Digital World,” Ayanda Dlodlo, South Africa’s State Security Minister, stressed that she was interested in partnering with Russia precisely because it understands how to fight this century’s “hybrid wars.”

“As Vladimir Putin put it very well: Russia has not colonized my country,” she told the audience.

Ivan Loshkarev, a lecturer at the Moscow State Institute of International Relations (MGIMO), an elite university that trains Russian diplomats, said that aiming to promote a less unipolar world in strategic areas is a key foreign policy aim of the Kremlin.

“The task for Russian diplomacy right now is to make Russia a power center, but also countries like Nigeria, South Africa and Egypt,” he said. “Multiple power centers will help hasten the new world order that will soon exist, where there won’t be one main center of power like there was yesterday with the United States.”

Rosoboronexport also advertised surveillance technology. One promotional video depicted a city in chaos due to “terrorism and extremism,” said a voiceover. After cameras with facial-recognition technology were installed on the streets, the city was rendered pristine.

“Russia won a lot of respect in Africa for its role in Syria by showing that it would stick its neck out for other countries,” said Samuel Ramani, who researches Russia-Africa relations at the University of Oxford. “And these countries have started buying into its narratives about counter-terrorism and a strong state approach.”

For his part, Vidiye Tshipanda Tshimanga, a strategic advisor to the president of the Democratic Republic of Congo, said that what the country was looking for in signing a contract with a Russian data company called New Cloud Technologies at the forum was “independence.” The company says governments get to harbor collected data on their own soil, rather than in servers in the U.S., which the company says has monopolized the tech market.

Russia Can’t Compete With China in Africa. Not Yet.

How much financial and political clout Russia gets out of its push for influence is not yet clear. As Charles Robertson, global chief economist of Russian investment bank Renaissance Capital, noted, two-thirds of Russian exports are currently accounted for by Egypt and Algeria alone.

And while the Kremlin said $12.5 billion worth of deals were struck over the course of the two-day summit, they were mainly memorandums of understanding that may not result in any investment.

Some of what took place was largely symbolic. As the summit kicked off on Wednesday, Moscow flew two Tupolev Tu-160 nuclear bombers to South Africa. It’s the first time the aircraft has landed on African soil.

Before the summit ended on Thursday evening, with a closing gala featuring Russian Olympic figure skaters, Putin and Egypt’s Sisi agreed to continue the format every three years. They signed a joint declaration that agreed, among other things, to promote “a world order based on multilateralism and respect for national sovereignty,” said the Egyptian president.

Yet despite the lack of concrete measures for attendees like Owusu, the head of Ghana News Agency, Russia’s reboot of its relationship with Africa is important. Together, Owusu believes, they can continue changing their image on the world stage.

“What TASS is doing to change the narratives about its country is spectacular,” Owusu explained, noting its focus, as well as those of other state-run outfits like RT and Sputnik, on “positive stories.” He lamented a similarly negative Western narrative about Africa that he said is all “Ebola and civil war.”

“We have a saying in Ghana,” he continued, reciting a proverb which could equally apply to decades of complex U.S.-Russia relations. “Until the day that the lion will learn to tell his own story, the tale of the hunt will always favor the hunter.”

This story was produced in partnership with Coda Story.