AEM Technologies company (belongs to the Engineering Division of ROSATOM – Atomenergomash JSC) shipped a set of key equipment for the third unit of the Kudankulam NPP in India. Four steam generators assembled, which are the main element of the reactor unit and provide the transformation of nuclear energy produced by the reactor into power energy, were manufactured at the site of the Volgodonsk branch of Atommash.

The set of heat-exchange equipment has been transferred by a car carrier from the Atommash gate to the specialized wharf at the Tsimlyansk Reservoir. In accordance with the requirements of road safety, navigation around the city has been done out at night. Steam generators from the specialized wharf will reach by water St. Petersburg. From there, along with other equipment, it will travel around Europe and through the Suez Canal, reach by sea India, to the south of Tamiland. The length of the route will be 21,000 km. 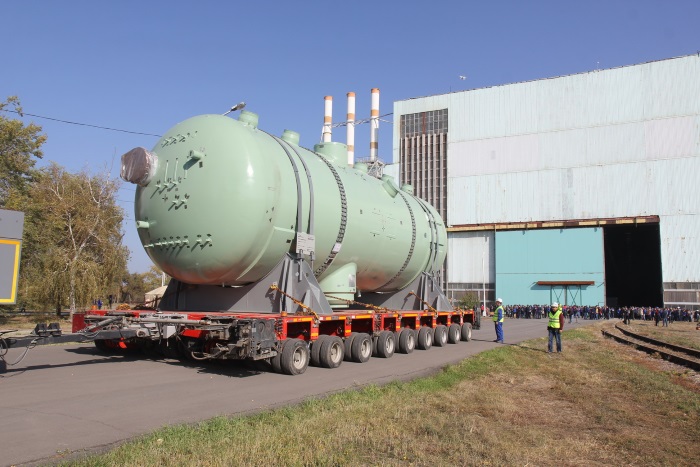 “This is the first shipment to a non-CIS country in the new history of Atommash,” noted Rovshan Abbasov, Branch Director. – It can be said that a large series of shipments of our equipment outside the post-Soviet space begins with India. Today reactors and steam generators for Turkey and Bangladesh are located at various stages of production in the plant workshops. Contracts for equipment production for nuclear power plants in Egypt, Finland, and Hungary have been signed. By 2021, we should significantly increase the production of equipment.”

The working cycle of production manufacturing the PGV-1000M steam generator from the commencement of production of semifinished metallurgical products to shipment takes about two years. 340 kg of coating tape, 5.5 tons of welding electrodes and 8 tons of welding wire are used to manufacture one item. Nearly 11 thousand heat-exchange tubes with a total length of about 130 kilometers are internally welded to the steam generator. In this case, the total length of welds is more than one kilometer.

At each stage, the key priority is being given to the quality of manufacturing and safety during the subsequent operation. The overall quality plan has 104 test points, including with the participation of the customer representative and authorized entities. For effective cooperation in the production of equipment for the Kudankulam NPP, a permanent presence of Indian experts was organized at the Atommash site.

Currently, work is continuing on the next set of equipment for India. In the production of Atommash, 4 steam generators for unit No. 4 of the Kudankulam NPP remain.

JSC Atomenergomash is the supplier of key equipment for the Kudankulam NPP. In particular, as for the third and fourth blocks of the plant, the company’s enterprises produce steam generators, primary coolant pumps, pressure variators, main coolant pipelines, moisture separators-reheaters, high-pressure preheaters, pipe fitting, secondary pumps and other equipment of the nuclear island and turbine hall.