The Atommash plant (part of the machine-engineering division of ROSATOM – “Atomenergomash”) manufactured and shipped the Reactor Pressure Vessel for the first power unit of the “Akkuyu” nuclear power plant under construction. 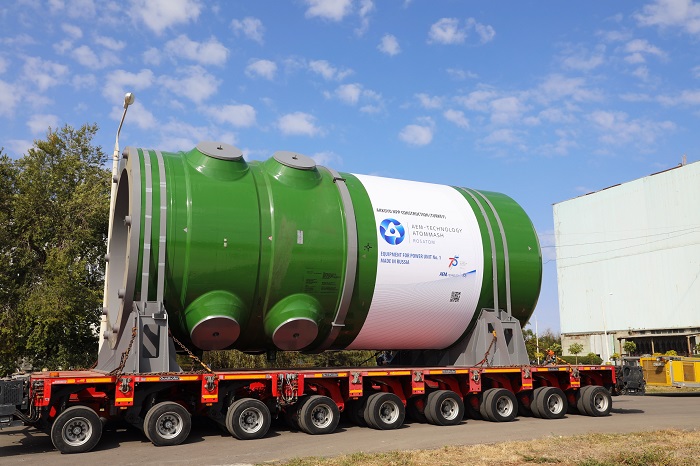 It took almost three years to manufacture the 330-ton Reactor pressure Vessel 12 meters long. A month earlier, four Steam Generators left the plant for the construction site of the “Akkuyu” NPP – the first nuclear power plant in Turkey. Thus, to date, the company has shipped all the most important large-sized equipment of the primary circuit of the reactor for the “Akkuyu” Unit No. 1. In total, the NPP project in Turkey includes four power units with Russian reactors of the VVER-1200 type of generation 3+. The capacity of each power unit will be 1200 MW. The “Akkuyu” NPP is the first project in the global nuclear industry, implemented according to the Build-Own-Operate model.

In addition to the Reactor Pressure Vessel for the “Akkuyu” NPP, two Steam Generators for the “Rooppur” NPP, the first NPP in Bangladesh, were also shipped that day. At the plant, three items with a total weight of over 1000 tons will be loaded onto road transporters and delivered to a specialized port-terminal of the Tsimlyansk reservoir. Due to its dimensions, the shipment of equipment from Atommash is a unique operation: trolleybus wires were temporarily dismantled along the entire route to transport multi-ton equipment to the port-terminal of the Tsimlyansk reservoir in Volgodonsk. The equipment will be shipped to the Customer’s site by sea: the route to the “Akkuyu” NPP will be 3 thousand km, to the “Rooppur” NPP – 14 thousand km.

Andrey Nikipelov, Director General of JSC “Atomenergomash”, noted: “We are on the eve of a big bright holiday – the Day of the Nuclear Industry Worker – the 75th anniversary of our industry. It used to be customary to celebrate professional holidays with some important “shock” achievement. 2020 turned out to be a shock year for us along its entire length: in our plans for this year we have the task of shipping 3 Reactor Pressure Vessels and 17 Steam Generators – this is a record performance indicator of even the most successful Soviet years for the nuclear industry. “

In honor of the upcoming professional holiday, Andrei Nikipelov also announced the creation of a new tradition in the division: the transfer of a symbolic gift from the teams of machine-engineering builders to the teams of nuclear power plants: and safe operation of nuclear power plants of Russian design. Therefore, I would like to transfer to the “Akkuyu” NPP under construction in Turkey a symbolic “baton” – gloves in which our welders do magic things with their own hands, turning multi-ton iron blanks into reliable and durable equipment! “

Manufacture of the Reactor Facility is a unique high-tech professional skill that only a few countries in the world possess. JSC “AEM-technology”, which is a part of the machine-engineering division of ROSATOM, is the only company in Russia that manufactures a complete set of nuclear steam generating facilities (NPPU) for NPPs. The production facilities of the Atommash plant allow manufacturing up to four sets of equipment per year.