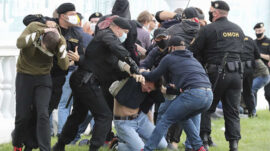 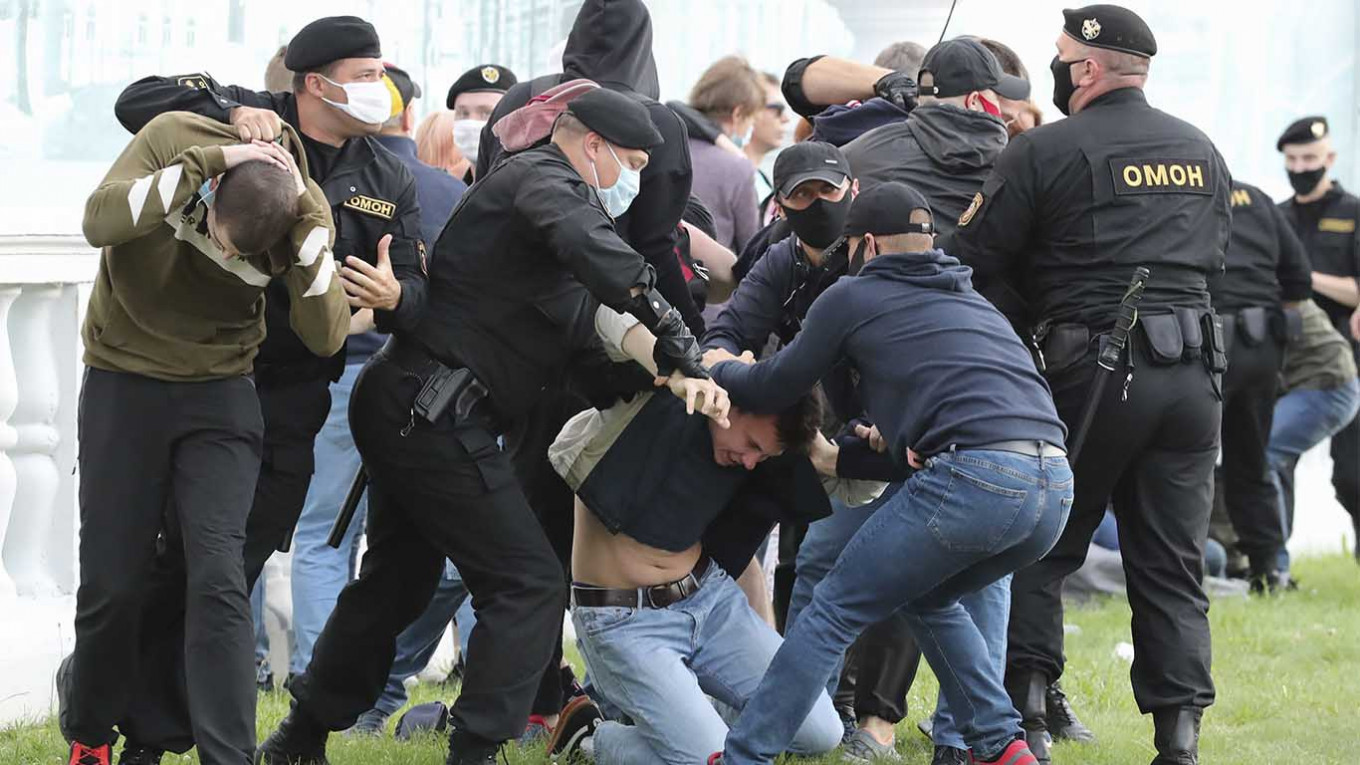 The surprise announcement is the latest twist in an extraordinary election campaign that has seen strongman leader Alexander Lukashenko jail his key would-be rivals ahead of the vote.

The Wagner Group, a U.S.-sanctioned outfit with links to the Kremlin through catering magnate Yevgeny Prigozhin, has been reported to be fighting in Syria, eastern Ukraine and other conflict-torn countries on behalf of the Russian government.

“Information was received about the arrival of more than 200 militants in Belarussian territory to destabilize the situation during the election campaign,” Belta wrote, citing law enforcement agencies.

The state news agency did not explain where the remaining suspected militants were.

Video of the arrest of the alleged Russian Wagner private military contractors near Minsk by the Belarusian KGB’s Alfa group. 5/https://t.co/UpMtWTY0F1 pic.twitter.com/QiHFjZ9jO6

The men’s behavior was “uncharacteristic for Russian tourists” because they didn’t drink and their “uniform military-style clothing” drew attention, the news agency said.

Forces from the Belarus KGB and the Minsk special police detained 32 people in Minsk overnight. A 33rd person was detained in the south of the country, Belta reported.

Lukashenko demanded an explanation from Moscow at an emergency government meeting following the report’s publication.

Moscow did not release an immediate comment. The Russian Embassy in Minsk said Belarussian law enforcement hasn’t informed them of the detentions.

Russian author Zakhar Prilepin said “two or three” of the detained Russians had served in his former battalion in the conflict in eastern Ukraine.

National television showed several Russian passports that allegedly belong to the detained men, as well as stacks of dollar bills, packets of condoms and pieces of paper with Arabic script.

Belarussian television also broadcast footage of a group of men who it said arrived in the country on July 25 and a raid on the premises where they were staying.

Some of the men were shown lying face down wearing just their underwear.

The alleged mercenaries may have been on their way to Sudan, the U.S.-funded Svoboda.org news website reported, citing video footage that showed Sudanese currency and a telephone card depicting the Khatmiya Mosque in Kassala among the detained men’s belongings. Previous news reports have said the Wagner Group is active in Sudan.

Protests have swept across Belarus in the lead-up to its Aug. 9 presidential election in which incumbent President Lukashenko is seeking his sixth term. Protesters first took to the streets after Lukashenko’s main rivals were jailed or barred from running and have since rallied behind the wife of a jailed opposition candidate.

Authorities in Belarus have cracked down on the opposition and detained more than 250 people at protests this month.

Lukashenko has previously accused foreign powers of seeking to destabilize Belarus and organize a popular uprising in the run-up to the vote. Last week he threatened to deport foreign journalists who he accused of stirring up protests against him.

Lukashenko has been in power since 1994. The Organization for Security and Cooperation in Europe, an international election and war monitor, has not recognized any polls in Belarus as free and fair since 1995.

Russia Vows ‘Promising’ Virus Vaccines in SeptemberKrasnodar: Come for the Sea, Stay for the Champagne