Board of Directors reviews progress of major investment projects 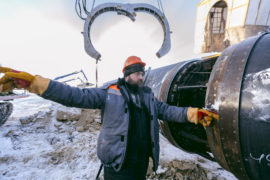 The Gazprom Board of Directors expressed its approval the Company’s ongoing work on its major investment projects.

One the Company’s current priorities is the Eastern Gas Program.

Gazprom is gearing up for the launch of pipeline gas supplies to China that is scheduled for December 1, 2019. The work on the Power of Siberia pipeline is ahead of schedule. At present, the construction of the pipeline between Yakutia and the Russian-Chinese border is mostly complete. Construction and assembly works are well under way at the Atamanskaya compressor station near the border. A total of 143 gas production wells have been drilled at the Chayandinskoye field, the key field in the Yakutia gas production center. The construction of production and power facilities, and transport infrastructure at the field is also in progress. In 2019, Gazprom plans to start pre-development of the Kovyktinskoye field in the Irkutsk gas production center for full-scale production.

At the Amur Gas Processing Plant, a key link in the process chain of gas supplies to China, large-scale equipment is being installed for the first start-up complex.

Construction machinery and staff are being mobilized, and large-diameter pipes are being delivered as part of the expansion of the Sakhalin – Khabarovsk – Vladivostok gas pipeline section between Komsomolsk-on-Amur and Khabarovsk.

Extensive work is being carried out to develop Russia’s Unified Gas Supply System.

A new booster compressor station and new wells are soon to be brought onstream at the Bovanenkovskoye field of the Yamal gas production center, which is going to be the main production site for the domestic gas industry. In 2019, Gazprom is starting full-scale pre-development of another very important field in the Yamal Peninsula, the Kharasaveyskoye field.

To transport the growing volumes of gas from Yamal and deliver it to Russian and European consumers, Gazprom is expanding its cutting-edge northern gas transmission corridor. Compressor facilities required for this purpose are being constructed at the Bovanenkovo – Ukhta 2 and Ukhta – Torzhok 2 gas pipelines. The development of gas transmission infrastructure in Russian northwestern regions is underway, and includes the creation of the Slavyanskaya CS, the starting point of gas supplies along the Nord Stream 2 gas pipeline.

The construction of the offshore section of the Nord Stream 2 is coming along as scheduled. Pipelay works are currently underway in the Swedish Exclusive Economic Zone.

The TurkStream’s offshore section has been installed ahead of the deadline. A receiving terminal in Turkey is now being constructed.

An LNG production, storage and shipment complex near the Portovaya compressor station is now under construction. The project aims, among other things, to provide gas supplies to the Kaliningrad Region, where an offshore gas receiving terminal and the Marshal Vasilevsky floating storage and regasification unit were brought into operation in January 2019.

The Management Committee was instructed to continue their work implementing major investment projects.