Celebrate Thanksgiving with an Uzbek Chicken 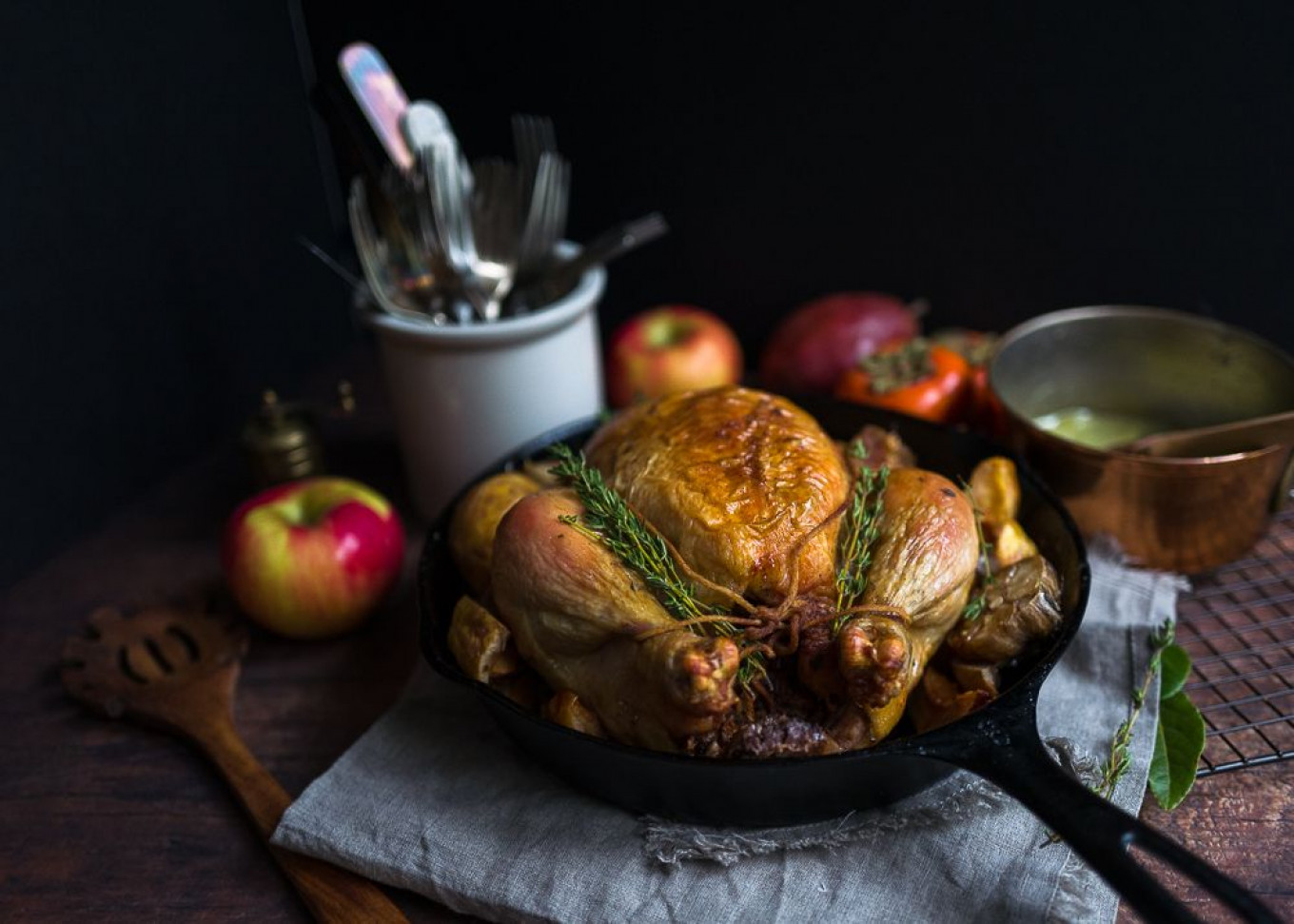 During my years in Moscow, I’ve experienced every kind of Thanksgiving from an ostentatious luncheon for 30 in the late 1990s at a palatial flat in the House on the Embankment to the nadir of the bleak, almost Dickensian Thursday night, when my daughter and I sat down to a plate of chicken nuggets and a bottle of ketchup, our macabre mood only dispelled by the unexpected arrival of a friend with a pumpkin pie from Correa’s restaurant and all the holiday spirit we lacked.

For many expatriates, a Moscow Thanksgiving may well represent the first time she (or he) tackles this Iron Man of culinary challenges. You can always tell the first timers as they move through a set progression of emotions similar to the five stages of grief and loss.

Stage 1: Denial. It’s mid-November; it’s cold and dark in Moscow. You realize to your horror that if you attempt to replicate the holiday (which more than any other puts food front and center) in Moscow, you must do it without an expansive North American grocery store aisle filled with everything from tiny bottles of Liquid Smoke to jumbo-sized packets of gluten-free stuffing, and without the sage (see what I did there?) advice of Mom, Aunt Mabel, or the Butterball hotline.

This growing realization morphs quickly into Stage 2: Anger. Not only are you going to miss the touch football, the pie lineup, and the hot turkey sandwiches, you realize you are going to have to pull off this entire Thanksgiving thing on your own.  And by “your own” I refer to the trailing spouse, because the working spouse will invariably be on some business trip or other.

But you can’t stay angry forever; on to Stage 3: Bargaining. You make elaborate deals with the devil as you crawl through grid-locked traffic from one overpriced supermarket to the next, in search of impossible-to-find items. “If I can find the one tin of cranberry sauce in Moscow,” you think to yourself, “everything will be fine.” Just one single, solitary tin of Ocean Spray — the kind that wiggles and jiggles and still has ridges of the tin when you bring it to the table — for which there is absolutely no substitute. If you can find that, you bargain, you’ll make the stuffing from scratch, and the pumpkin pie filling.  Surely, they can’t be too hard?

Whatever the outcome of your bargaining, it propels you right into Stage 4: Depression, often brought on from sheer physical exhaustion as your big day approaches. Stuffing from scratch and homemade pumpkin pie filling turn out to be much, much harder than you imagined. Internet research makes it even more so:  stuffing, it seems, can blow up inside the turkey, or poison people. Or both.

But finally, comes Stage 5:  Acceptance. Okay, your expatriate Thanksgiving does not look like a Norman Rockwell painting, and the Russians you invite don’t get it, but you showed up and imprinted this unique tradition on your own nuclear family. You trussed a turkey, made gravy and mashed potatoes, and if the pies were a little lopsided, no one said anything.  And, hey!  You didn’t poison anyone!

As the years slipped by, I tried to dispense wisdom (and the telephone number of my poultry guy Igor from Leningradsky Market) to the newly arrived and the overly ambitious, whether they wanted it or not. “Don’t try to replicate your family’s menu down to the last miniature marshmallow,” I advised one young hopeful, “because unless you brought those marshmallows with you, you won’t find them here.”

“There’s no earthly reason to have it on Thursday,” I cautioned an exhausted mother of three kids under the age of nine out at Rosinka, “it’s a school night, for one, and the traffic out of the city is a nightmare around dinner time on a weeknight.  Have it on Saturday or Sunday.”

“We delegate or die,” I said to my Thanksgiving co-host, three days before the holiday. Sixteen of us sat down to a luncheon, which combined the traditional with the improvised: two wild turkeys from Igor that would have been firmly rejected by the Butterball people but were delicious; an entire vat of the best mashed potatoes anyone had ever sampled. One guest had remembered the marshmallows and brought her mom’s yam and marshmallow casserole. Someone else brought their Aunt Ada’s string bean and dried onion dish. But we started the evening with fresh caviar from Astrakhan, because someone had that, and we used tkemali — Georgian plum sauce — instead of cranberry sauce (fantastic; try it!). There was no stuffing and absolutely no one minded. We ate and drank and then we sang Christmas carols and all the Russians around the table thought we were crazy. A memorable feast!

This year is going to be different, no matter where you are. My advice is: If ever there was a year to embrace minimalism, this is it. Have one pie instead of four (pick the one that sparks joy); keep the sides simple — or skip them. And if a turkey seems far too large for your smaller group, try the recipe below for Uzbek chicken, stuffed with quince and lamb, based on a recipe for Tovuk Bulama I found a long time ago in Lynn Visson’s authoritative “The Art of Uzbek Cooking.” The lamb and quince mixture infuses the chicken with rich flavor notes and elevates it from Sunday night comfort food to festive once-a-year holiday fare. I add a ton of fresh herbs and a generous amount of garlic and roast the chicken with more cut up quince or apples, which creates savory drippings just crying out to be made into a rich and flavorful gravy. Often, I make more stuffing than I need and roast little patties alongside the chicken.

It may be hard to come up with a long list of things to be grateful for this year. So be kind to yourself this year.  Roast a chicken.  And enjoy.

Recipe adapted from Lynn Visson’s “The Art of Uzbek Cuisine”

*If you don’t have a cast-iron skillet, any roasting dish will do, but don’t preheat it in the oven.