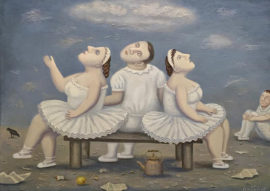 In 1991, Lyubarov left his hometown of Moscow in favor of a simple life in the village of Perelimovo. Ever since, the children’s-book-illustrator-turned-painter, notorious for his quirky sense of humor and his graphic, primitive style, has dedicated his career to painting series depicting the antics of his fellow villagers, known as “Peremilovans.”

A city boy takes to the country

Vladimir Lyubarov was born on September 4, 1944 in Moscow, in the historic Zamoskvorechye district. His interest in art developed at a young age: in his youth, he enjoyed drawing battle scenes of the Soviets defeating the Nazis. From 1969—1990, Lyubarov worked as a book illustrator, a common career path for artists: Soviet authorities rarely censored children’s books, which gave artists more creative freedom. Over these thirty years, Lyubarov illustrated over a hundred books by world famous authors including Voltaire, Jules Verne, Edgar Allen Poe, and Sholem Aleichem.

Then, in 1991, Lyubarov and his wife decided to leave Moscow and relocate to the village of Peremilovo—located at the edge of the Vladimir Oblast—to try their hands at provincial life. It was here that Lyubarov transitioned from illustration to full time painting, inspired by the people of Peremilovo and the unhurried pace of rural life.

But the characters in Lyubarov’s paintings are not just united by place, but also by Lyubarov’s whimsical, illustrative style. The Peremilovans all share similar facial features—wide-set eyes, angular noses, large, round heads—and can often be seen engaging in magical, seemingly impossible tasks: carrying small mermaids, conversing atop pumpkins as big as houses, flying above the village of Peremilovo. This style has been hailed as a contemporary version of the Russian lubok, a type of print popular in the 17th and 18th centuries known for its simple graphics and depiction of narratives from literature and folktales.

“I spend most of the year in a half-empty village where there’s no internet or cellular connection,” Lyubarov says. “Aside from me and my wife, there are very few people around. And so how, you might ask, did a theater begin here? The thing is, in my village of Peremilovo we’ve got a little of everything: a little bit of reality, a little bit of fantasy. And my characters, who are based on actual villagers, have been a little bit altered by my imagination. But then again, I can’t say I’m the master of my characters. They’re a bit fickle. All of a sudden they stop drinking and start exercising, so I have to draw a fitness series. And then they forget about sports and start eating with a burning passion—so I have to draw the series “The Eaters.” And now, like the rest of the country, my characters are putting on plays, one after the other, so quickly that I can’t keep up with them…” 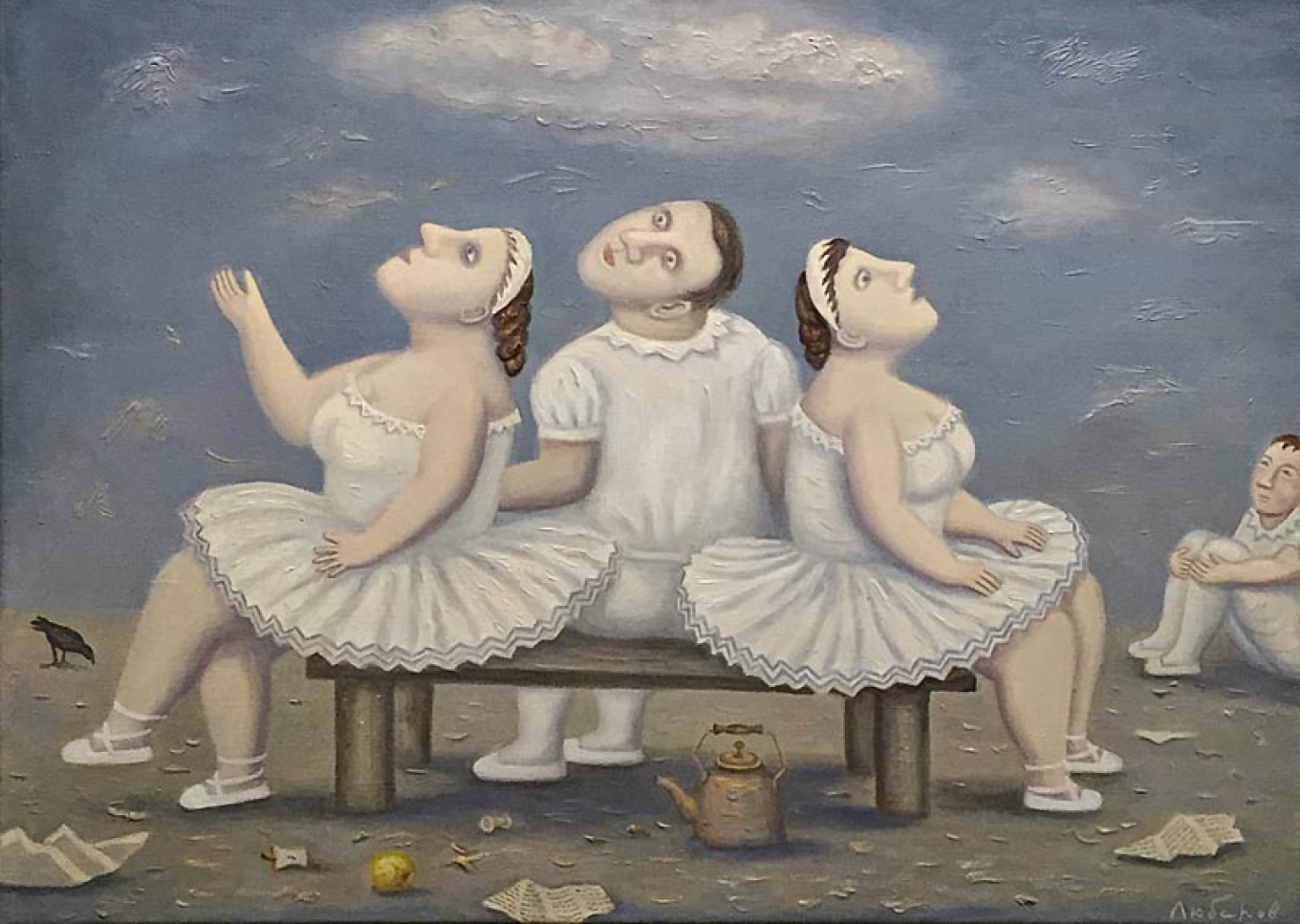 What are the Peremilovans up to now? Naturally, like the rest of the country, they’ve been swept up by theater fever—and have been actively putting on productions of classic plays with a little Peremilovan flair, all of which are displayed at Lyubarov’s current exhibition.

In “The Year of Theater in Peremilovo” exhibition, characters in the paintings lining the walls of the former home of dramatist A.N. Ostrovsky—which now functions as one of the branches of the State Theater Museum. The exhibition spans two floors: the first room, on the ground floor, features still lifes of classic Peremolivan cuisine, as well as a TV showing a loop of short documentaries on Lyubarov and an animated film based on his work. The three rooms of the second floor are mostly dedicated to paintings of the Peremilovans performing classic plays in their local theater such as Shakespeare’s “Othello,” Chekhov’s “Three Sisters,” and Pushkin’s “Yevgeny Onegin.”

However, the plays often diverge from the original versions. In his self-published spoof newspaper entitled “News From Peremilovo,” Lyubarov writes that one of the special features of the Peremilovan theater is the “lack of a ‘fourth wall’ between the actors and the audience. Often, if the audience sympathizes with the play’s main characters, they will provide lively commentary and sometimes even demand that the ending be changed to a more optimistic one. For example, after much insistence by the audience, Onegin and Lensky manage to make up during the famous duel scene in “Yevgeny Onegin,” and Chekhov’s three sisters are overjoyed that they never end up moving to Moscow and continue to live in the provinces.

Walking through the cozy, bright rooms of Ostrovsky’s home, it’s clear that Lyubarov loves these characters—a reflection of his love for the people and the nature of the Russian countryside, with all of its complications, humor, and mystery. In “Butterflies,” (2018), a group of disproportionately huge Peremilovans, who tower over the villages’ houses, raise their hands skyward in an attempt to catch a swarm of butterflies. In “Global Warming in the Village of Peremilovo,” (2018), a boatful of villagers paddles past a palm tree that has sprouted in the middle of a river in now-tropical Peremilovo. In “We’re Flying!” (2017), a man and a woman in nothing but undergarments soar above a river filled with bathers, their mouths wide with joy. In each of these paintings, Lyubarov reminds us that no matter our circumstances, the mundane can become magical—if we let it.