Check Out These Thought-Provoking Additions to the National Portrait Gallery 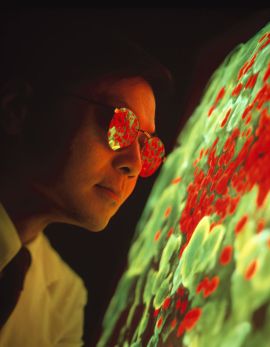 The National Portrait Gallery’s latest acquisitions, whose subjects range from activist actress to glass ceiling-shattering civil servant, prodigious musician to lifesaving medical researcher, once-famous 20th-century magician to now-famous 19th-century lawyer, have just gone on view in Washington, D.C. The assortment—25 objects in all—will remain accessible through November 4 of 2018. Below is a sample of what you can look forward to in the year ahead.

Bathed in the otherworldly yellow-green light of a large digital display, famously prolific AIDS researcher Dr. David Ho looks somehow more than human. He is contemplating a blown-up rendering of an HIV-tainted T-cell in the human bloodstream, and the bright red globules representing the virus’s progress are mirrored in the wide lenses of his spectacles. One is reminded of the multifaceted eyes of a fly; given Ho’s knack for rapid but thorough synthesis of observations, the resemblance is fitting.

This image is the work of portrait photographer Gregory Heisler, who captured it for Time magazine’s 1996 “Man of the Year” cover. The magazine chose to honor Ho, a celebrity by no means, in light of his vital contributions to checking the proliferation of the virus in its victims. “Dr. Ho’s and his collaborators’ findings have made it possible for HIV carriers to better control the virus, including during dormancy,” says curator Leslie Uruña.

Though his work in developing the efficacious highly active antiretroviral therapy (HAART) technique cemented Ho’s place in the history books, his investigations into the mechanics of AIDS are wide-ranging, and continue to this day. In all, Ho has published upwards of 400 distinct papers germane to humanity’s battle against AIDS. Lost in his own world, alone in the darkness going head-to-head with a deadly killer, Ho is a modern hero.