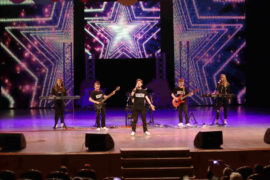 On April 21, the 19th Plasticine Crow National Children’s Arts Festival concluded in Saransk with a big gala concert. The team of the Torbeyevskoye Gas Pipeline Operation Center, branch of Gazprom Transgaz Nizhny Novgorod, had taken part in the festival.

The final round of the competition included 54 concert numbers by young performers aged between 5 and 15, representing the Republic of Mordovia and such Russian regions as the Moscow, Ryazan, Nizhny Novgorod, Penza and Ulyanovsk regions and the Republic of Chuvashia. The children’s talents were assessed by a jury led by Pyotr Sorokin, Merited Artist of Russia, in four categories: Song, Dance, Spoken Word, and Drawing.

Gazprom Transgaz Nizhny Novgorod is a wholly-owned subsidiary of Gazprom that delivers natural gas to 15 regions in the Volga and Central Federal Distr/p>s of the Russian Federation.

The company’s gas transmission system is composed of trunklines stretching for over 13,000 kilometers.

The ISO 14001:2004 environmental management system is in effect at Gazprom Transgaz Nizhny Novgorod. The company employs around 11,000 people. It is headquartered in Nizhny Novgorod.