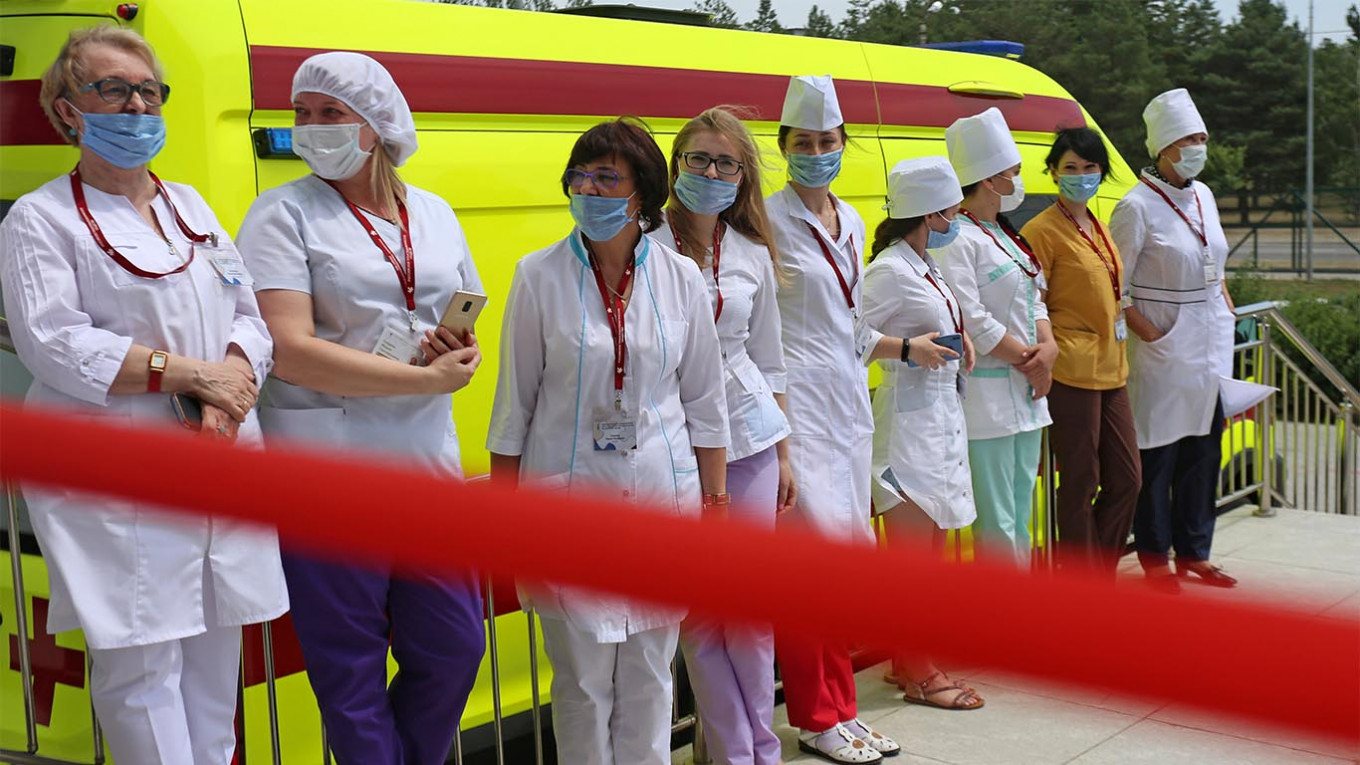 Russian health workers treating coronavirus patients across the country say they are being pressured by their superiors to vote on constitutional amendments that would allow President Vladimir Putin to stay in power through 2036.

“We simply don’t have a choice,” a doctor at the Syktivkar Republic Infectious Diseases hospital in Russia’s remote northern republic of Komi told The Moscow Times on condition of anonymity. The health worker — whose region was one of the country’s first coronavirus hotspots —  said staff were called in for a meeting last week where it was “made clear” that voting was “obligatory.”

In Russia’s Far-Eastern city of Vladivostok, medical personnel at the Vladivostok’s Clinical Hospital no. 4 are being urged to sign up for early voting, a text message sent to staff through WhatsApp seen by The Moscow Times shows.

“Colleagues, on Friday, June 19, representatives of the election commission will come to the polling station for early voting. All employees should be present with their passports,” the text message said.

Voting starts from June 25, with the official nationwide poll on July 1.

Two medical staff in the Arkhangelsk region near the Arctic and another two in the Urals region of Chelyabinsk also said their management is putting them under pressure to vote in the upcoming referendum. All four said employees are not being told how to vote.

Staff in hospitals in Moscow and St. Petersburg have not reported being pressured to vote.

Human rights critics and election observers have in the past accused the Kremlin of coercing the bloated civil servant sector into voting during elections in order to increase voter turnout. A 2014 study concluded that up to 25% of employees at large state companies were affected by voter mobilization during the country’s 2011 parliamentary elections.

On Monday, Reuters reported that the Kremlin has asked at least three major private Russian companies to distribute internal information campaigns to boost turnout in the nationwide vote on constitutional reforms.

The accounts from the medical staff come days after Russia’s health watchdog said that nearly 500 Russian medics have died after treating COVID-19 patients, a considerably higher number than in countries with similar overall coronavirus mortality rates.

During a video call with medics on Saturday, Putin expressed his condolences for those who had lost their colleagues and loved ones, calling the doctors who died “true heroes.” Russian cardiologist Alexei Erlikh, who has helped compile an independent list where colleagues report deaths, told AFP authorities are unlikely to draw any lessons from the high death rate.  “Next time this will happen again,” he said.

A nurse at the Arkhangelsk Republic Infectious Diseases hospital said she felt “frustrated” about being told to vote after working for weeks with coronavirus patients and putting her life in danger.

“This isn’t right. We shouldn’t be told what to do after all we have done.”

The vote on the constitutional changes was originally set for April 22 but pushed back due to the coronavirus. Apart from resetting presidential term limits, Russians will vote on a package of amendments that includes pledges to adjust pensions to inflation, enshrine faith in God and define marriage as a heterosexual union.

Observers have said the state has tried to play down the fact that the vote would pave the way for Putin to rule for another 12 years.

“There are lots of changes and it’s hardly possible to single out one,” Kremlin spokesperson Dmitry Peskov said last week.

The confusion over the vote was echoed by two doctors who said they did not initially understand that voting for the changes would allow Putin to stay in power until 2036.

“I only just realized, with the help of Google, why this is all being done,” a doctor in Vladivostok said. “No wonder they are so keen for us to vote.”