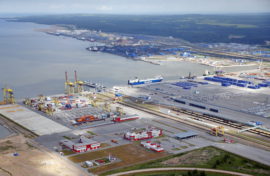 Today, Gazprom and RusGazDobycha made a decision on the final configuration of the project for a large-scale complex that will process ethane-containing gas and produce liquefied natural gas (LNG) near the settlement of Ust-Luga, Leningrad Region. The parties have thus moved to the implementation stage in the project.

It is expected to put the first train of the complex into operation in the second half of 2023 and the second train in late 2024. The project operator is RusKhimAlyans, a special-purpose company established on a parity basis by Gazprom and RusGazDobycha.

The operator’s priorities include the development of basic and detailed design documentation and the launch of land planning activities at the leased site of the future complex in the southern part of the Ust-Luga port (1,400 hectares). It is also planned to devise contracting arrangements within the project, designate EPC contractors, and place orders for long lead items.

The technical configuration selected for the project will help maximize financial benefit for the participants, primarily through integrating technological capacities within a single site, optimizing the industrial and logistical infrastructure of the complex, and using a common offshore shipping terminal. The complex is estimated to yield over USD 4 billion per year in revenue, while investment in the project is expected to exceed RUB 700 billion.

This large-scale project is of great significance for Russia’s social and economic development. During its most active phase, the construction will involve over 25,000 specialists, with more than 5,000 permanent jobs to be created to man the operation of the facility.

The plant will make it possible to increase Russian LNG exports and to take LPG exports up by 30–40 per cent. The production of ethane, which is in high demand in the domestic industry, will also grow substantially. The ethane produced at the plant is to be supplied to a high-potential gas chemical facility whose construction is to be independently sponsored by RusGazDobycha (through a special-purpose entity, Baltic Chemical Complex). The estimated capacity of the future gas chemical facility is over 3 million tons of polymers per year.

“Today, we have launched the implementation of an ambitious project that is simply unparalleled in Russia. Within a short time, we are going to build the most powerful gas treatment and liquefaction plant in the country. Together with the technically affiliated gas chemical facility, it will grow into a large modern industrial cluster in the northwest of Russia.

The decision made today is a practical manifestation of the new economic model for the comprehensive monetization of hydrocarbon resources. Combining the production of LNG and ethane within one industrial site will have a beneficial effect on the economics and specific indicators of the project and will allow us to considerably mitigate our resource and price risks,” said Alexey Miller, Chairman of the Gazprom Management Committee.

In May 2017, Gazprom and RusGazDobycha signed a Memorandum of Intent to implement projects aimed at advancing petrochemical production on the basis of the Achimov and Valanginian deposits within the Nadym-Pur-Taz region, as well as extracting and processing gas and condensate from the fields within the Tambey cluster (Tambeyskoye and Tasiyskoye fields owned by Gazprom).

RusGazDobycha is a special-purpose company created by the National Chemical Group to increase the efficiency of the production chain, get access to resources (natural gas), and invest in feedstock production and processing facilities.

Trump Will ‘Probably’ Talk to Putin About VenezuelaDown By The River: Moscow’s Iconic Northern River Terminal