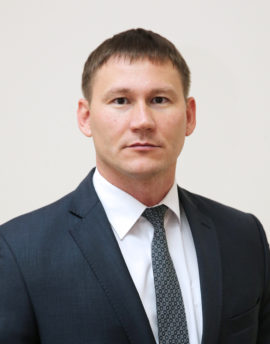 Denis Vasyukov was born in 1977 in Kemerovo. He graduated from Tomsk Polytechnic University, majoring in Machine-Building Technologies. He has an MBA.

He has been employed with Gazprom for over 16 years.

Between 2002 and 2010, he rose through the ranks from Dispatcher to Chief Engineer – First Deputy Director of the Yurginskoye Gas Pipeline Operation Center at Gazprom Transgaz Tomsk.

2010–2016: Head of the Production Division for Gas Trunkline Operation at Gazprom Transgaz Tomsk.

Gazprom Transgaz Krasnodar, a wholly-owned subsidiary of Gazprom, operates over 9,000 kilometers of gas trunklines, 14 compressor stations, and more than 350 gas distribution stations. The company’s facilities are located in the Krasnodar Territory, the Rostov Region, and the Republic of Adygea.