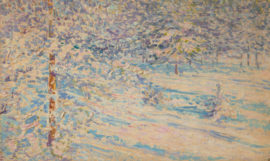 The private Museum of Russian Impressionism was founded less than five years ago, but it has already become an important part of the Moscow art and museum scene. Its significance is not only thanks to its architecturally stunning venue — a reconstructed sugar silo at what was once a confectionary factory — and its central contention — still challenged in some quarters — that Russian impressionism exists as a wholly distinct movement in art; and its innovative exhibition designs — uniquely constructed for each show; but also thanks to its superb research and curatorial work. Each exhibition is a voyage of discovery. The last show introduced the artist David Burliuk to the public, revolutionizing perceptions of the “father of futurism.” The show before that exhibited impressionistic works by painters who went on to become the avant-garde, with each painting a surprise that cast the artist’s development in a new light.

The current show is no exception. “Nikolai Meshcherin: Away From Vanity” introduces a major artist who was virtually unknown for the past century. The more than 100 works on display, gathered from 17 public and private museums and five private collections, present Meshcherin as a painter, photographer, and generous host whose estate, Dugino, welcomed some of the finest Russian painters of the late 19th and early 20th centuries. Paintings by Meshcherin from every period of his life are exhibited along with works painted at Dugino by such artists as Igor Grabar, Isaak Levitan, Vasily Pereplyotchikov, Apollonary Vasnetsov, Alexei Korin, and Alexei Stepanov.

Meshcherin was born in 1864 into a large merchant family. His father founded the Danilovsky textile  factory and co-owned it with the illustrious art collector Sergei Shchukin. Although Nikolai studied at the Moscow Practical Academy of Commerce and was being groomed to take over the family business, he quickly realized that he had no interest or aptitude for business. He wanted to paint. 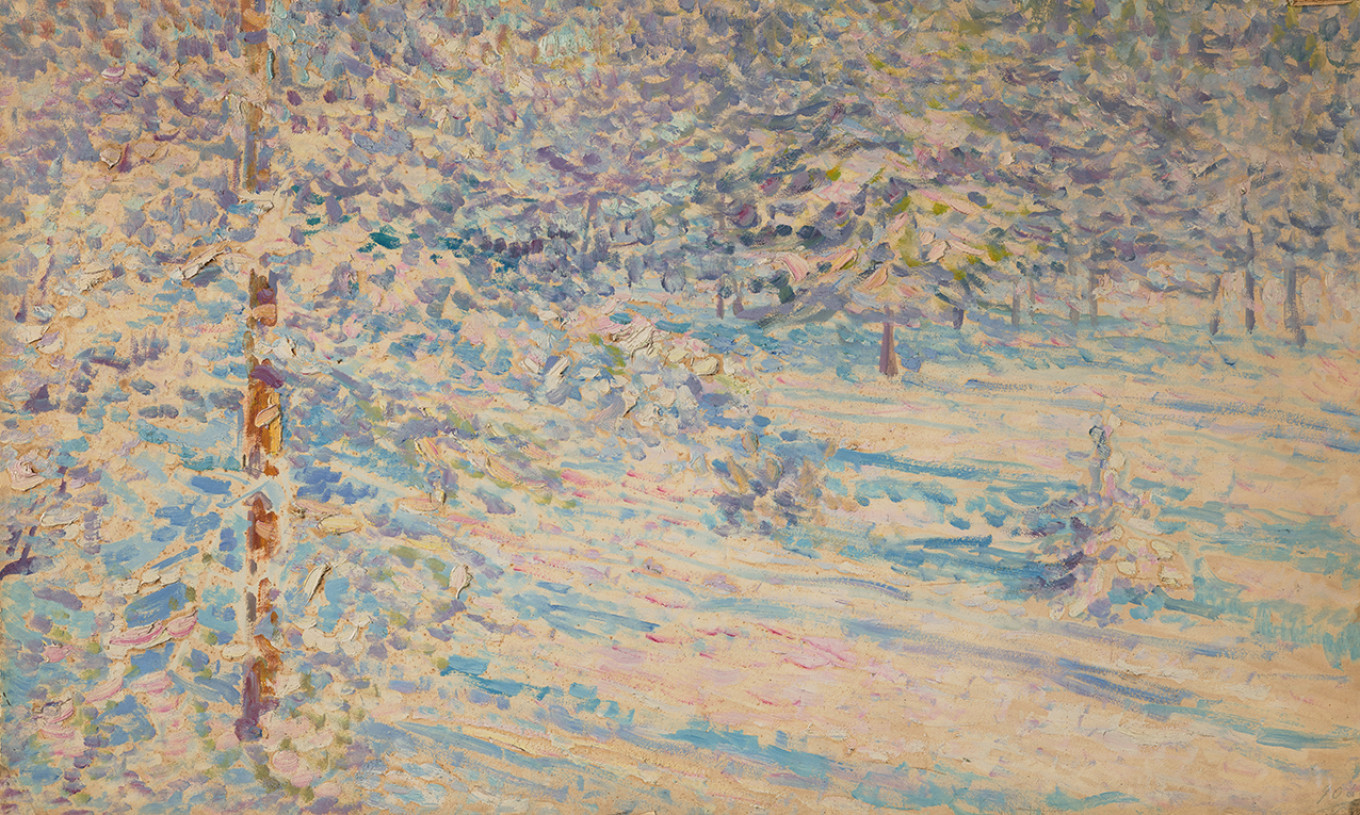 In 1872, the family purchased an estate called Dugino to the southeast of Moscow, and Nikolai began spending much of his time there. On this beautiful spot above the Pakhra River, the extended family and friends would gather to indulge in the Meshcherin “cult of hunting” and later in what would become the family “cult of painting.” Artists and friends came and stayed for months. In the mornings, everyone took part in the ritual of morning tea set in the garden under young linden trees. There were festivities, hunts, singing and long hours at easels.

Meshcherin painted in every season of the year, at every hour of the day and night. When it was too dark, rainy, or cold to paint, he took elaborate notes on the changing colors of the sky, the ebbing light, shadows, and reflections. He wrote, for example, on Oct. 4, 1905, “The moon – a dark blue color, the stars a lighter blue, and dim (at times the moon cannot be seen). A bluish pearly radiance emanates from the moon, a bright halo. The moon’s tones are irregular…” He also took photographs — not just portraits and scenes around the estate, but what might be called “art photography” in the woods and meadows on and around the estate.

lf some of Meshcherin’s earlier works were rather conventional landscapes or derivative of French impressionists, the works he did in his later years are done with a free and confident hand — delicate images that create powerful impressions. 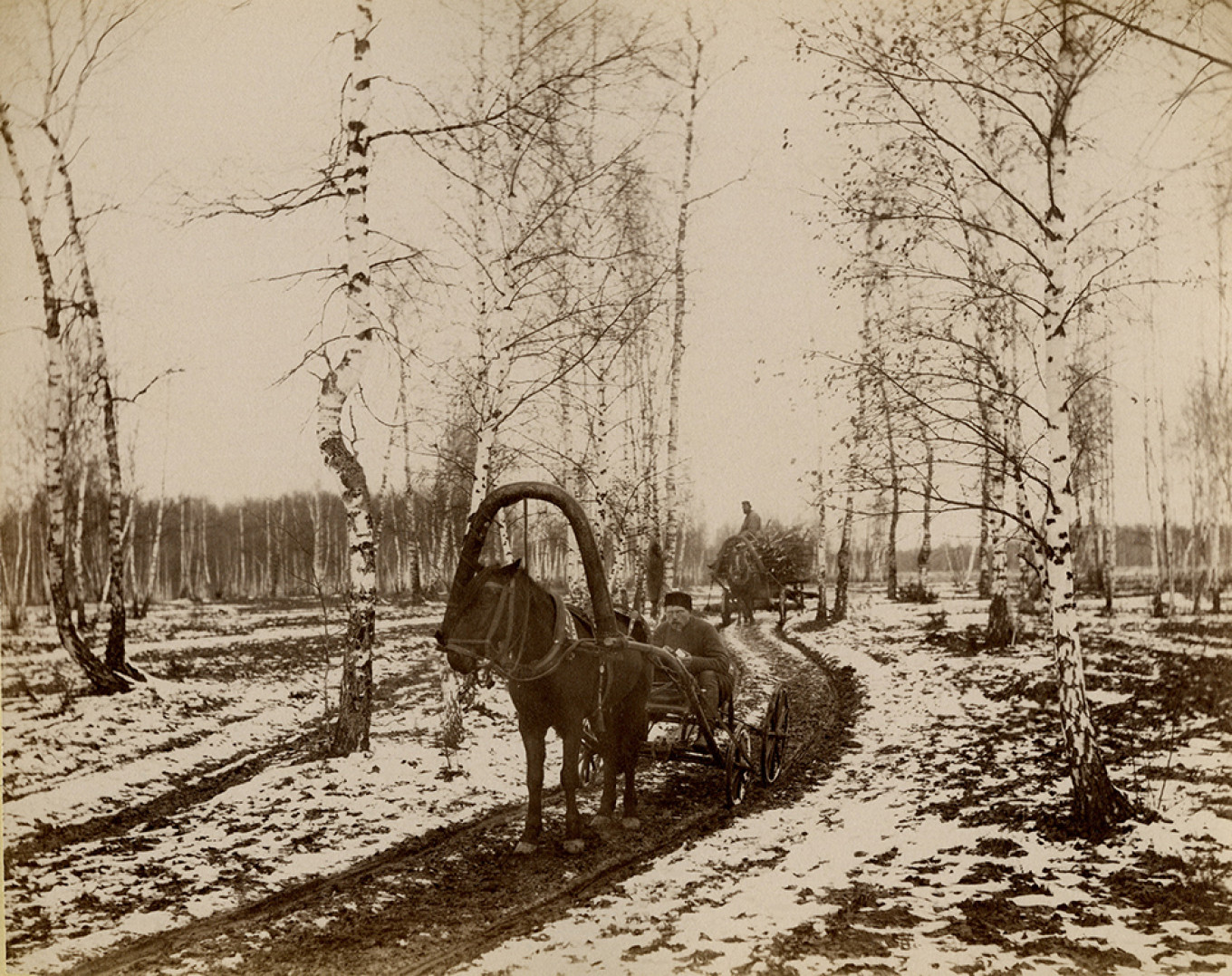 “First Snow in Dugino,” 1886 Courtesy of Museum of Russian Impressionism

Meshcherin took part in the many exhibitions in Russia as well as in Sergei Diaghilev’s “Russian Art” exhibition in Paris and Berlin in 1906.  But although he exhibited frequently, Meshcherin sold few paintings during his lifetime — he joked that he sold canvas cloth, not painted canvas. After his death in 1916, and after his family’s property in Moscow and Dugino had been expropriated by the state along with the family businesses, his widow sold some of his works, mostly to private collectors and small provincial museums.

Perhaps because he died just before the 1917 Revolution overshadowed all life in Russia, or perhaps because the attention of the art world became focused on the avant-garde, his work and name quickly faded. Only in the 1970s and 80s were there exhibitions and monographs about his work.

The exhibition at the Museum of Russian Impressionism, held jointly with the Tretyakov Gallery, is the first major show of his art. 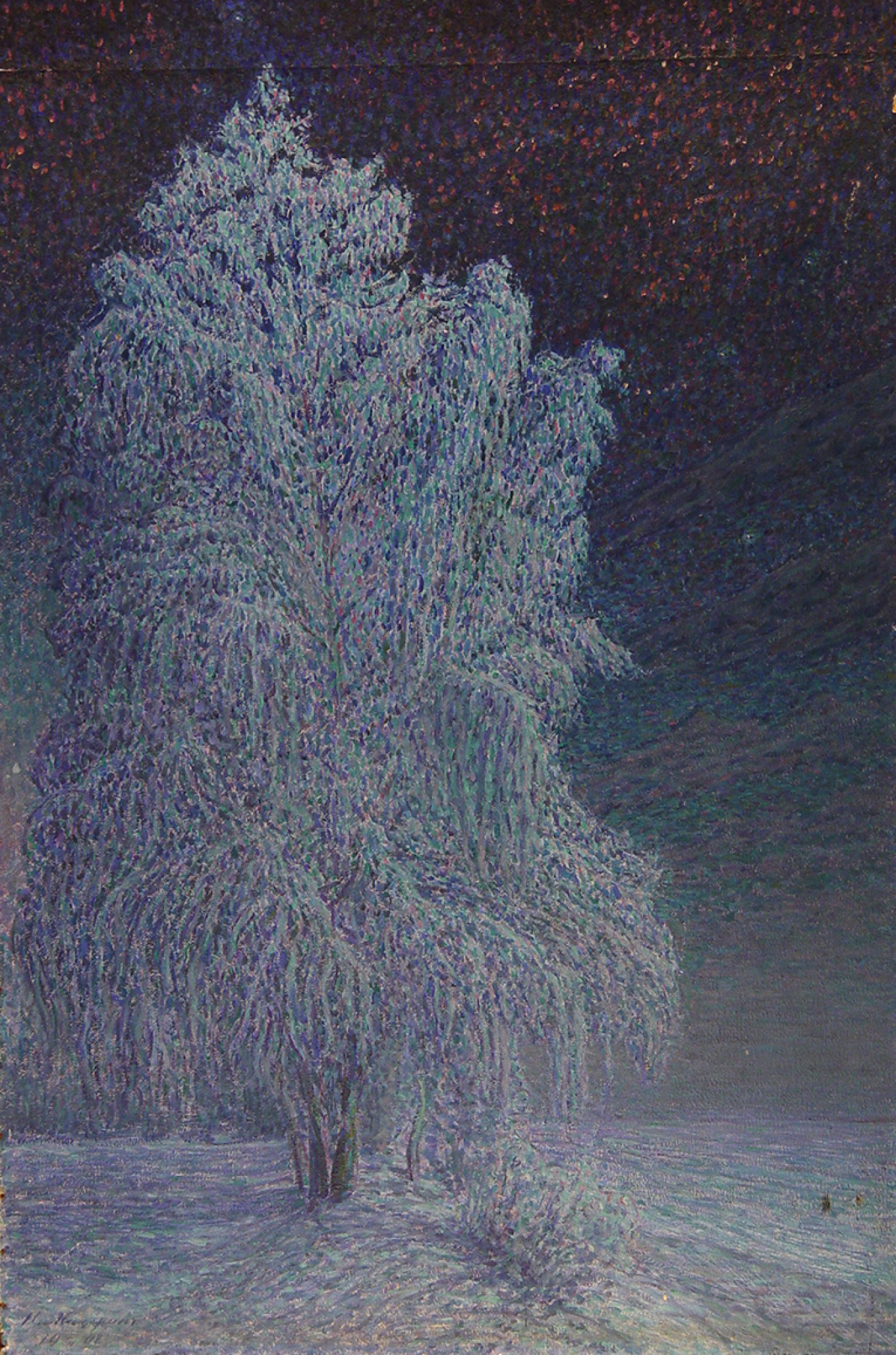 The show is organized by season at Dugino, “away from the vanity” and bustle of life in the capital. Each season is represented by works by Meshcherin from various years along with works by the artists who stayed at the estate. It begins in winter and includes the magical “Cold Winter Night” (1908) of an ice-covered tree that seems to glitter under the starry black sky.

At the intersection of winter, spring and summer are two paintings on one canvas. Curators examining “Rye Fields” done in 1906 discovered on the reverse side a magnificent snow-scape called “The Edge of the Forest in Winter.”

Spring paintings show the snow-covered fields March and April in northern Russia, but summer is an explosion of color, as Meshcherin and his visiting artists capture the vast skies and fields of wheat and wildflowers, the local church and morning tea table. Meshcherin also painted dozens of small etudes of sunrise in one place on the estate, similar to Claude Monet’s exploration of light and color in painting the Cathedral in Rouen.

Autumn shows some of Meshcherin’s finest works, like the delicate birches in “Autumn Morning” (1905). The exhibition ends with a collection of his photographs taken in various years at Dugino, capturing hunters, hunting dogs, the fields and forests in winter, and even some of the grooms posing with flowers in summer.

The exhibition is ending its run this weekend with a plethora of special events to mark both Meshcherin and Night in the Museum. The museum will be open free of charge from 6 p.m. until midnight.

After seeing the permanent exhibition and “Away from Vanity,” you can sit on the terrace under a warm blanket with a flashlight (provided by the museum) and grab a book to read from the library of the Yelena Shubina publishing house. At 7 p.m. you (and your kids) can take a break to listen to Alexandra Nikolaenko read an excerpt from her book “Fedya Bulkin, Heavenly Postman.” There will be a question and answer session afterwards, followed by an “art battle” — illustrations done on the spot by artistic young readers. 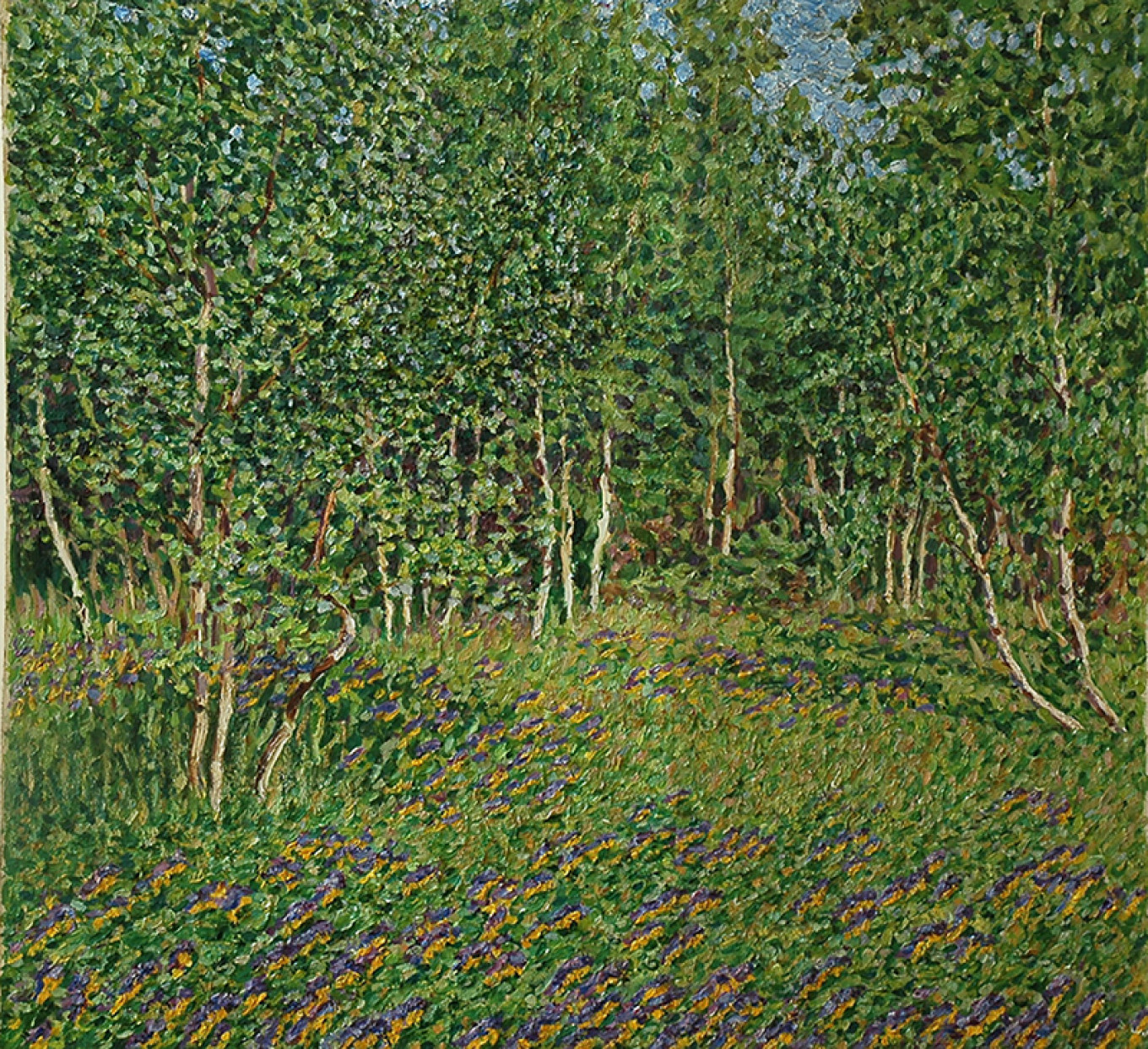 “Field,” 1914 Courtesy of State Museum of Fine Arts, Republic of Tatarstan
Why Are Russians Clashing Over a New Cathedral in Yekaterinburg?Britain Scrambled Fighters Twice to Intercept Russian Aircraft in Baltic