Culture | Does the Narwhal’s Majestic Tusk Have a Point?
RssMail

Does the Narwhal’s Majestic Tusk Have a Point? 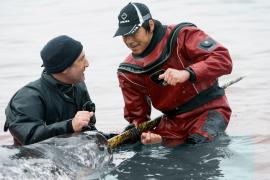 The narwhal’s spiraling tusk has a way of hypnotizing those who study it. The 17th-century Danish zoologist Olaus Wörm, for example, grew fascinated with these ivory spars, struggling to unveil their scientific properties, even as he mocked his contemporaries for confusing them with unicorn horns. Where the tusk was concerned, Wörm’s work was uncommonly precise. In his book Narwhals: Arctic Whales in a Melting World, for example, naturalist Todd McLeish praises the early modern scientist’s “beautiful and accurate illustrations of narwhal skulls, obviously drawn with a specimen in hand.”

Wörm fared less well when he turned his attention to the animal’s body. As McLeish writes, his “depiction of the narwhal itself looks more like a dolphin or a tuna, with two dorsal fins, one long ventral fin, [and] a narrow fish-like tail.” For all the empirical care Wörm brought to the whale’s most prominent feature, he had, in effect, let his mind wander when he attempted to imagine the rest of its body.

In the centuries since, those tusks have remained understandable objects of fascination, even as we’ve discovered more about the animals from which they sprout. Many of the lessons we’ve learned since Wörm’s day are on display in a new Smithsonian exhibition, “Narwhal: Revealing an Arctic Legend,” at the Smithsonian’s National Museum of Natural History in Washington, D.C.

Some of that information derives from meticulous observation of these near threatened creatures: We know, for example, that three distinct populations of narwhal are scattered throughout the frigid north. Known respectively as the East Greenland, Hudson Bay, and Baffin Bay populations, these groupings vary in size, but estimates suggest that there are close to 160,000 narwhals in the wild. Highly social, narwhals travel in pods, often broken off by sex, and communicate via complex vocalizations that seem to be specific to their herds.

For all that, as the Natural History Museum’s exhibition also suggests, the more we find out about this unusual creature, the more intriguingly mysterious its tusk has become.

Few have done more to lay those puzzles out than Martin Nweeia, a dentist from Connecticut, who served on the narwhal exhibition’s core team.

Here, you might reasonably ask why a dentist, even an experimentally minded one, would turn his eye to the narwhal. The most obvious answer is that the narwhal’s characteristic horn isn’t a horn at all. Instead, it’s a tooth that improbably projects outward from the jaw as it develops.

While Nweeia acknowledges that scientists are generally shy about superlatives, he leaps to understandable extremes when asked how he came to study the tusk. “My interest as a dentist was finding the one example that didn’t make sense, and this was clearly it. This, by any measure, is the most extraordinary tooth on the planet,” he says.

From a dental perspective, though, it’s not just that one tooth that’s strange. During their embryonic development, narwhals have the capacity to form 14 teeth, but only two ever develop. In most male narwhals, one of those teeth develops as the tusk, while the other typically remains impacted in the jaw. (A very small percentage of narwhals do grow a second tusk, but the two grow asymmetrically, the rarer second remaining shorter than its twin.)

For Nweeia, these long-established facts were puzzling. “This is a marine mammal that eats pretty big fish. It eats arctic cod; it eats Greenland halibut. These are substantial fish,” he told me. Elaborating on that, he pointed out that it’s peculiar to see such a disconnect between dental morphology and diet: “You would expect it to have teeth in its mouth, something to chew the food with. And yet, if you look at the narwhal mouth, there’s not one tooth.”

Given those observations, it seemed reasonable to suggest that the tusk should have some practical function, some evolutionary raison d’être to offset the challenges it presents. The trouble is that actually studying the whales can be difficult. At first, Nweeia said, he and his colleagues were only able to work with the remains of deceased animals provided by hunters. What fascinated him, though, was an anatomical model first uncovered, he told me, in 2005 that showed millions of nerve connections spread through the teeth. To better understand what information those networks provided, though, he needed access to living animals.

Getting to them was difficult, since narwhals can be an elusive species, accessible to researchers in just a few locations such as Tremblay Sound, Nunavut and Pond Inlet in the Canadian High Arctic for only a few months of the year. “You invest all this time, effort, energy into a narrow window of time where you are unsuccessful. Just think how that feels. Then you’ve got to wait another year to have that opportunity again,” he said.

Even when you can net a narwhal, studying it is no easy task. Nweeia and his colleagues had to wade out into frigid water, conditions so cold that they needed to pull on wetsuits to protect themselves.

As he tells it, conventional batteries for their equipment would rapidly drain in the frigid air, but that proved least among their problems. “We were attaching essentially hospital-grade equipment—in this case, electroencephalogram for brain activity, and electrocardiogram for heart activity—and the electrodes that we needed for those had to be attached.” That, in its own turn, meant mucking about with suction cups and other tools that could hold up against the water.

Ultimately, the work paid off for Nweeia. In 2014, he published a paper in the journal Anatomical Record in which he and his co-researchers wrote that the tusk appears to be a sensory organ. His work found that the tooth is, at the very least, responsive to different levels of salinity in the surrounding water.

In his book on the species, McLeish writes that some biologists have questioned these findings. Since female narwhals rarely have tusks of their own, many researchers have long believed that the tusks have more to do with mate selection. McLeish writes: “They believe . . . that the tusk is a secondary sexual characteristic, like the mane of a lion, the antlers of deer, elk, and other ungulates, or the tail feathers of a male peacock.” In their Anatomical Record paper, Nweeia and his colleagues acknowledge that this is likely true, but offer a handful of hypotheses about the ways that the tooth’s sensory function might contribute to mate selection and the rearing of young.

Nweeia and his team recognize the need for still more observations of narwhals in the wild in order to make sense of the tooth’s sensory function. But while such studies will be difficult to conduct, much is being learned. Recent drone footage, for example, seems to show narwhals using their tusks to stun prey. If those observations are accurate, it seems likely that the tusks are practical in ways that go beyond mating.

Above all else, though, such discoveries remind us how little we know about the narwhal and its mysterious tusk, despite the many years that scientists have spent contemplating it. There are, however, some observers who’ve been watching it for longer still—the Inuit have been hunting narwhal for centuries. Anthropologist William Fitzhugh, another curator of the exhibition, affirms the significance of traditional knowledge. “The Inuit have a long history with the animal,” he says, “and they have mythology about it. They know this animal from its actual behavior, from the time it appears, and so forth.”

Nweeia, for his part, notes that the discovery of narwhals stunning fish, for example, “had already been talked about by the Inuit elders. That’s nothing new for them.”

Attending to such observations has already led to other discoveries. The book that will accompany the Smithsonian exhibition, for example, quotes one of Nweeia’s diary entries from 2005, in which he describes hearing from an elder who said that the narwhal’s tusk is readily bendable when it is swimming. Though Nweeia doubted it at the time, subsequent studies by Frederick Eichmiller, another dentist with a passion for narwhals, bore the observation out, showing that the species’ tusks could flex a few degrees in every direction.

As scientists (and dentists) continue to plumb the strange mysteries of this animal’s tusk, researchers will likely have to demonstrate a similar flexibility.

“Narwhal: Revealing an Arctic Legend” is on view August 3, 2017 through 2019 at the Smithsonian’s National Museum of Natural History in Washington, D.C.