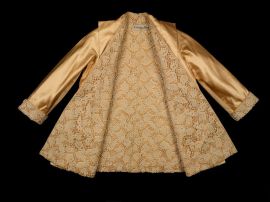 This winter season, a dazzling new batch of exhibitions are opening up around the world. At these 10 museums, explore Dior’s enchanting designs, step into the first major exhibition at the new Louvre Abu Dhabi and read the pages of an underground magazine created in a Nazi concentration camp.

For the House of Christian Dior’s 70th anniversary, the Royal Ontario Museum is hosting a retrospective of the designer’s work compiled from his first ten years in the haute couture business. The highlighted pieces date from 1947 to 1957 and document how the designer helped revive the fashion industry in Paris after the destruction caused by World War II. The exhibit showcases a wide range of designs, including daytime and eveningwear, and includes an in-depth examination of the luxurious textiles and embroidery the designer employed in his work.

In the museum’s first ever foray into augmented reality exhibits, Miami-based artist Felice Grodin takes over with Invasive Species. The exhibit is interactive and digital; visitors use iOS devices to reveal four digital pieces located in the outdoor areas of the museum and on the first-floor theater. One piece, titled Terrafish, reveals the translucent body of an imaginary creature hoovering over the museum’s hanging gardens. The pieces are designed to enhance and engage with the building itself.

Furniture and fashion often go hand-in-hand, and no other exhibit explores this connection in such a way as Subhuman Inhuman Superhuman. This exhibit is the first retrospective in the world that’s dedicated to designer Rick Owens and his fashion and furniture career. Owens has created the design of the exhibit himself, picking pieces from his already existing archive in addition to creating an entirely new art installation. The pieces in the collection will demonstrate Owens’ penchant for mixing poetry and art with punk and anarchy.

Institute of Texan Cultures—The Will to Adorn: African American Dress and the Aesthetics of Identity

Highlighting groundbreaking work from high school students in San Antonio, The Will to Adorn focuses on the influence of African American dress and how it relates to identity. Students went out into the community to do research, conducting interviews with local experts and neighbors at salons, shops and braiding salons. Community traditions and self-expression run as a central theme throughout the exhibit. This project, administered by the Smithsonian Center for Folklife and Cultural Heritage, is the first research on this topic in the San Antonio area.

Louvre Abu Dhabi—From One Louvre to Another

As of November, the newest extension of the Louvre is now open in Abu Dhabi. The inaugural exhibition, From One Louvre to Another, opens December 21 and traces the history of Paris’ Louvre back to the 18th century. The exhibit is broken into three sections: the first looks at King Louis XIV’s royal art collections at Versailles, the second tracks the conversion of the Louvre into a palace for artists through the Academy and Salons that once held residence there and the third explores how the Louvre became the museum as we know it today. The show highlights roughly 150 pieces of art—including paintings, sculptures, furniture and ceramics—both from the Louvre’s collection in Paris and from the collection at Versailles.

Few things are as iconically American as a road trip—taking to the open highway in a car with friends or family, or even alone. It’s been a transforming pastime throughout the history of the U.S., be it for finding a new place to settle or just finding out a little bit more about yourself. The Open Road documents that American habit through photos, combining stories and images from 19 photographers who found their muse on the vast network of highways in America. The 1930s and 1940s were prime times for photographers to take off across the country, all hoping to document post-war America, or at least to help themselves better understand their place in the world.

Minneapolis Institute of Art—Power and Beauty in China’s Last Dynasty: Concept and Design by Robert Wilson

The Qing Dynasty in China, which lasted from 1644 to 1912, was not only the final imperial dynasty, but also the biggest champion of the arts in Chinese history, rivaling the art scene in Europe. This exhibit attempts to harness that artistic prowess with a figurative walk from the external image of the imperial court to the private lives of the emperor and his family. Each room of the exhibit is accompanied by an original soundscape designed by theater artist Robert Wilson. Items not to miss include a 640-pound jade mountain sculpture that was commissioned by the Qianlong emperor, the empress’s formal court robe, a carved imperial throne and a portrait of prince Duo Lou.

The Driehaus Museum—The Art of Seating: 200 Years of American Design

Starting in February, Chicago’s Driehaus Museum will celebrate the art of an every day object: the chair. The Art of Seating showcases 37 chairs dating from 1810 to 2010. The pieces were chosen to display how each chair reflects the American culture of the time it was created. Don’t miss chairs designed by greats like Frank Lloyd Wright, Eero Saarinen and Frank Gehry, alongside modern representations of seating from manufacturers like Herman Miller and Steelcase. One of the prize pieces in the collection is an original chamber armchair from the House of Representatives in 1857. These chairs were often showcased in political portraits like those of Abraham Lincoln and Andrew Johnson.

Coming to the Denver Art Museum, and only the Denver Art Museum, will be an exhibition of Degas’ work from 1855 to 1906. More than 100 pieces will be on display, including drawings, pastels, monotypes, bronze sculptures, etchings and paintings. The goal of the exhibit is to allow visitors a chance to see inside Degas’ creative process while exploring his public and private life at the same time. Several repeating themes include his fascination with horses, opera, dance and the nude figure. The exhibit will follow the artist’s career, from his early portraits and historical subjects to his later works focusing on contemporary Parisian life in the late 1800s.

Oregon Jewish Museum and Center for Holocaust Education—Vedem: The Underground Magazine of the Terezin Ghetto

From 1942 to 1944, seven teenage boys aged 13 to 15 defied the rules of their Nazi camp and produced a secret, underground literary magazine called Vedem. They were imprisoned at Terezin in Czechoslovakia and while there, created 800 pages of drawings, paints, prose, poetry and pop art. The boys had a standard magazine structure with Petr Ginz serving as editor-in-chief, hiding unfinished issues of the magazine in a small shelf behind his bunk; Kurt Kotouc as the managing editor and cultural correspondent, reporting on theater shows and concerts the Germans allowed the residents of Terezin to hold; Sidney Taussig as the sportswriter and eventual correspondent covering the crematorium at Terezin; Hanus Hachenburg as the magazine’s poet laureate; Zdenek Ohrenstein, the magazine’s love poet; and George Brady and Leo Lowy as contributors. Ginz and Hachenburg both died at Auschwitz in 1944; the other five manged to survived the Holocaust. Vedem’s survival is mostly thanks to Taussig, who buried back issues in a metal box underground, returning after the war to dig them up and preserve them. This exhibit reconstructs the 800 pages into the format of a contemporary magazine.