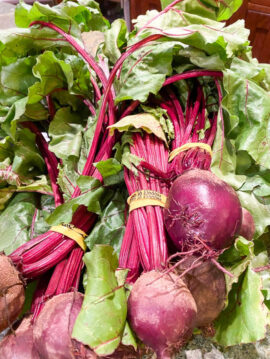 I love soup season, and where I live, this lasts about nine months of the year.  As you may imagine, borshch is in heavy rotation in our household, but as I’ve written before, no two pots of borshch are ever the same. There is no hard and fast recipe for borshch; it varies depending on region, available ingredients, and family traditions. In pastoral landscapes, lamb is the preferred meat base, while arable folk prefer beef or pork.

I love borshch made with duck breast, but I’ve also seen it done well with bison, quail, and venison. There are those who abhor putting apples in the mix, while still others argue that potatoes or beans just take up too much room in the pot. Tomatoes, carrots, and parsnips are common, but in parts of the world, so too is ginger, pomegranate syrup, and lovage. Borshch is usually purple or red, but it can also be green, particularly in early spring when peppery sorrel heralds the welcome return of tender shoots and fresh herbs.

I come to borshch blessedly free of ethnic, or familial predilections — both my grandmothers were far more adept at mixing cocktails than concocting beet soup, and neither would have dreamed of ruining a good manicure by peeling two pounds of beets. Sometimes I yearn for an inherited cache of soup-splattered recipe cards, written out in an old-fashioned copperplate hand in sepia ink, but the flip side of this is that I feel very free to improvise, experiment, and even go off piste a bit. Over the years, I’ve done just that, to create a borshch that comprises basic ingredients, but the final flavor and texture of each batch will depend on the weather, my mood, and what lurks in the refrigerator crisper, or what looked too good to pass up that week at the farmer’s market. Recently, I’ve discovered dill and fennel pollen, which are welcome additions to the pot, as is quince, an apple-like fruit, which is happily in season. I’ve also tried persimmon (you should too), lemongrass (an acquired taste), and Thai basil (which alas did not work well at all). The lesson here is that you will never know until you try!

Two ingredients I always include in my borshch are raw beet leaves with their stems, and this has raised many eyebrows in certain conservative borshch quarters. I cannot think why: beet greens are dense in nutrients, with high levels of nitrites, Vitamin A, Iron, Vitamin B6, calcium, magnesium, Vitamin D, and Vitamin K. One cup of beet greens contains high percentages of the RDA for each of these important nutritional elements, so it is sheer insanity to consign them to the compost. But I also use them because they look marvelous and add a lovely peppery flavoring to the borshch.

Savory stuffed pastries or rolls should accompany borshch; garlic-infused sweet yeast rolls called pampushki are popular in Ukraine, and classic piroshki filled with cabbage, mushrooms, or meat, are the norm across Eastern Europe. But both these delicious accompaniments require a bit of planning, since yeasted dough requires several rises.

Phyllo dough to the rescue!

You may find the concept of phyllo dough daunting, but it is remarkably easy to work with — pliable as long as you keep it covered with a damp tea towel, and so forgiving! All you need is a little melted butter to deal with any rips or tears. It doesn’t need a complicated set of risings, kneading, or any kind of special tools. This makes whipping up a batch of these little triangle pastries blessedly straightforward, and they come together in about 90 minutes, which is about the time it takes for borshch to simmer (see recipe below).

The inspiration behind these triangles is Greek spanakopita, the layered spinach, feta, and phyllo pastry pie and the popular Moldovan pies made from beet greens. Instead of a large pie, I’ve used sautéed beet greens and their stems, brinza (a feta-like cheese), and Russian tvorog to make smaller, individual phyllo triangles, which take less time to cook and are a lot easier to dunk into a bowl of borshch. Alongside a bowl of soup, they make a perfect autumn lunch, but can work equally well as an hors d’oeuvres, or (as my household discovered after multiple recipe development sessions) an accompaniment to grilled meat or fish. Served with a salad, they make a delightful light lunch, the kind you can enjoy al desko, as Work-At-Home becomes a semi-permanent way of life.

*Recipe Note:  both lamb shanks and beef ribs produce a lot of fat and although this contributes greatly to the flavor of the soup, the final amount may be more than you wish to have glistening on the top of your borshch. To reduce this, chill the braising liquid until the fat rises to the top and creates an easily removed layer. Alternatively, use a fat strainer to separate the fat from the braising liquid.

*To clarify butter, melt the amount of butter you require plus 1 additional tablespoon. Allow the melted butter to cool slightly, then use a flat spoon to scrape off the collected milk solids, which will rise to the surface.