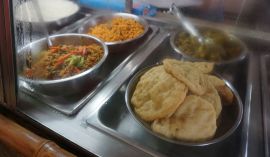 “At one point, lobster was considered to be prison food, and now it’s one of the most expensive items on a dinner menu,” Anquanette Gaspard, owner of Virgin Island Food Tours and host of the Taste of Twin City tour on St. Croix, U.S. Virgin Islands, told Smithsonian.com as she led a group of hungry travelers around downtown Christiansted. There’s no lobster on the tour, but her statement is an example of how food can help tell the history of place, particularly one that’s gone through dramatic transition—from Danish slave colony to tourist hotspot. “I strongly believe that you can’t know where you’re going if you don’t know where you’ve been,” she said. “Because we’ve kept these food traditions, we’ve been able to see them grow and evolve over time. Here on St. Croix, we’ve taken these food traditions and modernized them while still preserving the tradition of how they’re served and prepared.”

Gaspard’s tours are new to the island—they started in late November as the first and only food tours on St. Croix—and through them, she strives to show the history and tradition of how food reflects the islanders’ past. It’s a particularly good year for it, too; 2017 is the centennial of the USVI’s transfer from Danish to American ownership.

Crucian cuisine is a complicated blend of styles, encompassing bush food created by indigenous islanders, Caribbean dishes from other islands in the region, Rasta food that speaks to the cultural and spiritual traditions of some of the island’s locals, and sweets crafted around readily available ingredients. Much of the traditional food on the island evolved from slave meals, finding basic ingredients and making them into something easy to carry that can sustain you all day.

“Because the slaves often had to travel far distances to get to the fields, food was always something that could be easily carried and consumed along the way,” Gaspard said. “This could be the reason why we rarely sit in and eat at restaurants. It’s almost always taken to go.”

And even though the Danes owned the island for about 200 years, not many of those food traditions—aside from salted fish—remain, because the climate is so vastly different from that of Denmark that ingredients are not readily available. There’s also a healthy dose of typically American food brought over throughout a century of U.S. ownership, but Taste of Twin City deftly avoids that in favor of more historically traditional eats.

“Each stop highlights a piece of our history that helps to shape who we are as a people,” Gaspard told Smithsonian.com. “Within each tasting, you learn how the migration of people from other Caribbean islands influenced our cuisine, how certain dishes were made because of the ingredients that are grown and sourced on-island, and how recipes have been passed on from one generation to the next, reminding us of where we came from.”

There are six stops on the tour. The first is a ready-to-go place that blends Crucian and Trinidadian food traditions. Here, visitors dine on rotis, fried dough stuffed with (usually curried) meat or seafood. It’s a typically Trinidadian tradition, but was once pocket food for people going to work on the islands—buy one in the morning on the way to work and have it later for lunch. Next, tour-goers head to Gary’s, an unmarked bakery known well by locals, but only identifiable to visitors by the streams of people heading in and out. The soft, dense, and mildly sweet butter breadhere is particularly special to Gaspard, with a cup of steaming tea made from local lemongrassand a smattering of ingredients found in the bush. The tea can often include ginger, mint, and basil, but the ingredients are really up to the bush picker that morning.

“There is something almost magical about our butter bread,” Gaspard said. “It was a staple food that sustained men and women for decades while they toiled in the fields or on the water in boats. Getting a hot butter bread from the bakery early in the morning or late in the evening on the way home and biting into it when it’s piping hot is just heartwarming. You don’t need to add anything to it. For me, it evokes a memory of togetherness with family and having the privilege to grow up on an island with the very best this world has to offer.”

Next on the menu are chicken, beans and rice from a combo Crucian-Puerto Rican restaurant, a filling meal with origins in both plantation slave food on St. Croix and the Puerto Rican traditional meal of beans and rice. The ingredients were easy to find and the recipes simple to make, and what was once meant to sustain a day of work in sugarcane evolved into a much-loved meal by the islanders after emancipation.

The fourth stop on the tour is Ital in Paradise, a vegan- and vegetarian-friendly spot serving freshly made Rasta cuisine. Rastafarianism first developed in Jamaica in the 1930s. Elder Rastafaris on St. Croix say that the religion made its way to the island shortly after it took root in Jamaica. “Ital” is the standard name for Rasta cuisine. The food is mainly vegan, with no additives or chemicals. The menu at Ital in Paradise changes daily, working with what can be freshly picked and is seasonally available. On our tour, we had falafel and a minty green cucumber sauce.

The last two stops could be considered the dessert stops of the tour. One is a bar and restaurant where you get a typically American island drink: a rumrunner. Rum has been made on the islands since the 1700s, when sugarcane plantations covered the land. Rumrunners themselves were supposedly invented in Florida in the 1950s; they quickly became a favorite drink for Americans and an easy way to cater to tourists on the Virgin Islands. The other stop is an ice cream shop with local fruit flavors found only on St. Croix, like gooseberry—and it boasts a monthly subscription box to ship treats to locals who moved to the mainland and miss the taste of the islands.

If you’re planning to split your time between the islands, there’s also a new food tour on St. Thomas. This one goes through the downtown of historic Charlotte-Amalie and mixes island history with traditional food, as well.