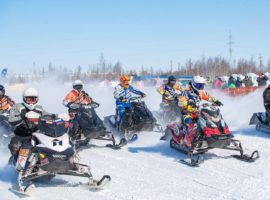 Fifty snowmobile racers from Novy Urengoy, Muravlenko, Surgut, Almetyevsk and the Tyumen Region covered a track on a man-made snow surface with ramps and tight turns. The competition was held in the following classes: Juniors, Adults-Supersport A, Adults-Supersport B, and Boys.

The final round consisted of three snocross series, during which the racers from the Fakel club of Gazprom Dobycha Urengoy won the top places in the individual and team competition.

At the close of the Russian Snocross Championship and Tournament organized by the National Russian Motorcycle Federation, all the prize places in the individual Adults-Supersport A competition were taken by the Fakel athletes: Yakov Karpman took the gold and the title of champion of Russia, the silver went to Sergey Romanenko, and Evgeny Martyuchenko seized the bronze. Their co-members secured the top spots in the Adults-Supersport B class as well: Maxim Sviridok earned first place and the champion title, while Vadim Kuklin (also from the Fakel club) took third place. Club member Sergey Grachev became the bronze medalist among Juniors.

Gazprom Dobycha Urengoy, a wholly-owned subsidiary of Gazprom, was set up to develop the Urengoyskoye oil, gas and condensate field. Its production infrastructure consists of 22 comprehensive gas treatment units, 2 oil production sites, 20 booster compressor stations, 5 gas cooling stations, more than 2,800 production wells, 2 compressor stations for the utilization of associated petroleum gas, and a pump station for condensate delivery. Over the years, the company has laid more than 1,300 kilometers of inter-field and 2,800 kilometers of in-field pipelines, and created an extensive industrial infrastructure that ensures reliable operation of the oil and gas production facilities.