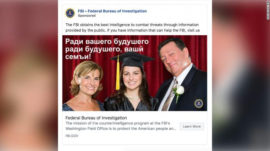 The FBI appears to be recruiting Russians living in and around the U.S. capital with awkwardly worded and grammatically incorrect Russian-language Facebook ads, CNN has reported.

Washington and Moscow have traded accusations of espionage, disinformation and other influence campaigns as relations between the powers have deteriorated to Cold War levels. An investigation into the 2016 U.S. presidential race found that the Russian state ran a hacking and propaganda operation to disrupt the election.

The still-active ads link to the website of the counterintelligence program at the FBI’s Washington field office, where a message in both English and Russian calls on potential recruits to “visit us in person.”

The field office website says its mission “is to protect the American people… through the detection, identification and neutralization of hostile foreign intelligence activities.”

“Russia has long been a counterintelligence threat to the U.S.,” Alan E. Kohler Jr., a special agent in charge of the Washington field office’s counterintelligence division, told CNN. Kohler Jr. added that the FBI will “continue to adapt our investigative and outreach techniques to counter the [Russian] threat.”

One of the stock-photo ads urges Russian speakers to come forward “for your future [and] for your family’s future,” but misspells three Russian words and misplaces a comma.

The other two ads call on potential recruits to “draw bridges” and “make your move.”