Final round of 8th corporate Fakel Festival opens in Sochi 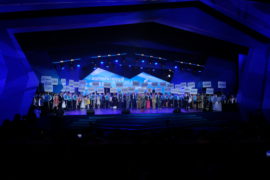 The opening ceremony for the final round of Gazprom’s 8th corporate Fakel Festival took place in Krasnaya Polyana, Sochi. The event brought together over 1,600 people representing 40 delegations from Russia, Belarus, Kyrgyzstan, and China. The Festival’s guests include delegations from Bolivia, France, Germany, Uzbekistan, and Vietnam.

Over the course of three days, contestants will present as many as 131 performances in such categories as Vocals, Vocal and Instrumental Ensembles, Choreography, Folk Music, and Circus and Performance Art. Individual performers and ensembles will compete in three age groups: 5 to 10, 11 to 16, and 17 and older. In addition, the Young Painter contest will be held at the Festival.

Alexey Miller, Chairman of the Gazprom Management Committee, sent a welcome message to the competition’s participants and guests. The message says:

“Our Festival has been going strong for 15 years. Over that time, it has blossomed into a major cultural project with an international reach. The Festival presents a formidable creative challenge for everyone who goes on stage. It also gives audiences a wonderful opportunity to learn about the cultural traditions of many Russian regions and other countries. It is heartening to watch such vastly different yet uniformly talented artists.”

“In my many years of sitting on the Festival’s jury, I have come to the conclusion that professional performers can learn a lot from the amateur artists and ensembles of Gazprom. Their success stems from exceptional artistry and creative freedom,” said Alexandra Permyakova, chair of the Festival’s jury and head of the Pyatnitsky State Russian Folk Choir.

The winners of the final round of Gazprom’s 8th corporate Fakel Festival will be announced at the awards ceremony on May 15. The Festival will conclude with a Gala Concert featuring the laureates on May 16.

In 2019, the final round of the Fakel Festival was organized by Gazprom Transgaz Krasnodar.