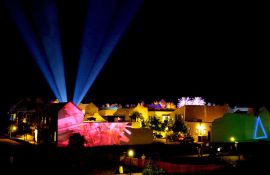 The moon will have some competition this summer as several cities around the globe gear up for their annual after dark light festivals. From Vancouver to Sydney, all eyes will be focused on the millions of colorful lights illuminating bridges, skyscrapers, cathedrals, rivers and more around the world. Here are five eye-popping light festivals that are sure to catch your attention this summer.

If there is one place in the world that’s ideal for projecting art, it just might be Alys Beach. Located in the Florida Panhandle about 80 miles east of Pensacola, this beachfront community is known for its whitewashed buildings, offering the perfect backdrop for artists to display their original light-projected works during Digital Graffiti, an annual light festival. Now in its tenth year, the upcoming event will showcase the works of more than a dozen artists from around the world selected for their use of digital technology to create boundary-pushing art. A team of judges will be on hand to select the best pieces, and winners will walk away with cash prizes. And unlike regular graffiti, no telltale marks will be left behind once the festival wraps.

From an illuminated dance floor perched high atop the Sydney Harbor Bridge that looks like it was ripped from the days of disco, to a menagerie of gigantic animal light sculptures at Taronga Zoo, there’s no object too big or too small to be lit up during Vivid Sydney. As was the case in previous years, the world’s largest festival of projected lights will take over the cityscape of Sydney for 23 nights of spectacular shows, concerts and other innovative events. New this year and already generating buzz: an array of colorful installations planned throughout Barangaroo, a hip neighborhood on the city’s northwestern edge, such as “Day in the Light,” an outdoor theater that blends light and sound resulting in a multidimensional experience.

When an event claims to be the largest light show in North America, visitors’ expectations are understandably sky high—but Illumination Vancouver International Summer Night Market won’t disappoint. Event organizers anticipate more than 300,000 people will attend this year’s massive festivities, which will stretch across 200,000 square feet of space and include live performances, more than 200 food and merchandise vendors, and, of course, plenty of bright lights. Each weekend will be dedicated to a specific theme (think music, dance or teddy bears—yes, there will be 30 giant, custom-made teddy bears scattered throughout the venue), but the highlight will be the 12 imaginative light displays that are sure to fill up Instagram feeds all summer long.

The Rouen Cathedral of Notre Dame in Rouen, France, is already a sight to behold, but it becomes even more breathtaking each summer when a kaleidoscopic light show uses projection mapping to cast colorful images onto its ancient facade. Called the Cathedral of Light, the annual event will focus on two themes this year: Joan of Arc and the Vikings. Combined with sound, the result is a nightly show that brings important aspects of French history to life in an unexpected way.

WaterFire, Providence, Rhode Island (May 19 and select Thursdays and Saturdays all summer)

While many light festivals around the world use cutting-edge technology, like mapped projections and LED displays, to garner ooohs and aaahs, WaterFire in Providence, Rhode Island, relies on good old-fashioned fire to light up the cityscape. Since 1994, this nightly event has drawn crowds by the thousands to the Moshassuck and Providence rivers, two arteries that snake through the city center. Floating atop the waterways are 86 anchored braziers (metal receptacles) filled with blazing piles of wood, which are replenished throughout the night by workers on boats. Just think of it as one continuous bonfire.