Culture | For Mark Twain, It Was Love At First Sight
RssMail

For Mark Twain, It Was Love At First Sight 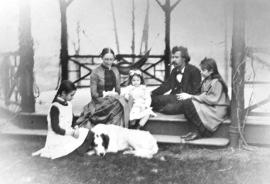 The year 2018 marks the 150th anniversary of one of the great courtships in American history, the wooing of an unenthusiastic 22-year-old Olivia Langdon by a completely smitten 32-year-old Samuel Langhorne Clemens, better known as Mark Twain.

As I first learned while visiting Twain’s hometown of Hannibal, Missouri in preparation for teaching “Adventures of Huckleberry Finn,” the contrasts between the two were indeed stark, and the prospects for their eventual union exceedingly poor. Olivia Langdon, known as Livy, was a thoroughly proper easterner, while Sam was a rugged man of the West. Livy came from a family that was rich and well-educated, while Sam had grown up poor and left school at age 12. She was thoroughly pious, while he was a man who knew how to smoke, drink and swear.

On Valentine’s Day, their story is a reminder of the true meaning of love. Despite many challenges, once united, they never gave up on each other and enjoyed a fulfilling 34 years of marriage.

Olivia Langdon was born in 1845 in Elmira, New York to a wealthy coal merchant. Her father, Jervis Langdon, was deeply religious but also highly progressive: He supported Elmira College, which had been founded in 1855 as one of the first in the U.S. to grant bachelor’s degrees to women. He was also an ardent abolitionist who served as a conductor on the Underground Railroad, which offered shelter and aid to escaped slaves from the South. He even offered sanctuary to a fugitive Frederick Douglass, one of America’s greatest abolitionists, who became a lifelong friend.

Her mother, also Olivia, was active in many civic organizations and served as a strong advocate for her children’s education. The younger Olivia suffered from a delicate constitution her whole life. As a teenager she was bedridden for two years after a fall on the ice.

Born in 1835 and raised on the Mississippi River in Hannibal, the young Samuel Clemens worked as a typesetter, a riverboat pilot, a miner and a writer. His first national literary success came in 1865 with “The Celebrated Jumping Frog of Calaveras County,” a story about a frog and a man who would bet on anything.

He soon moved into travel writing, filing dispatches from Hawaii (then the Sandwich Islands) before embarking in 1867 for Europe and the Middle East aboard the steamship Quaker City. Clemens would later cobble together his dispatches from the voyage into a book that became a 19th-century bestseller, “The Innocents Abroad.”

It was aboard the Quaker City that Clemens first laid eyes on a photograph of Livy. Her younger brother, Charles, who would later add to his father’s coal fortune, befriended Clemens on the voyage and showed him a picture of his sister. Clemens later claimed that it was love at first sight.

Wooing the ‘dearest girl in the world’

Back in the U.S., Clemens accepted an invitation from Charles to visit his family in Elmira. Within days of meeting Livy in 1868, he proposed marriage. She rebuffed him. Clemens later wrote,

“She said she never could or would love me – but she set herself the task of making a Christian of me. I said she would succeed, but that in the meantime, she would unwittingly dig a matrimonial pit and end by tumbling into it.”

Although Livy refused Sam’s proposal, she did offer to enter into a correspondence with him as “brother and sister.” He wrote to her the very next day and kept on writing for 17 months, a total of over 180 letters. One of them reads as follows:

“Livy dear, I have already mailed today’s letter, but I am so proud of my privilege of writing the dearest girl in the world whenever I please, that I must add a few lines if only to say I love you, Livy. For I do love you … , as the dew loves the flowers; the birds love the sunshine; as mothers love their first-born… .

P.S. – I have read this letter over and it is flippant and foolish and puppyish. I wish I had gone to bed when I got back, without writing. You said I must never tear up a letter after writing it to you and so I send it. Burn it, Livy, I did not think I was writing so clownishly and shabbily. I was in much too good a humor for sensible letter writing.”

Livy’s parents had good reason to be skeptical about the relatively uneducated and uncivilized Clemens, and they asked for references from his friends out west. As Clemens later reported, his friends did little to ease their mind, reporting that he was wild and godless, an unsettled rover “who got drunk oftener than was necessary.” But Sam had already told them as much, which seemed to confirm his honesty. Plus, he tried to reform himself, for a time giving up drinking and attending church regularly.

Despite the Langdons’ initial objections, Jervis Langdon took a liking to Sam, who soon won Livy’s heart. On the couple’s first outing together, they attended a reading by Charles Dickens, and in an effort to elevate her beau’s character, Livy began sending him copies of the The Innocents Abroad” was soon published, and Clemens rocketed to fame and fortune.

The Clemens’ life was not always happy, however. Soon after their marriage, Jervis Langdon died of stomach cancer, and their first child, a son, was born premature and died of diphtheria at 19 months. Years later, their daughter Susy died at age 24 of meningitis, and another daughter, Jean, died of epilepsy at 29. Only one daughter, Clara, survived. She married a musician and lived to age 88.

Clemens’s brilliance as a writer was nearly matched by his financial ineptitude. His enthusiasm for new technology led to investments in a money-losing typesetting machine. His publishing investments met initial success with the publication of the memoirs of Ulysses Grant, but soon failed. Eventually the family had to shutter their house and move to Europe. Finally he turned over control of his financial affairs to a Standard Oil baron who persuaded him to file bankruptcy before ensuring that his creditors were paid off.

Sam and Livy’s marriage was remarkable for its day, and perhaps any day. When they later built a mansion in Hartford, Connecticut – where they were next-door neighbors to another of the 19th century’s best-selling American novelists, Harriet Beecher Stowe – the deed was in Livy’s name. Clemens also transferred the copyrights to some of his works to Livy, to avoid seizure by creditors.

More importantly, she became proofreader and editor of all his manuscripts. Without her, he believed, his most important works, such as “Adventures of Huckleberry Finn,” would never have been written. Of her role he recalled,

“I never wrote a serious word until after I married Mrs. Clemens. She is solely responsible – to her should go all the credit – for any influence my subsequent work should exert. After my marriage, she edited everything I wrote.”

At home their children would listen as their mother read his stories. When she came to a passage that she thought needed more work, she would turn down the corner of the page. Clemens later claimed that he occasionally inserted passages to which he knew she would object simply to enjoy her reaction.

Sam and Livy remained deeply devoted to one another throughout their marriage, which ended only with Livy’s death in Italy in 1904 from heart failure. Clemens himself lived until 1910, devoting his last years to his autobiography. When the uncensored version was finally published – at his request, 100 years after his death – it sold unexpectedly well, making him the author of best-sellers in the 19th, 20th and 21st centuries.

After Livy’s death, Sam found it difficult to live. One of the chroniclers of their lifelong love affair finds perhaps his most poignant testimony in 1905’s “Eve’s Diary,” in which the character of Adam says at Eve’s graveside,

“Wheresoever she was, there was Eden.”

This article was originally published on The Conversation.