Culture | For This Russian Messianic Cult, Coronavirus Isolation Is a ‘Blessing’
RssMail

For This Russian Messianic Cult, Coronavirus Isolation Is a ‘Blessing’ 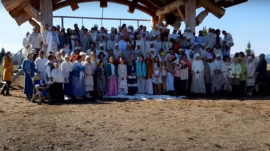 In the depths of the Siberian taiga a group of around a hundred people in white robes stand around a statue of an angel topped with a cross inside a circle. They sing and clasp each other’s hands, an unnerving scene in a world where millions are being forced to practice social distancing and self-isolation to curb the spread of the deadly coronavirus.

The worshippers are members of the Church of the Last Testament, a movement founded by Vissarion Christ the Teacher, whose thousands of followers believe he is the reincarnation of Jesus of Nazareth. In these uncertain times his disciples say they are seeing a new wave of interest in their way of living from around the world.

“People are searching for something and have become attracted to our lifestyle. They are looking for a way out of isolation and loneliness. Requests to join us have tripled since the start of the virus,” said Vadim Redkin, who used to be the drummer for a popular Russian rock band and now acts as Vissarion’s right-hand man and the group’s spokesperson.

“We get emails from Europe, South America and North America,” he added.

Former policeman Vissarion has just celebrated the 25th anniversary of his commune, making him one of the mystics who emerged in the early 90s after the fall of the Soviet Union to fill an ideological vacuum to have stood the test of time.

About 4,000 so-called “Vissarionites” live in 20 rural settlements in southern Siberia, with the most devoted group of around 300 on top of a remote hill they call Abode of Dawn.

The cult’s physical isolation from the rest of Russia means they are perhaps some of the only human settlements in the country whose lives have not changed during the pandemic, as they closed off their commune to outsiders when lockdown began.

However, members of the Church of the Last Testament do not fear the kind of Covid-19 outbreak seen in other tight-knit religious communes — most notably South Korea where hundreds of members of the secretive sect Shincheonji Church fell ill and became infection vectors for the rest of the country.

“Local police know that it is basically impossible to get to us, so they let us do our thing,” said Redkin.

While coronavirus-sparked existential crisis is playing a big role in attracting people to the commune, its members say talk about the pandemic being a way for nature to heal itself is also playing a part.

The Covid-19 outbreak has provoked debate about the impact of human activity on the planet. Over the past three months people, including celebrities, have shared fake images of animals returning to cities, under the caption “nature is healing,” arguing that there are some positives to the Covid-19 outbreak. Critics have warned against celebrating the environmental upsides of a pandemic that has already killed over 325,000 people.

“What people are saying now is something we all believed in 20 years ago when we moved here,” said Adrian Leon, a Cuban national who has been with the commune from its early days after he left a “pointless” existence as a teacher in Sweden.

“They are realizing that nature is sick and needs healing. Our lifestyle resonates with this,” Leon added.

The group’s core belief is a desire to live in self-sufficient harmony with nature, while adhering to traditional gender norms. It rejects most modern technology, alcohol and predicts worldwide disaster in the near future.

Russia’s Orthodox Church Sticks to Its Traditions Despite Coronavirus Threat

Benjamin Kaufmann, an Austrian whose life in Europe has been “rocked” by the coronavirus first came across Vissarion in a Vice News documentary. He told The Moscow Times that the cult’s environmentally friendly and community-based message attracts him.

“First I thought ‘ah … the next guy, who believes he’s Jesus’ … but I was curious and watched it. Then I was really surprised and thought ‘wow, that looks like the ideal style of living’,” Kaufmann said via Facebook.

Mariam, a 27-year-old accountant from New Jersey echoed this sentiment and said she is planning to move to Siberia “once the borders open.”

Phillips Stevens, a retired anthropology professor at the University of Buffalo who specializes in cults and alternative religions, expects the coronavirus to prompt a rise in fringe ideas and religions.

“Cults develop all the time, but far more frequently — and far more visibly — during times of general uncertainty and anxiety like the pandemic. In times of social stress people want certainty, hope, promise and some sense of control in a time of apparent unpredictability and personal loss,” he said.

“Skepticism declines and people are more willing to accept unusual claims without evidence,” he added.

The pandemic has already led to an increase in recruitment activity among cults and healers in Russia, said anti-cult activist and Professor at St. Tikhon’s Orthodox University Aleksandr Dvorkin, with many offering protection and salvation from the coronavirus.

One example is the return of Anatoly Kashpirovsky, a self-styled psychic healer who enjoyed popularity in the late 80s and is back on YouTube offering guidance as the coronavirus spreads.

“In times when confusion reigns people are vulnerable to manipulation, for some the idea of running away and hiding in the forest might seem like a reasonable option” Dvorkin said.

Russia has seen a rise in crackdowns against non-Orthodox Christian denominations across the country, with over 300 Jehovah’s Witnesses charged or convicted since Russian officials branded the group as “extremist.”

Authorities have mostly ignored the homegrown and secluded Church of the Last Testament over the past decade. However, changed in February of this year, when police searched the Abode of Dawn, reportedly searching for evidence of corruption and sexual assault in the commune.

Lockdown, however, has put a temporary stop to these searches, Redkin said.

“Quarantine and isolation have been a blessing for us.”