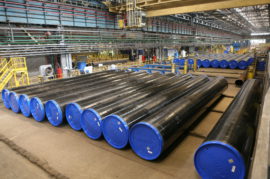 The Gazprom Board of Directors took note of the information on the Company’s procurement policies with regard to working with domestic producers to meet Gazprom’s strategic goals for 2019.

It was stressed that Gazprom’s procurement policies are in full accord with the current Russian legislation and internal regulatory documents.

All things being equal, Gazprom prioritizes goods and services of Russian producers and contractors, which corresponds to the norms of Russian law. This includes, in particular, machinery, industrial and metallurgical products, innovative building materials, and equipment.

Roadmaps that are signed between the Company and Russian regions are among the most effective tools in this process. Under these documents, the parties cooperate on using high-tech products (including import-substituting products) made by Russian companies for the needs of Gazprom: constituent entities of the Russian Federation make lists of their solutions that may be of interest to the Company. Products that meet Gazprom’s high standards and have been certified in accordance with the Company’s requirements are accepted for use at the Company’s facilities. This enables manufacturers to take part in Gazprom’s procurement process. As of now, Gazprom has signed roadmaps with 22 constituent entities of the Russian Federation.

Products manufactured by Russian companies are widely used in Gazprom’s strategic projects. This year, for example, key logistical resources for the priority projects of the investment program will be supplied by 170 Russian companies. Over a half of these companies fall into the category of small and medium-sized enterprises.

Gazprom is going to continue its systematic work on expanding its cooperation with Russian industrial enterprises.