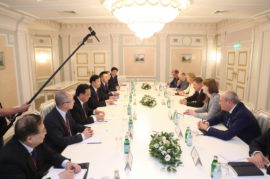 In October 2017, Gazprom, CNPC, and KazMunayGas signed the Memorandum of Understanding to join efforts in developing the production and sales infrastructure for natural gas as a vehicle fuel within the Europe – China international transport corridor.

In July 2017, Gazprom and CNPC inked the Supplementary Agreement to the Sales and Purchase Agreement for gas to be supplied via the eastern route signed in 2014.