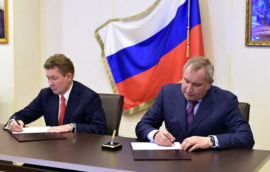 The event was attended by heads of relevant subdivisions and subsidiaries of the Company and the state corporation.

The cooperation between Gazprom and Roscosmos is strategic in nature. Specifically, Russia’s Unified Gas Supply System operates with the help of about 500 gas compressor units developed by RPA Iskra (part of Roscosmos).

The parties continue to collaborate on expanding Gazprom’s satellite constellation. In 2019, Roscosmos plans to launch the Yamal-601 satellite with a view to providing the Company’s facilities and third-party users with high-speed data transmission channels and satellite communications. Yamal-601 will have the largest bandwidth among Russian communications satellites. In addition, Roscosmos and Gazprom are considering the former’s potential participation in the Company’s project for setting up a spacecraft assembly facility in the Moscow Region.

Much emphasis is placed on the development of import-substituting equipment for Gazprom. Corrosion-resistant downhole equipment components produced by Roscosmos have been successfully tested at one of the Company’s facilities. The corporation is also manufacturing equipment prototypes for subsea hydrocarbon production systems.

Participants in the meeting emphasized the considerable potential for enhancing cooperation and using Roscosmos’s hi-tech solutions to fulfill Gazprom’s objectives.

Alexey Miller and Dmitry Rogozin signed an updated roadmap for Roscosmos to develop and launch the production of advanced equipment, including import-substituting products, for the needs of Gazprom. The document was extended until 2022.

This collaboration is aimed at creating technological equipment for offshore hydrocarbon production, compressor and power supply equipment, and gas processing and liquefaction equipment. The new version of the roadmap includes an expanded list of works in priority areas such as subsea hydrocarbon production and liquefied natural gas production. It also provides for the development of equipment for transporting helium by rail.

In accordance with the roadmap, its implementation will be funded primarily by Roscosmos, with potential financial participation from Gazprom in several areas.

At the end of the meeting, the relevant subdivisions and subsidiaries were instructed to undertake measures in connection with the implementation of the updated roadmap.

Gazprom carries out systematic work in the areas of technological development and import substitution, paying particular attention to the wide use of sci-tech potential of Russian companies, including the military-industrial complex.

As a result of these efforts, Russian manufacturers have launched production of over 1,500 types of modern import-substituting products for the gas industry. Some of these items were presented at the 8th St. Petersburg International Gas Forum in October 2018.

In October 2017, Gazprom and Roscosmos signed a roadmap to further their cooperation in import substitution for the period up to 2020.

In October 2018, the two companies signed a cooperation agreement as part of Gazprom’s project for setting up a spacecraft assembly facility in the Moscow Region.