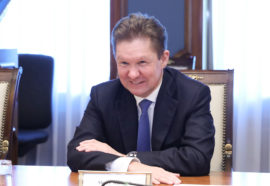 The parties discussed their ongoing and future cooperation, in particular the interaction in the field of underground gas storage (UGS) in Germany. It was noted that the joint project for the development of the Katharina UGS facility is in the active investment phase, with onshore structures built to completion. The facility has six operating caverns with the total working gas volume of 316 million cubic meters. A seventh cavern is under construction.

In addition, the meeting participants reviewed issues related to sci-tech cooperation between Gazprom and VNG.

VNG is engaged in natural gas imports, underground storage and consumer supplies in Germany’s eastern federal states and in Berlin.

Gazprom and VNG are working together on the Katharina UGS facility, a joint project implemented on a parity basis. When the facility reaches its design capacity in 2025, it will include 12 caverns with the working gas volume of some 650 million cubic meters and the daily withdrawal rate of 26 million cubic meters.