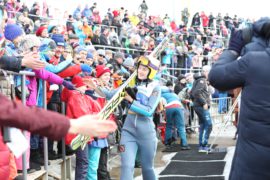 On March 23–24, the finals of the Ski Jumping World Cup for ladies were held in Tchaikovsky, Perm Territory, with Gazprom as a general sponsor.

Based on qualification round results, 42 female athletes, including eight Russians, made it to the starting line. Norway’s Maren Lundby won a clear lead on the HS140 hill. She secured her victory with the jumps of 128 meters and 137.5 meters. The silver went to Germany’s Juliane Seyfarth, who was behind the leader by 12.9 points, while 19-year-old Nika Kriznar from Slovenia won the bronze.

“Ski jumping is a very beautiful sport. The athletic performances are breathtaking and awe-inspiring,” said Sergey Suslikov, Director General of Gazprom Transgaz Tchaikovsky. “Gazprom has always been actively involved in the development of sports, supported aspiring athletes, and made a substantial contribution to national health. We also pay great attention to sports at our company. We support those of our employees who lead a healthy lifestyle, we arrange various competitions both among gas workers and their family members, and we do our best to engage as many people as possible in these activities.”

Russia Tells UN It Sent Home Over Half of North Korean Workers in 201894% of Russians Are Concerned About the Environment, Poll Says