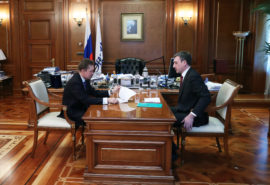 A working meeting between Alexey Miller, Chairman of the Gazprom Management Committee, and Vasily Orlov, Governor of the Amur Region, took place today in Moscow.

It was noted that the Amur Region is an area of strategic interest for Gazprom, as the Power of Siberia gas pipeline passes through its territory. The pipeline will start delivering gas supplies from Russia to China on December 1, 2019. The construction of the pipeline’s linear part from the Chayandinskoye field in Yakutia to the border with China is mostly complete. The under-construction Atamanskaya compressor station near the border is currently at 74 per cent readiness. The Amur Gas Processing Plant (GPP) is being built, with the core heavy and large equipment of its first start-up complex already installed.

The meeting participants discussed the outlook for gas infrastructure expansion in the Amur Region. It was stressed that the commissioning of the Power of Siberia gas pipeline will make it possible to supply pipeline gas to the area. Today, Gazprom is building a pipeline branch to connect a gas distribution station (GDS) to the town of Tsiolkovsky (renamed from Uglegorsk in 2015). The design of an inter-settlement gas pipeline running from the GDS in Tsiolkovsky to the Vostochny Cosmodrome has been finalized. The Company has received an authorization from the state expertise agency and is planning to start building the pipeline shortly.

In addition, Gazprom has completed the design and estimate documentation for an inter-settlement gas pipeline towards the town of Svobodny and is designing a local pipeline branch and the Svobodny GDS.

The parties also discussed the implementation of the Gazprom for Children program. The Company is making preparations for the construction of five regional sports and health centers: two in the city of Blagoveshchensk and one each in the town of Tynda, the settlement of Magdagachi, Magdagachinsky District, and the village of Tambovka, Tambovsky District.

Gazprom and the Government of the Amur Region signed the Cooperation Agreement.

The Amur Region is not receiving pipeline natural gas. Gazprom has developed a draft program for gas supply and gas infrastructure expansion in the region until 2026. The document is pending approval by the Government of the Amur Region.

As part of the Gazprom for Children program, 15 regional school stadiums and multi-purpose sports grounds were built in 2017 and 2018 in such cities and towns as Blagoveshchensk, Shimanovsk, Tynda and Zeya, as well as in villages in the Belogorsky, Blagoveshchensky, Bureysky, Magdagachinsky, Mazanovsky, Oktyabrsky, Tyndinsky and Zavitinsky districts.