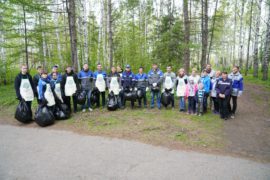 All 14 regions where Gazprom Transgaz Tomsk is present joined the national environmental cleanup. For instance, the company’s employees cleaned public parks in Barabinsk (Novosibirsk Region) and Yuzhno-Sakhalinsk, and also released fingerlings of chum salmon into the Gur River in the Khabarovsk Territory, while the employees of the Yurginskoye Gas Pipeline Operation Center made birdhouses. The staff of the Primorskoye Gas Pipeline Operation Center continued to plant trees on Gas Workers’ Avenue in the arboretum of the Gornotaezhnaya Station. A range of activities were implemented to clean territories and plant trees.

Within the May-June period, the employees of Gazprom Transgaz Tomsk cleaned over 200 hectares of land, collecting about 130 tons of waste, and planted over 20,000 trees. For the results achieved during the cleanup action, its organizers – the Vernadsky Nongovernmental Ecological Foundation and the All-Russian Society for Nature Protection – awarded the company with a diploma and a trophy cup for commitment, initiative and a considerable contribution to environmental protection.

Gazprom Transgaz Tomsk is a wholly-owned subsidiary of Gazprom responsible for the construction and operation of gas transmission systems in 14 regions of Siberia and the Russian Far East. The company operates more than 9,500 kilometers of oil and gas trunklines and transmits over 20 billion cubic meters of gas annually.

In 2012, the company was appointed as the customer in the Power of Siberia gas trunkline investment project.

The company has upward of 8,000 employees.