Get Lost Inside These Golden Spires Transforming the Sackler Pavilion 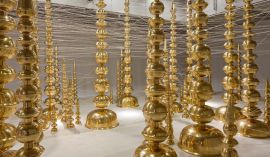 The tall, spindly golden spires at many Eastern temples, mosques and churches are being replicated in the pavilion of the Smithsonian’s Arthur M. Sackler Gallery in Washington D.C.

Nearly 50 spires of various heights—from one to 13 feet—are connected by a maze of thread in the monumental installation by the acclaimed contemporary Indian artist Subodh Gupta. Staffers who assembled the towers of the work titled Terminal spent several days up and down ladders, weaving the intricate web connecting the gleaming spires with cotton thread.

The 2010 sculpture was erected twice before—in Scotland and at the Savannah College of Art and Design. But the Washington iteration—one of five exhibits marking the reopening of the Smithsonian’s Freer Gallery of Art and the Arthur M. Sackler Gallery after nearly two years being closed for renovation—may be its largest.

It also allows visitors to walk through the work, between the spires and beneath the canopy that connects them—in an echo of other new immersive works in the Sackler galleries below ground.

Like a lot of work by the Indian sculptor, Terminal involves the reuse and recontextualization of household items, says Carol Huh, the Freer and Sackler curator for contemporary art, who led a team to erect the work.

“A large body of his sculptural escalations have riffed on or used found objects that tend to be vessels, or domestic containers of some types, stacked or arranged in some way,” Huh says, during a break of threading the sculpture. “These, however, are not. They were specifically fabricated for the work. They are not found objects. But they are based on the form of vessels, stacked and inverted.”

The hand-hammered brass bowls that are connected by the mouth create a series of bulbs, whose stems are attached and stacked to create the spires.

Previous works by Gupta have welded hundreds of pots and pans into single, metal clouds of familiar materials; another collection of aluminum containers and utensils formed a monumental skull. His 2014 Imperial Metal is a piece of construction rebar plated in 24-karat gold. Originally a painter, Gupta, 53, made his first sculpture by using a household stool, something he recognized as a “Readymade,” in the tradition of Marcel Duchamp.

His use of familiar objects in surprising new ways has led to him being called “the Damien Hirst of New Delhi.”

For Terminal, Huh says, Gupta uses “a form that somewhat recalls the spires you find on the top of many structures—not just in India, but in different parts of the Middle East, especially religious structures.”

Along with the spires on temples, churches and mosques are usually symbols to designate the affiliation, she says.

“What he does here is he takes that reminiscent form and does his own interpretation of it, morphed with his interest in the vessel form, but then makes them generic: No symbols.”

And, she says, “by varying their height and clustering them, you get a real sense of going through a flyover of a dense city, where they are all at different heights and different scales.”

It’s similar to where Gupta, born in rural Northern India, works in New Delhi, Huh says. “There’s a kind of density, there is a variety of structures and also a long history of religious diversity that he’s surrounded by and he lives in and perhaps is becoming more challenging.”

The threads laced between the spires represent their innate inter-connectedness.

“Even within the context of a lot of religious diversity, there are certain shared elements,” Huh says. “Perhaps the thread for him is about the connections between all of this diversity. Common elements that are all linked within this one space, within this one community.”

The crisscross nature of the lines in the work recall the jangled matrix of electrical and phone lines in a city as well, Huh says.

Finally, there is a structural consideration. “When you first set the towers you think, gosh they’re a little precarious, because they’re so tall and narrow,” she says. “But once you start threading them together, you realize there’s a sort of stability that’s created by all of this push and pull. So there’s a practical aspect to it.”

Gupta will be on hand to talk about the work himself on Sunday, October 15, as part of the Freer|Sackler IlluminAsia Festival coinciding with the museums’ reopening.

Terminal is the latest exhibit of contemporary Asian art in the series it called Perspectives. Previous artists presented include Yayoi Kusama, Anish Kapoor, Ai Weiwei and Michael Joo. The program now being called Sackler Contemporary to mark the 30th anniversary of the Sackler opening in 1987 alongside the Freer, the Smithsonian’s oldest art museum.

As such, Terminal is the newest work along the new exhibits at the complex featuring Asian art that in some cases dates back millennia.

Perspectives: Subodh Gupta opens October 14 in the pavilion at the Arthur M. Sackler Gallery in Washington, D.C. and runs through June 24, 2018.