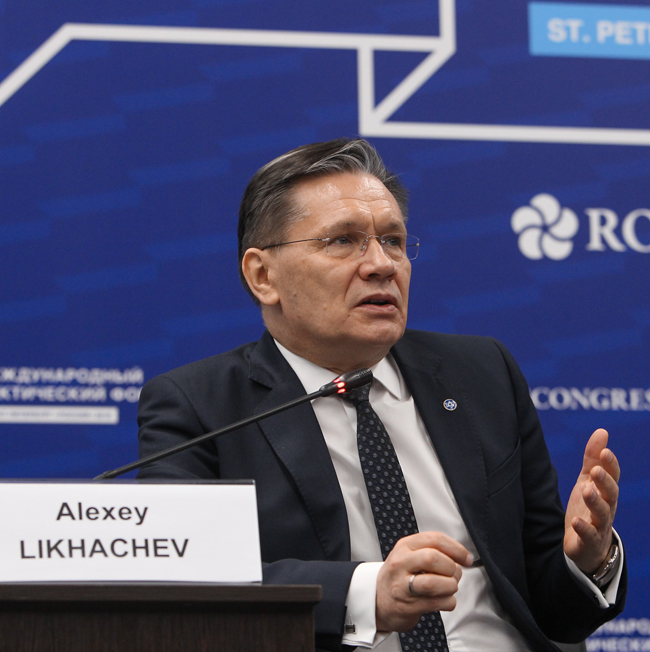 On April 9, 2019 in Saint-Petersburg the Director General of ROSATOM took part in the panel section “The Northern Sea Route – The Key to the Development of the Russian Arctic” which was held in the framework of the 5th International Arctic Forum “The Arctic – Territory of Dialogue”. 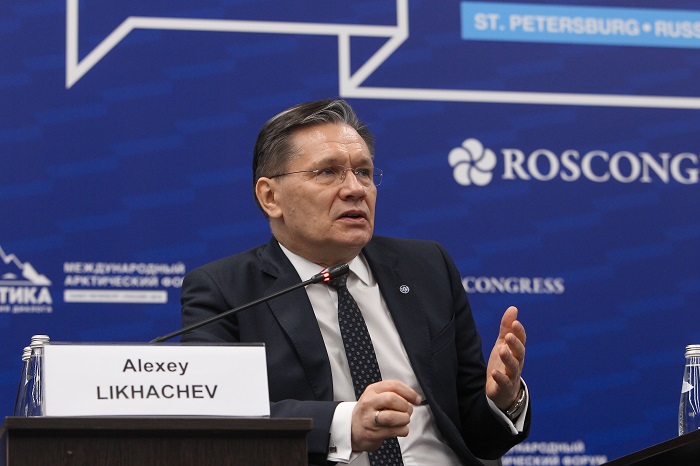 Chairman of the Council of the Federation of the Russian Federation Committee on Foreign Affairs; Dmitry Artyukhov, Governor of Yamalo-Nenets Autonomous Region; Alexander Tsybulskiy, Governor of Nenets Autonomous Region; Alexander Drozdenko, Governor of Leningrad Region; Igor Orlov, Governor of Arkhangelsk Region; Leonid Mikhelson, Chairman of the Management Board, Member of the Board of Directors, NOVATEK; Sergey Frank, Chief Executive Officer, Chairman of the Executive Board, Sovcomflot; Park Heung Kyeong, Ambassador for Arctic Affairs, Ministry of Foreign Affairs of the Republic of Korea; and others also participated in the section which was moderated by Dmitry Schugorev, Anchor, Russia 24 TV Channel.

The section participants discussed key approaches to the development of the Northern Sea Route (NSR) as a large-scale transportation and logistics project of national scale. In particular, the discussion focused on finding solutions to the target of NSR development formulated by President of the Russian Federation Vladimir Putin: bring cargo traffic via the Arctic route up to 80 million tons by 2024.

For instance, Maxim Akimov noted that today the general perception of the Arctic was qualitatively changing. “Understanding and confidence that it is most demanded and dynamically developing region of the country and the world are growing. The drivers of the Arctic changes are, on the one hand, resource projects and, on the other hand, are the programs of building nuclear ice-breaking fleet and modernization of seaport and navigation infrastructure which support their dynamics,” he said. He noted the importance of the growth of transport capabilities and involvement of transit freight for NSR development.

Alexei Likhachev said that adoption of the law on giving ROSATOM the functions of the sole infrastructure operator of the Northern Sea Route has become one of the important results of the last year for the state-owned corporation. The procedure of division of the authorities between the Ministry of Transport and ROSATOM was over and now the management of NSR is built on the principle of “two keys”: Mintrans is responsible for statutory regulation and ROSATOM is responsible for commerce and economy. He also emphasized that ROSATOM is entitled with the responsibility for implementation of the Federal Project “The Northern Sea Route” which is part of the Integrated Plan of modernization and broadening the route infrastructure until 2024. Owing to the nuclear icebreakers being built and planned infrastructure development until 2024, the cargo traffic via most northern marine transportation route of the country may be even 92.6 million tons. Likhachev called this level “an intermediate finish” forecasting that in the 30’s the cargo traffic may be brought up to the level of 110-120 million tons a year.

He also mentioned the work to start construction of a new generation icebreaker Leader at Zvezda shipyard in Far East. The icebreaker will have power capacity of 1200 MW, i.e. twice more than those built today. In future the product line of the Leaders will be broadened up to three icebreakers. “We plan to use the Leaders, first of all, in the eastern area of NSR for shipments to China, Japan and South Korea. Also, I would like to note that we, for the first time, plan to use the principle of mixed financing in building new universal icebreakers: the federal budget allocated only 50% of needed funds,” Likhachev said.

Summing up, Likhachev noted that the creation of the NSR infrastructure operator is a logical step in the current stage of the Arctic development where more and more projects of extraction of resources appear. “The creation of the operator will allow, at last, to work as “one contact”; it will join efforts of the state and the business in more effective use of such important transportation route as the Northern Sea Route,” he said.

ROSATOM is a partner of 5th International Arctic Forum “The Arctic – Territory of Dialogue”. It main topic is “The Arctic. Ocean of Opportunities”. The Forum closes on April 10.