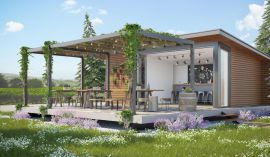 Imagine sitting in a 6,100-year-old mountain vineyard in Armenia’s Vayots Dzor province, sipping a glass of red wine with subtle hints of juniper. Nearby is a plate of cheese made from the milk of a bezoar goat, drizzled with local honey and paired with perfectly ripe apricots, while the man beside your table—the one who’s pouring himself a glass of wine to join you—is both the vintner and the farmer responsible for this incredible spread. For four generations, his family has been tending this vineyard in Armenia’s southeastern corner, one of the oldest wine producing regions in the world.

Creating experiences like this is the aim of Farm-to-Bottle, a joint crowdfunding project between Semina Consulting (a viticulture consulting firm devoted to promoting and developing the country’s wine region) and the philanthropic non-profit ONEArmenia, which hopes to create a new wave of local enotourism in southeastern Armenia and empower small family farmers to thrive there.

“Normally, the link between the grape grower and the consumers is lost,” says Vahe Keushguerian, a local wine expert and the head of Semina Consulting—particularly in Armenia where, until recently, many grape growers were selling their crops to larger corporations for a fraction of the going price, and keeping only a small portion of the fruit to craft wine for themselves. “With Farm-to-Bottle, we’re working to change that.” A large portion of the campaign’s $61,515 in fundraising will go toward building “WineCubes,” compact wine-tasting rooms that can be placed right in the vineyards. More intimate than a typical tasting room, the cubes are intended for grape farmers who don’t yet have their own customer-friendly wineries, providing them the opportunity to interact with their consumers directly. Each one will feature an open-air patio lined with bench-style tables, a tasting bar with stool seating and a restroom—all perched on a concrete platform with timber-clad walls. Depending on the farmer, says Keushguerian, “tastings may be accompanied by a few snacks or even a full sit-down meal.” Armenia’s DZ Architectural Design Studio is responsible for both the design and building of each “cube,” devising simple venues that are affordable, easily transported and that blend seamlessly with their surrounds, showcasing the vineyards.

“The concept of a WineCube is totally new,” says Sarah Fountain, ONEArmenia’s Content and Communications Manager, and one that the joint organizations hope to expand throughout the region. For now, they’re starting with just three cubes: two that will go to small, local farmers who will then be able to make and sell their own wines, says Keushguerian, and a third erected in the province’s Getap Village, which will house a few quality Armenian wine brands like Koor, Zabel and Sarduri.

The project organizers hope these new facilities will accelerate interest in Armenia’s Vayots Dzor region, which has already been experiencing a “wine renaissance” the last several years, stimulated by the excavation of the world’s oldest winery—the Areni-1 Cave. This archaeological site, which is open to private tours “reestablished Armenia as one of the birthplaces of viticulture,” says Keushguerian, “which in turn increased tourism.” Today, the province is home to more than a dozen wine producers and hundreds of farmers maintaining small vineyard plots. While there is no winery currently at the Areni-1 Cave, Armenia’s Ministry of Culture recently announced plans to rent out the site and several surrounding caves as tourism venues—though exactly what plans lie ahead for these sites are still under review.

Vayots Dzor itself is mountainous and dry, with high-altitude vineyards of rich, volcanic soil and coarse sediment perfect for producing such exotic-sounding grape varietals as kangun, haghtanak and voskehat. The wines range from cherry reds with hints of blackberry and clove, to dry whites that taste of peach and apricot. Relics of centuries-old monasteries dot the province’s foothills and spring up from gorges, while mouflon—a type of wild sheep—and bezoar goat roam the cliffsides among wild pear and plum trees. There are also tiny mountain villages nearby, like Jermuk, home to picturesque waterfalls and soothing mineral hot springs, all drawing visitors to the sparsely-populated region.

Despite the local allure, Vayots Dzor’s generational farmers have largely been getting lost in the mix—overshadowed by the region’s commercial wine producers. For years, these farmers have been manually destemming, crushing and fermenting the grapes in open top vessels, then aging them in cellars within clay amphora, a type of two-arm, narrow neck vessel. But Farm-to-Bottle hopes to introduce these farmers to new technologies, like small tanks, temperature control and up-to-date equipment. “Farm-to-Bottle is like a small-wine company incubator,” says Aimee Keushguerian, Semina’s Brand Manager (as well as Vahe’s daughter). “While these farmers are tending vineyards passed down for generations, they have never explored making their wine with modern technology.” The firm hopes to preserve the Vayots Dzor’s unique winemaking traditions while helping to make the region competitive in the global wine trade.

Along with WineCubes, the money raised in the Farm-to-Bottle campaign will go toward producing 2,000 bottles of wine for each of the first two farmers at Semina’s own facility (as the project grows, it plans to bring on more farmers), which the farmers will sell at their vineyard and distribute to local markets and wine bars in Armenia’s capital city, Yerevan. Together with Armenia’s EVN Wine Academy—established together with Semina Consulting in 2014—Semina will also teach the farmers how to grow quality grapes on their established vines and market their wines, as well as provide hospitality training for interacting with vineyard visitors. In this development structure, the farmers will pay back Farm-to-Bottle at cost after their training and two additional years of production support. By the end of the program, the hope is that they will have established their own businesses, “producing fine wines with Armenian indigenous grapes,” says Aimee. The WineCubes themselves will be rotated to a new vineyard after farmers are ready to build their own wineries, or the farmers can purchase the mobile tasting room, funding the construction of another.

The firm expects that travelers will be able to visit Armenia’s first WineCubes and purchase inexpensive ($5-7) bottles of wine straight from the vineyards of Armenia’s Vayots Dzor as early as June 2018.