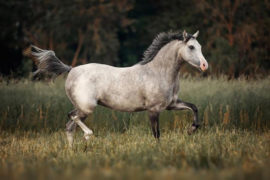 On a chilly April morning in 2019, four North Korean men arrived unannounced at the Verona stud farm in Moscow’s elite suburb of Rublyovka in search of a perfect white Welsh pony for the son of their Supreme Leader Kim Jong-Un.

They settled on Sansa, an exceptional three-year-old that had won awards across Russia.

“One of the men, a jockey, took a ride and was sold right away. He called her ‘a sweetie’,” Verona’s director Maria Muraveynik told The Moscow Times in an interview in her medal- and statuette-filled office.

Russia supports the UN Security Council sanctions on North Korea. However, the export of horses and other livestock is not prohibited.

Horses have great symbolic power in North Korean mythology and political culture, culminating in Chollima, a mythical winged horse that has inspired statues in the country’s cities and appeared on currency and postage stamps.

Last year, Kim’s love of horses received worldwide attention, when he twice rode a white stallion up the country’s sacred Mount Paektu, a move experts said was steeped in symbolism.

Maria Andreeyeva, director of Moscow-based horse logistics agency Gandicap, said she immediately recognized the animal as an Orlov Trotter she had helped to fly to the country in 2015.

Netherlands-based North Korea historian Casper van der Veen told The Moscow Times that by riding a white horse Kim was cultivating a domestic image of closeness to his grandfather and the country’s founder Kim Il Sung — who is seen as a godlike figure.

“Kim Il Sung in his memoirs described a pure white horse as his trusted ally and friend during the Korean revolution,” Van der Veen said.

Igor Gershtanskiy, 65, a veteran Russian horse breeder and Moscow Stud Farm No. 1’s head of sales, said that while he has been working with North Korean “since the 90s,” cooperation has increased over the past three years, with the farm selling six Orlov Trotters since 2017.

According to customs data first reported by South Korea-based outlet NK News, Russia exported a total of 12 horses and ponies worth just over $75,000 to North Korea in 2019 alone.

The deals were finalized in late October 2019, and organized by Andreeyeva. She told The Moscow Times that she was approached by the North Korean Embassy to coordinate the purchase of the animals with private and state-run stud farms.

“Once all the papers were ready, I chartered a plane for the horses to fly from Moscow’s Sheremetyevo airport straight to Pyongyang,” she said.

Andreeyeva added that the North Korean scouts have, over the years, spent a lot of time and resources travelling around Russia looking for the “best white horses” they can find. According to Russian federal customs service data viewed by The Moscow Times, North Korea, one of the world’s poorest countries, imported 138 horses at a cost of $584,302 between 2010 and 2019.

“For this particular purchase they went to six different stables,” Andreeyeva said, adding that the North Koreans were “tough customers” because they “do their research.”

Experts say the horses are not just being used for propaganda purposes in North Korea, they are also gifts for loyal members of Kim’s inner circle. As the country finds itself under increased international isolation, presents including luxury goods from the West have been harder to find, and Russian thoroughbred horses can be used as substitutes.

For Gershtanskiy, the renewed interest in Orlov Trotters is “flattering.”

“My horses look healthy in the pictures that I have seen of them in North Korea and that is all that matters to me. If they are being used for propaganda, that means they look good, right?”