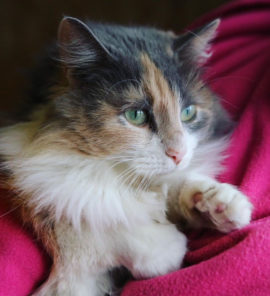 When an older man became ill and was quarantined, volunteers brought food and medicine, but no one could care for his two dogs. So, for a month, a distant relative became one of Russia’s growing ranks of animal volunteers.

Volunteer organizations to aid animals have existed in Russia for a long time, but this year they changed to meet the new demands of the coronavirus lock-down.

Yekaterina Posysaeva is a co-owner of a veterinary clinic in Moscow. At the end of March, Yekaterina and other volunteers got together to discuss how to help pet owners who were quarantined or hospitalized. They considered using part of the clinic to house them, but soon more than 350 people offered to foster dogs, cats, and even parrots and turtles.

Many owners didn’t need to arrange a foster home for their pets, but they needed someone to buy food and walk their dogs. The process was completely no-contact: the owner tied the dog’s leash to front door, the volunteer picked up the dog for a walk, and then tied the dog back to the door handle and rang the doorbell to let the owner know the pet was back home.

Another new project called Happiness With Home Delivery was started in Moscow when Margarita Kondratyeva saw videos on social networks of empty animal shelters in other countries. She thought quarantined people in Moscow might also want to adopt a pet. So she gathered a group of volunteers, contacted shelters and other organizations, and organized an online marathon in April. Out of 150 dogs and cats, about 90 found new homes, and only seven pets were returned.

Nika Mogilevskaya, who has been in animal protection for more than six years, said they placed another 50 animals the next month, but “it’s hard to say whether it will be in demand,” once the quarantine ends.

Anna Feldman has long been concerned about Moscow’s strays. In 2014, she founded Kotospas, a helpline for cats trapped in apartment building basements, and then Cats in the City, a hotline people could call with questions about domestic and stray cats. In early April 2020, she started #NAKORMI (#GiveThemFood) to help feed strays.

“The #NAKORMI project just appeared by itself,” Anna Feldman told The Moscow Times. “People who could no longer feed homeless animals began to write to us, and we realized that it was a problem. Before quarantine people fed animals near their offices, in parks and industrial areas. During quarantine most of these places were closed.”

Volunteers in each district fed strays near them, sometimes buying the food themselves. Even as some people go back to work, help is still needed.

Galina Shlyakhova is the founder and head of the Social Veterinary Center, a non-profit organization that launched a network of veterinary clinics for animals in need. The organization has clinics in Moscow, Gelendzhik, Krasnodar, and Lipetsk, all working together on several projects, including one for crowdfunding started recently called “Anti-Crisis Kindness.”

Social veterinary centers help when there are emergencies and difficult cases, usually injuries or dangerous diseases like oncology. Sometimes animal shelters ask for help when they don’t have the necessary equipment.

“We help homeless animals and pets whose owners can’t pay a bill in full. Sometimes we take care of animals free of charge, but in all the years we’ve been working, no one has ever taken advantage of us,” Galina Shlyakhova said.

The organization runs a variety of projects, like rebuilding animal shelters, which in Russia are just fenced-off areas, into comfortable and inviting places where potential adopters can get to know the animals.

Small Russian towns may have fewer organizations, but there is no dearth of volunteers. In Lipetsk, the Veles group aids homeless animals. Marina Zvyagina is one of its members.

“We are just people who love animals and try to help them as best we can. We take them to the vet, operate, sterilize, vaccinate homeless dogs and cats — and try to find homes for them,” Zvyagina told The Moscow Times. So far they have helped several thousand animals.

During the quarantine, they continued the usual work and began to walk dogs for pensioners who had to stay inside.

Margarita Levakova is the head of Druzhok animal shelter, in Staraya Russa, Novgorod region. The shelter, which houses about 60 dogs, didn’t get an influx of pets people couldn’t care for, but it did have a new problem during the period of quarantine.

“We used to feed dogs with leftover food from cafes and restaurants, but now we have to cook food for them and use dry kibble. Volunteers, shops, residents and even a deputy from the local city assembly have been helping us,” Levakova told The Moscow Times.

In Tula, animal volunteer Yana Zvereva doesn’t have to worry about a shelter.

“We don`t have one. Volunteers use their houses as foster homes. For us, almost nothing changed during the pandemic, although we got fewer donations and have a harder time adopting out our animals,” Zvereva said.

Zvereva said that through social media they’ve placed about 500 cats and dogs since they began work in 2011.

Despite all the problems, Yana continues to help animals because, as Antoine de Saint-Exupery wrote: “You become responsible forever, for what you have tamed.”