Culture | In the Future, Will We Be Growing Fruit in Home Bioreactors?
RssMail

In the Future, Will We Be Growing Fruit in Home Bioreactors? 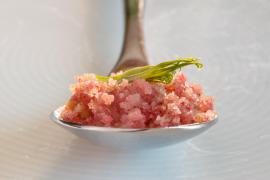 In the dead of winter, fresh fruit can be expensive, with soft fruits like berries coming to the United States from Central and South America—sometimes even being flown in. But what if you could grow your own fruit right at home, getting the health benefits of impossible-to-cultivate berries or out-of-season favorites without having to eat pricy imported produce or take supplements?

That’s the question that drove Lauri Reuter and his colleagues at the state-run tech company VTT Technical Research Centre of Finland to start working on a project that totally reimagines how we think of growing food. His team is working on what they’re calling a “home bioreactor”—a countertop appliance that can, in theory, fill the same space in your life as a Nespresso machine does for coffee, but with fresh berry cells, including some from plants that would be impossible to cultivate using traditional means because of their adaptations to life in hostile places like the Arctic.

The idea got started when Reuter started working in a VTT lab that cultivates plant cell lines for industrial use in things like cosmetics and medicine. The berry cells contain chemical compounds that lotion-makers and health professionals rely on: Finnish company Lumene relies on the beneficial properties of cultivated cloudberry cells for some of its skin products, and a common cancer drug, paclitaxel, is derived from the cells of the Pacific Yew. In this application, cell culture helps produce enough of the berry and leaf cells to supply the market.  When he found out his colleagues were working on lingonberry, strawberry and cloudberry cell cultures, he asked what they tasted like. After all, they’re effectively just the fruit of a plant, grown in a cell culture rather than on the vine or bush. His colleagues’ response? “We don’t know. You’re not supposed to eat anything in the lab,” Reuter says.

His question sparked a conversation about what it would be like to grow plant cell cultures that could be eaten in cell culture form—and eventually led him to taste the cells. Currently, plant cells are used as chemical “factories” for drugs, cosmetics and even some food flavoring and coloring. For example, cultured saffron has been used for both food flavor and color: the saffron-producing crocus can only be harvested for about a week each  year, mostly in Iran, and has low yield, making it the most expensive spice in the world, whereas cultured saffron can be produced all year round.  But in those applications, the chemicals are extracted from the plant cells. The idea of using them as-is had been discussed before in labs, Reuter says, “but there was always this assumption that the price would be too high, because we assumed that you would have to grow them in bioreactors in the lab.”

Reuter’s team had a new idea: what if plant cells could be grown for food by regular people working outside the lab? They started the project using some of the berry cell cultures from the lab, including the Arctic berries native to Finland.

After all, plant cells like the kind you find in the berries you eat require relatively little to grow: just minerals from the environment, water and sugar to replace what a traditional plant would make through photosynthesis. What they produce from these simple ingredients are a host of beneficial micronutrients that can be eaten in a delicious form: flavorful, brightly colored plant cells that have a texture sort of like pureed fruit, and can be added to foods like yogurt or smoothies. “We just kind of changed the way we thought about our cell cultures. We had been thinking about them as cell factories for pharmaceuticals,” Reuter says. “But all of a sudden we started to see them as foodstuffs.”

The team made waves when it released a prototype in late 2016 under the name CellPod. Their at-home bioreactor design is about the size of a table lamp and can produce about two cups of cell culture each week, in a self-contained plastic bag. Users insert the bag, which contains the cell starter, add water, and turn on the bioreactor. It will keep the culture at optimal conditions for growth. The cells can be added to smoothies, mixed into yogurt or eaten by themselves as supplements, Reuter says

When he finally got to try the culture, he was underwhelmed: whole plant cells have a “very mild, neutral taste,” he says. “Cells have this kind of cellulose wall around them, so they are, in a way, capsules with the good stuff in there.”

The team has solved this problem by making what Reuter calls “cell jam,” literally crushing up the cells to release their tasty insides. At this point, the bioreactor doesn’t do that step itself, but Reuter says he’s gotten good feedback from eager members of the public who volunteered to be taste testers. He says people seem more comfortable with the idea of plant cell culture than with the idea of cultured meat—after all, the idea of growing plants at home is a familiar one.

When Niko Räty, a recent graduate from design school, was hired to design the home bioreactor, he initially thought he would be designing a small tabletop garden. Once he’d grasped what the project was, he saw the need for a design that looked familiar and accessible. Outside of home-brewed beer and home fermentation—things that rely on naturally-fermenting bacteria, rather than cells that are normally grown in a plant—bioreactors have mostly been found in laboratories. Räty drew on his background in furniture design to create a small pod with rounded edges that resembles a lamp. He says he wanted to make the high-tech device fit in to a kitchen, “so it wouldn’t be so scary.” He also designed it with a plant light, so that owners could grow herbs around it.

“I really hope that people get back to the center of food production,” Räty says. He designed the home bioreactor to help people feel more connected with their food. Räty envisions it at the center of a tiny in-home garden that would give people easy access to fresh-from-the-source produce. It might be like a “Spotify of food production,” where you could receive different plant cells from a subscription to grow a range of foods. As a creator, the project’s novelty excites him, but its potential for promoting good conservation practices is also important, he says.

Although this all might sound strange to somebody used to eating fruits grown on a vine or bush, from another angle it’s just a different kind of agriculture—and after all, humans have been increasing crop yield via careful plant breeding and cultivation for thousands of years. And beyond its immediate benefits of providing out-of-season foods from close-to-home, plant cell agriculture could allow us to grow highly nutritious plants that are currently impossible to cultivate for food.

Reuter says expanding the human diet is an essential part of the idea. Of the almost 400,000 species of plants, disregarding lichen and algae, human beings only eat around 3,000. Just a few of these make up most of what’s grown and consumed, known as “staple crops,” and climate change threatens their health. “We’re using a small fraction of the diversity that we could be using,” he says. Small-scale bioreactor technology could change that by allowing people to grow plant cells from previously difficult- or impossible-to-cultivate, but nutritious, plants. Arctic berry plants are at the top of VTT’s list: Arctic bramble, stone bramble and cloudberry cells were some of the first cultivated in the bioreactor. These plants, which are adapted to survive in hostile conditions, contain high levels of nutrients. They’re difficult to grow outside the Arctic and impossible to cultivate except in certain seasons. Many of the berries are also very small, which complicates harvesting.

The team at VTT is currently studying how the chemical properties of plant cell cultures compare to those of “traditional” plants and berries. “The cultured cells are not identical to the corresponding plants or parts of plants where they are generated from,” Reuter says. “They do produce many of the valuable complex biomolecules the plants themselves are making, but many times in different compositions.”

Of the bioreactor, University of Bath engineer Marianne Ellis says, “It’s a very good idea, in terms of the size.” Ellis, who works on bioreactor design, thinks the small scale of the VTT team’s device is more achievable than the scale that would be required for industrial production. But she also sees potential difficulties with helping home bioreactor users to create cultures, such as maintaining sterility in the bioreactor and keeping the costs of supplies low enough. “We really don’t have a cost estimate yet,” says Reuter. The team is aiming to make a single serving of cells cost about the same amount as a serving of conventional berries—whether that cost is buying a capsule for a home machine or buying a pre-grown serving of the cells.

Ellis and Reuter both see a middle ground: “microbrewed” plant cell cultures available at a local seller that makes something like smoothies. The final format of the bioreactor would remain roughly the same, just scaled up, Reuter says. That means the bioreactors would be larger, but still very small by industrial standards.

It’s a promising experiment in the future of food. People are excited, Reuter says, about the nutritional potential of previously unavailable berries, but also about the flavor potential. “What I think should be the purpose is not to make it taste like the actual [berry],” he says, “but make it go beyond that.”

VTT is still working on the project and hopes to find a buyer that will take it to commercial scale. In the meantime, however, they’re getting to the bottom of a difference they discovered between cultured plant cells and those grown from a plant: when Reuter finally got to taste the fruits of his labor, he found that they often didn’t taste like the plant they were cultured from. For example, strawberry cell jam, made from undifferentiated plant cells rather than the berry cells specifically, tastes more like a lingonberry, he says. A culture of Arctic bramble has a woody flavor, and some other cultures taste a bit like cabbage.

“We are not merely reproducing the plant in a bioreactor, but growing a very different kind of ‘berry,’” says Reuter.