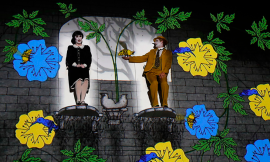 The festival opens on May 24 and runs until mid-July

Moscow is slated to host the International Chekhov Theater festival for the 13th time, while the organizers are celebrating its 25th anniversary, Valery Shadrin, head of the festival, told TASS.

The event kicks off on May 24 and runs until mid-July. Among its participants are directors Peter Brook, Robert Lepage, Philippe Genty, grandson of the great Charlie Chaplin James Thierree, and other world renown artists.

“Despite its 13th run, the upcoming festival is a jubilee for us,” said Shadrin, recapping that so far the organizers have been able to bring over 500 shows from 52 countries to Moscow, as the festival has earned its spot among the world’s biggest theater forums.

This year, theatergoers will be able to see 22 shows over the course of two months, with some of the productions going on the road to Yekaterinburg and Voronezh.

The Chekhov festival runs every other year, since the preparation that goes into putting together a program of this magnitude demands a lot of effort and human resources.

Ahead of the the event’s launch, an outdoor photo exhibit has been set up in Moscow, showcasing more than 80 memorable images from over the years.

The festival opens on the new stage of the Bolshoi Theater with Mozart’s The Magic Flute, brought to Moscow by the Komische Oper Berlin. “It just so happens that the Komische oper is celebrating the 25th anniversary of establishing cultural ties between Moscow and Berlin, ” Shadrin noted.

As always, France is fully represented at the festival. The Comedie Francaise Theater is bringing Victor Hugo’s romantic drama Lucrezia Borgia directed by Denis Podalides to the Moscow stage. Also from Paris, the Theater de la Ville will show Six Characters in Search of an Author by Luigi Pirandello directed by Emmanuel Demarcy-Mota. The Theatre Bouffes du Nord brings Peter Brook and Marie-Helene Etienne’s production of Battlefield, based on the ancient Indian epic Mahabharata and the play by Jean-Claude Carrier.

And then there are those, who will be at the festival for the first time such as Ivo van Hove, Dutch director. “Theater fans from around the world have been closely watching his art for a long time, and our audiences will see his production the Secret Power, based on a novel by Louis Couperus.

For the first time, Acosta Danza, a Cuban dance troupe has been included in the program.

Another project in the program of the 13th Festival is ‘Demon’ based on the works of Lermontov’s Demon and Hero of Our Time. The performance was carried out in conjunction with the State National Russian Drama Theater. Ch. Aitmatova (Kyrgyzstan) with the support of the Intergovernmental Foundation for Educational, Scientific and Cultural Cooperation (IFESCCO). The play’s director is Vladimir Pankov.

This year’s Chekhov Festival is dedicated to the 100th anniversary of the outstanding stage director, and master stage performer, Yuri Lyubimov (1917-2014). Anatoly Vasiliev was offered to direct the tribute performance and he chose Ernest Hemingway’s story The Old Man and the Sea. Rehearsals are underway, in conjunction with the Vakhtangov State Academic Theater. The world premier is scheduled for the festival’s closing on July 19 and 20th.