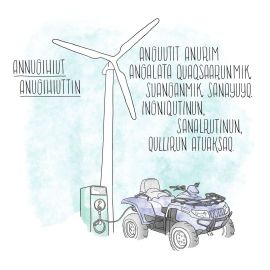 Canada’s Northwest Territories comprise one of the fastest-warming regions of the Arctic. Here, residents see spring arrive weeks earlier than it used to, while the ground beneath their homes thaws and slumps. Yet while much of the world talks about solar power, wind energy and other sustainable energy technologies to slow climate warming, Inuvialuit communities can’t do the same—at least not in their indigenous language, because the words for these options don’t exist.

Sheena Adams is partnering with Inuvialuit elders to change this, by creating a vocabulary around renewable energy in their language of Inuvialuktun. About 20 percent of roughly 3,100 Inuvialuit people speak this language conversationally today, with most also speaking English. This means the project has twin goals: to draw attention to renewable energy options, as well as to help revitalize a declining language, says Adams, a graduate student in environment and sustainability at Royal Roads University in British Columbia.

“There is a big push to help restore those languages because, like a lot of indigenous languages in the world, we are losing them,” she says. “So I thought this would be a good way to support that movement while promoting renewable energy and conservation.”

Adams also works as the regional energy project coordinator with the sustainable energy nonprofit Arctic Energy Alliance based in Inuvik, a town of about 3,300 people that includes a substantial Inuvialuit population. Last Spring, Adams reached out to 10 elders from this town and five others in the vicinity to tackle the project together in Inuvik. “When we started this, we didn’t know if they’d be able to create all these words,” Adams says. “Sometimes modernization can’t happen.”

But Inuvialuit people are deeply connected to the land, so they already had existing words to work with that made their language naturally adaptable to modernization through this route, Adams says. “I’m not sure it would have been so easy if you were talking about cancer or something like that,” she adds. Through a workshop that lasted several days, the group was able to create a total of 186 terms across three dialects, including annugihiut anugihiuttin for ‘wind turbine’ and siqiniqmin aullan for ‘solar panels.’

Beverly Amos, an Inuvik resident who works at the Inuvialuit Cultural Resource Centre and helped Adams on the project, emphasizes that the concept of conservation has always been central to her culture. “At one time, before contact with the Europeans or other races, we had our own form of conservation for anything, including energy,” says Amos, whose organization works to preserve and rejuvenate the Inuvialuktun language.

That means that words around sustainable living do exist—they just need to be updated to fit the modern technologies, Amos explains. “It’s just finding them back and finding the best way to use them for this day and age.”

In most cases, the new terms were compound words that put together existing terms in novel ways, just as the English words “solar” and “power” are combined to described that technology. The word for “wind,” for example, already existed in Inuvialuktun, as di the word for “turbine” (though in this language, it refers to the wings of a dragonfly). “The roots of the words are ancient,” Amos says.

Adams partnered with artist Emma Segal to design illustrations that would explain some of the key terms, with funding from the Arctic Energy Alliance and the Inuvialuit Community Economic Development Organization. Over the next six months, Adams will travel to the six participating communities to share the terms and illustrations that she plans to print on mugs, t-shirts and other materials to distribute as gifts to schools. She hopes that getting the words into people’s homes and in the hands of children will help weave them into conversation.

Igor Krupnik, an Arctic ethnologist with the Smithsonian National Museum of Natural History, points out that pressure to use English has largely weakened Inuvialuktun and other indigenous languages in Alaska and Canada. For him, the value in creating these new words is that it at gives Inuvialuit people options to continue using their own language when describing these modern technologies. “If someone develops a word for ‘wind turbine’ in their language, that is good, then they don’t have to use an English word,” Krupnik says.

Albert Elias, a 75-year-old elder involved in the project, is optimistic that the project will help reinvigorate the language he grew up speaking. “It’s a real challenge to try to revive it and try to have younger people speak and understand it because there are so many other influences,” Elias says. “People my age still have our language fluidly, but there are not many of us.”

Elias thinks that, once popularized, the terms could also help bring about more interest in renewable energy in the region that still predominately depends on oil and gas. “Once you start talking about it, sooner or later something might happen, eh?” he adds.

Adams was surprised by how much the elders seemed to learn about renewable energy through the workshop, and was pleased by their excitement to be involved.

Interestingly, the biggest crowd-pleaser wasn’t a word she asked them to translate, “but they came up with it and decided it was their absolute favorite,” Adams say. That word was taniktuun, which translates to “collaborative learning.” Their definition of taniktuun is: “Working together, we learn and get smarter.”

Amos echoes that sentiment, noting that if it takes working with outside groups to help reinvigorate her language, then she is all for it. “I’m glad for the assistance,” she says. “Sometimes that’s the only way to get our message across is by using non-Inuvialuit organizations, and we help each other. You know, that’s working together.”