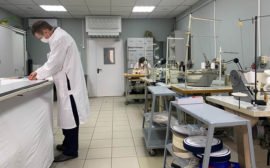 The call came just after 9 pm on a Monday, as Nataliya Kharitonova was heading into one of her two textile factories to take stock of supplies.

Kharitonova, 40, founded Tekstil Komi 18 years ago in Syktyvkar, the capital city of the republic of Komi in Russia’s northwest. The company produces household linens — pillows, mattresses, towels — that are sold across the country.

But the coronavirus crisis meant an unusual customer was on the phone that evening. It was Syktyvkar’s mayor, Nataliya Khosyainova, who peppered Kharitonova with a quick-fire round of questions about a product her company had no previous experience producing: medical masks.

Would she be able to make them? the mayor asked. If so, how many? And most importantly, how quickly?

Kharitonova took on the task without hesitation. After the call, she set up a Skype video session with her deputy director, head of design and two other specialists. They spent the next two hours cutting up material and experimenting.

Then, early the next morning, the team rang up epidemiologists at Syktyvkar State University. The experts told them that to make a reusable mask, they would have to use material that could be boiled for 15 minutes in an alkaline solution to kill off the virus. The masks could then be dried and reused up to 30 times.

Within 48 hours, Tekstil Komi started producing between 5,000 and 6,000 masks a day, Kharitonova said. Its two factories are now humming from 7 am to 11 pm and are only shuttered on Sundays.

“We leaned on our war-time history,” Kharitonova told The Moscow Times. “I remember the lessons we had in school when I was a kid about how to prepare in emergency situations. That’s what we’re doing now.”

The mayor’s call came on May 16, just hours after Komi had reported its first case of the coronavirus. The next day, President Vladimir Putin judged the coronavirus situation in Russia to be “under control.”

But behind the scenes, Russian officials were mobilizing to prepare for the coming storm. With the pandemic at that point having already devastated countries like Iran and Italy, Khosyainova gave Tekstil Komi’s owner the unvarnished truth: the city had to prepare for the worst.

As coronavirus cases and deaths related to the virus have begun to tick upward in Russia in recent days, medical experts have questioned whether the country’s healthcare system — plagued by a lack of funding and outdated resources — can handle a pandemic that has so far killed nearly 38,000 people worldwide.

Before the pandemic even hit, Russia’s healthcare system was stretched so thin that doctors and nurses across the country had for years complained that they had to ration personal protective equipment (PPE).

On March 16, the same day Syktyvkar’s mayor called Kharitonova, the general director of Mat i Ditya, a chain of 42 pediatric clinics across Russia, wrote to Health Minister Mikhail Murashko. The director asked if he could get help acquiring PPE, according to a copy of the letter published by the Baza Telegram channel.

“The available stocks have been fully used up,” Mark Kurtser wrote to the minister.

Still, some experts have noted that, from Soviet times, Russia’s healthcare system has been built on the basis of “militaristic” mobilization — and that this know-how could help the country rise to the daunting task. Earlier this month, for instance, Russian prisoners, students and military personnel were ordered to produce medical masks and other equipment.

“Of course we don’t have enough money for everything in our medical care system, but if we talk about emergency mobilization, this still works and it works well,” Yury Krestinsky, a former Health Ministry official who now leads Sberbank’s healthcare business, recently told The Moscow Times.

The rate at which Tekstil Komi and other factories have revved into gear suggests that might be true.

Earlier that same day, Andrey Lazarev, the director of the Reutov Experimental Plant for Prosthetics located in the town of Reutov just outside Moscow, said the company began experimenting with making single-use masks. No longer able to find them for purchase anywhere, they decided to use their equipment to make them for themselves, Lazerev recalled during a recent tour of his plant.

Word got out quickly. That evening, Lazarev received a call from a local Reutov administration official with a request: Could the plant also produce the masks for state institutions, including the local police, clinics and schools?

Now, the plant is producing single-use masks at a rate of 1,000 per day and planning to double output in the near future. The company bought up enough raw material to produce at that rate through August, but all of its suppliers are now out of stock, Lazarev said.

Not every region has leaned on its local factories. In the southern region of Stavropol, the region’s Deputy Health Minister Olga Drozdetskaya recently told residents that, as they wait for pharmacies to restock, they should sew their own masks.

Nonetheless, other regions are picking up the slack. Last week, the governor of Ivanovo, Russia’s historical textiles capital, announced that the region has tasked seven companies that have previously not made medical masks to begin production to help support the rest of the country.

Ultimately, though, the most pressing task facing local officials is finding a way to protect their own charges. Kharitonova, for instance, said she signed a contract with Syktyvkar’s mayor agreeing not to sell her new masks outside Komi.

The agreement didn’t bother her, Kharitonova added, even though she has clients in other regions, because she feels a responsibility to step up for her home.

“We have a saying up here,” she said. “Made in the north by northerners for northerners.”